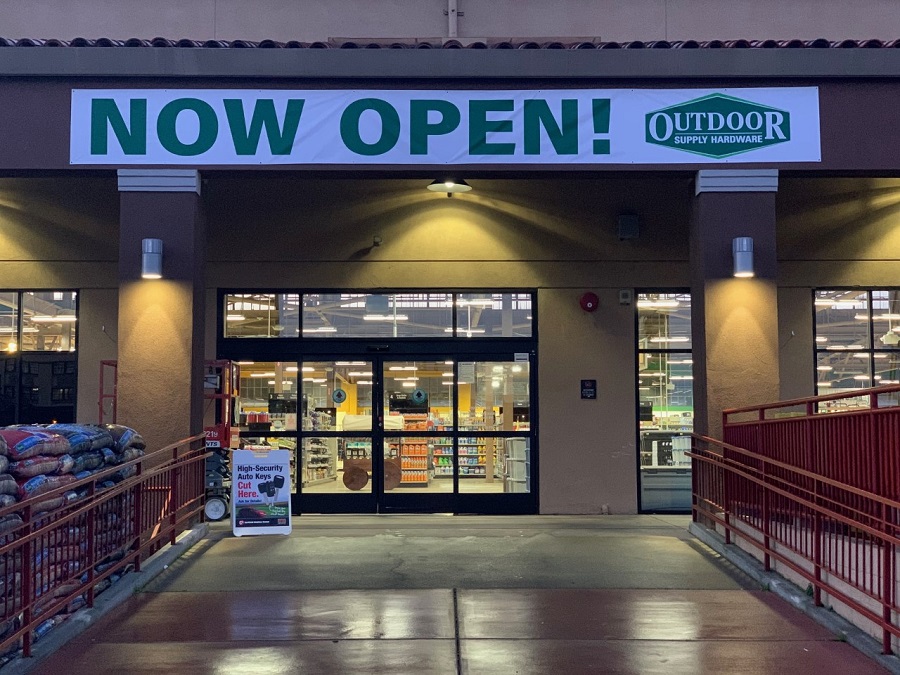 “We are thrilled to be in Berkeley,” Sieggreen added. “This store is the fourth Outdoor Supply Hardware location our company has opened since September and we have been so appreciative of the positive support and feedback we have received from customers. The Berkeley location was chosen because we knew it had been an important store for the local community and a busy store for Orchard. When it became available, we were very excited to get started with the project,” he said. A recent visitor to the soft opening reported that the new store is very much like Orchard Supply Hardware. CNRG is a multi-format, multi-brand retailer operating 108 hardware stores, home centers and lumberyards in 15 states across the U.S. Outdoor Supply Hardware, 1025 Ashby Ave. (at San Pablo), Berkeley. Phone: 510-495-0163. Hours are Monday through Saturday, 7 a.m.-9 p.m. and Sunday, 8 a.m.-8 p.m.

THE SINK FACTORY A fixture in Berkeley for over 40 years, the Sink Factory is moving, but it’s not going far. It’s slated to re-open next month just a few blocks north of its current location at 2140 San Pablo Ave. Owner Ragnar Boresen said the business is being pushed out of its space, as well as other businesses on the block, to make way for new development. The Sink Factory has been serving the Berkeley community with specialized, antique plumbing services and parts since 1979. The building that houses the showroom has an interesting history as it has been a silent-movie theater and, in the 1960s, the Steppenwolf Bar. The Sink Factory was established in April 1979 and Boreson started working there in 1981, became partner in 1985 and sole owner in 1989.

“With great sadness we must inform all, due to reasons beyond our control, that we are moving from our beloved space. The planned buy-out of not only our business but several businesses that line our section of San Pablo Avenue is coming much sooner than later. We must relocate [as fast as] possible,” Boreson said. He added that he attempted to renegotiate his lease a year ago when the landlord told him that the building was being sold for redevelopment but was unsuccessful. The business has been on a month-to-month rental since then. Boreson has spoken to the developer who is buying the building and was told the redevelopment project was set to begin in Spring 2021.

The business was not given an official move-out date, but Boreson felt an urgency to move and to re-establish his business elsewhere. The proposed new space is at 1826 San Pablo Ave. (at Hearst) just a few blocks north of its current location. “Moving my business to this new location gives me a fresh start to re-invent myself,” Boreson said. The Sink Factory is on track to re-open there on Feb. 1. With a larger showroom, Boreson plans to expand the parts-and-service department and continue to stock a large selection of traditional and reproduction pedestal sinks and basins.

The Sink Factory is asking the community to help the business stay in Berkeley and make the move to the new location and has launched a GoFundMe campaign with a fundraising goal of $100,000. “Any and all contributions will assist with our deposit, moving and setup costs, transferring inventory and purchasing machinery such as a new lathe and exhaust booth to help us maintain efficient service for our customer base. We are filled with gratitude for all who have supported our small yet growing business over all of these years,” Boreson said. The Sink Factory, formerly at 2140 San Pablo Ave. (at Cowper Street), Berkeley. Beginning Feb. 1, it will be at 1826 San Pablo Ave. (at Hearst Avenue). Phone: 510-540-8193. Open Tuesday through Saturday, 9 a.m. to 5 p.m. Connect on Facebook and Instagram.

BERKELEY SPORTS Berkeley Sports, which had been in business on Bancroft Way, opposite the UC Berkeley campus, for more than 50 years, closed its doors in late 2019. The store, which sold sports gear and shoes and serviced tennis rackets, was founded in 1968 by Tom Voisen and was last owned by Mike Inouye, according to a February 2018 article in the Daily Californian. No information on exactly when and why the store closed was available. The store scored well on Yelp with customers praising, in particular, the friendly service. “An indispensable Berkeley institution,” wrote TK L. in June 2018. “Mike is incredibly knowledgeable, especially on racquet sports. Stores like this one beat big box stores and online shopping every time.” A Berkeleyside reader who got in touch in November to alert us to the closure, said: “I live around the corner and used to stop in monthly and have fond memories of Mike Inouye. I hope he is OK.”  If anyone has more information about when and why the store closed, feel free to post a comment below. Berkeley Sports was at 2254 Bancroft Way (at Ellsworth Street), Berkeley.

If you’re a Berkeley business with news to share, or you’ve noticed a new or closing business in Berkeley, email [email protected]. Read more Shop Talk columns. Catch up with food- and drink-related business news on Nosh.

Berkeleyside relies on reader support so we can remain free to read for everyone in Berkeley. Become a member and be part of the future of independent, local journalism.

The Laugh Factory launches ‘STAND UP TO VIOLENCE!’