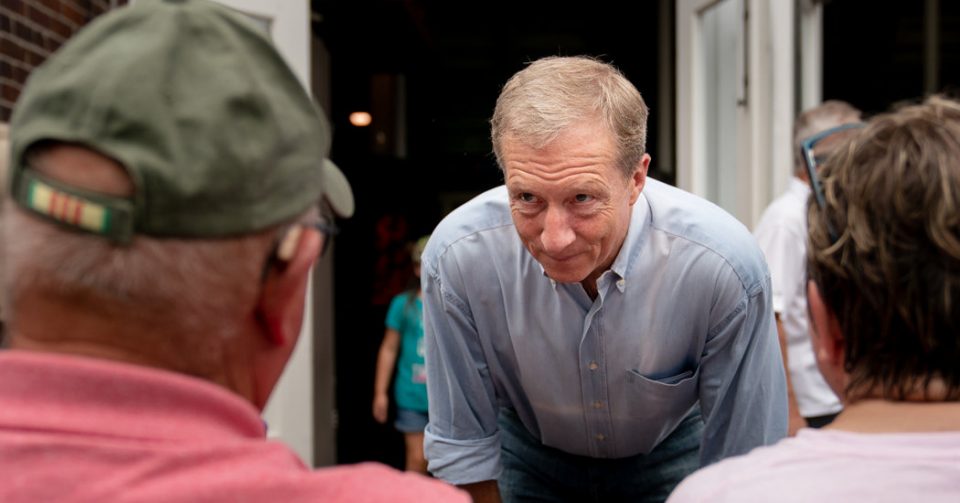 I love meeting Americans. Before I ran for president, I had the opportunity to meet people across the country while fighting climate change, registering young people and working to impeach President Donald Trump. I loved hearing their stories and learning about their lives. Some — a lot — of their stories were harrowing. Many felt disconnected and left behind by the political establishment and elites in New York and Washington.

Most people I met felt that the government was broken and that their vote didn’t count because of a corporate stranglehold on our democracy. I learned something from every encounter and I valued every interaction.

People who don’t know me think I must enjoy a life much like Mr. Trump’s. Golf, sycophants and luxury. I don’t. The grass-roots work I have done for a decade, and my presidential campaign, exposed me to people, places and problems I didn’t know much about before — and to new solutions and ideas.

I didn’t know, for example, ReGenesis — a spectacular environmental justice project — in Spartanburg, S.C., or Harold Mitchell, the man behind it. Now I do, and I feel richer as a result. I didn’t know the working conditions of unionized mental health nurses in Iowa. Now I do, and I’m angry and upset for them. I didn’t know Alex Brown and the history of the Gullah and Geechee people on Hilton Head Island. Now I do, and I share their frustration and sense of injustice.

Meeting Americans has reinforced my sense of deep governmental failure. Whether it’s the warp-speed gentrification of Charleston, the homeless problem in Los Angeles or water pollution in Denmark, S.C., Americans deserve so much better from their government. We can afford it. We know better. And it’s the right thing to do.

And people ache for a democracy they can believe in. During my campaign, I tried to call out the intertwined elites in the media, the Beltway and corporate America, all of whom are thriving at the expense of the American people. They don’t want to change a single thing. Corporate America has truly bought our democracy, and people across this country are suffering every day because of it.

Let me be clear: I understand that I have benefited from being part of this world. But this campaign has reinforced my passion for spending all my time and money to change the political neglect that has brought this nation to a very low place.

The unwillingness of our government to treat people fairly across racial and ethnic boundaries was especially jarring to me. If you love Americans, watching cruelty based on race — in virtually every aspect of life — is unbearable. It’s even worse when it’s casual and unnoticed. I sat in the dining room with black residents of Denmark, S.C., who were literally being poisoned by the water coming out of their taps while being ignored by their government for years.

I’ve heard the exact same story from Latino communities in the San Joaquin Valley. I listened to Native Americans ask that their deals with the federal government be just partially met — they were not even demanding full compliance. I listened to an African-American entrepreneur in Nevada tell me he could only get bank financing for his venture at an extortionate rate. He called it “a tax on being black.”

I talked about race and racial justice, because I believe that out of narrative comes policy. The establishment has failed so many decent, hard-working people — if we don’t call it out, aggressively and repeatedly, nothing will change.

Nowhere is that more evident than on the issue of climate justice. The Trump administration and the Republican Party support fossil fuel interests because doing so dovetails neatly with their political needs. As the founder of the Need to Impeach movement, I assure you I find this behavior — which endangers every American — beneath the contempt of any true patriot.

But during the campaign, I also participated in multiple media-sponsored debates where few questions were asked about climate change, where foreign policy discussions raged without any mention of climate change, and where the prevailing atmosphere diminished the importance of our climate crisis, when not ignoring it altogether.

The awareness that this is a human crisis with substantial racial subtext — America disproportionately poisons its black and brown citizens — seems not to have penetrated the elite enclaves in New York or Washington. That has to change.

The campaign reinforced my deep misgivings about how the elite media, political insiders and big corporations have an impact on our democracy. I watched as the Democratic National Committee ignored public appeals from me and others to change the debate process to ensure a more diverse group of candidates made the stage, only to change the rules a few weeks later to allow Mike Bloomberg to participate in the debates.

I was also dismayed at the relentless focus in the media on money, polls and the horse race — and was heartened that the vast majority of questions I got from people on the campaign trail focused on the issues relevant to their lives.

My ultimate takeaway from this campaign was how much I learned from and loved the people I met. I never thought it was “grueling” or a “marathon.” I thought that it was a joy, that it taught me invaluable lessons and made me a better person. I’ve traveled the United States full time for over seven years now, and my heart and soul are with the people I’ve met on the trail. I look to them for wisdom, strength and compassion.

The reasons I got in the race for president — economic, racial, and environmental justice — kept me focused and determined, and I’ll never stop working toward them. I started one of the biggest grass-roots organizations in the country — NextGen America — which registers voters for progressive causes and candidates. The group continued working during my presidential run and I will return to leading it now.

Registering and engaging voters is how to affect races up and down the ballot. The electoral process is still our lever for change in a democratic country. We need new and different people in charge if we want to make real change.

Real change will start with mobilizing to stop Donald Trump from being re-elected and Mitch McConnell from running the Senate. Real change will continue when we create a national commission on race to decide the best way to implement reparations, and declare a climate emergency so we can finally address this crisis.

I am no longer a candidate for president, but I remain as committed as ever to organizing — and winning — these fights on behalf of the American people.

Tom Steyer is the founder of NextGen America and a former Democratic candidate for president.

The Times is committed to publishing a diversity of letters to the editor. We’d like to hear what you think about this or any of our articles. Here are some tips. And here’s our email: [email protected].

Diesel under K3 per litre since December 2017