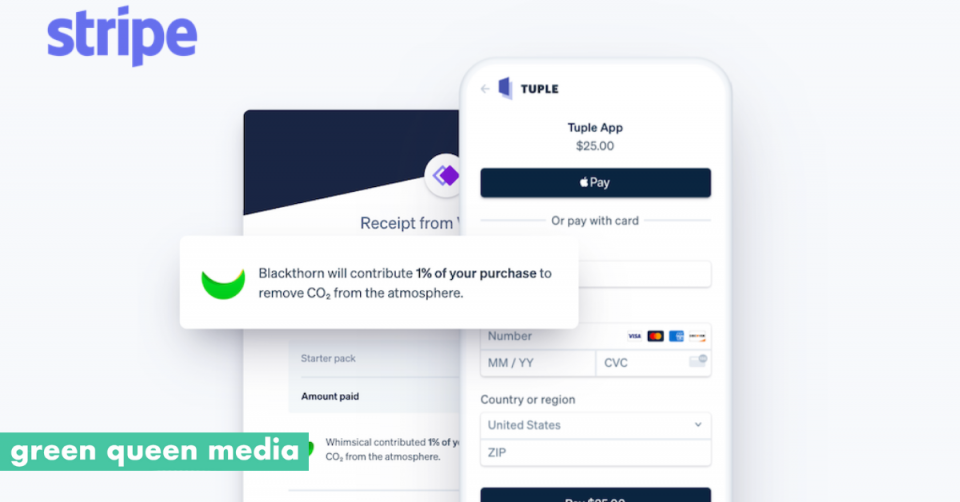 Stripe, one of the biggest online payment processing providers, has just launched a carbon removal purchase tool to allow any internet business running on its platform to contribute funds towards carbon-friendly projects. Called Stripe Climate, the new tool is the first large-scale initiative of its kind and will not take any fees from the funds going towards carbon removal projects.

Launched in late October, payment processing software giant Stripe’s new climate tool will enable any e-commerce business to contribute a portion of funds to technologies that directly removes carbon emissions from the atmosphere. Stripe users can opt into the initiative without writing an extra line of code after just a few clicks, in a move that the company hopes will encourage more internet businesses to pool resources for “coordinate meaningful climate action”.

Many of our users have told us they want to take climate action, but don’t because figuring out what to do can be time-intensive and complicated. Stripe Climate makes it easy for businesses of any size to help tackle climate change by funding frontier carbon removal.

Stripe says that it won’t be taking any fees for Stripe Climate contributions, with 100% of the funds directed towards technologies focusing on accelerating carbon removal. The capture and storage projects were selected in May this year and include Switzerland-based Climeworks, CarbonCure in Halifax, Canada, and Charm Industrial and Project Vesta, both based in San Francisco.

Commenting on the launch, Nan Ransohoff, head of climate at Stripe said: “Many of our users have told us they want to take climate action, but don’t because figuring out what to do can be time-intensive and complicated. Stripe Climate makes it easy for businesses of any size to help tackle climate change by funding frontier carbon removal.”

According to the firm, 25 businesses have already joined the program since Stripe Climate’s beta launch in August, resulting in hundreds of thousands of dollars committed to carbon removal technology. The fully launched version is currently available within the U.S. and will be launching in more markets in the next few months.

The world will likely need to both radically reduce the new emissions put into the air, and remove carbon already in the atmosphere. Yet investments in carbon removal technologies have been startlingly minuscule for years.

Given the severity of the climate crisis, scientific models agree that achieving net-zero emissions by 2050 as outlined under the Paris agreement to limit temperature rise to 1.5°C above pre-industrial levels is necessary, but will require drastic measures on top of a rapid phasing out of fossil fuels and shifting away from carbon-intensive animal agriculture.

“The world will likely need to both radically reduce the new emissions put into the air, and remove carbon already in the atmosphere,” said Stripe in a statement. “Yet investments in carbon removal technologies have been startlingly minuscule for years.”

“But the millions of businesses running on Stripe, collectively, can help grow and sustain this new industry. Our goal is to create a large market for carbon removal. If successful, this market will accelerate the availability of low-cost, permanent carbon removal technologies, and increase the likelihood that the world has the portfolio of solutions needed to avoid the most catastrophic effects of climate change,” added Ransohoff.

Among some of the companies that are using Stripe Climate include freight forwarder Flexport, online publishing platform Substack, software firm Flipcause and ski reporting and snow forecaster OpenSnow.

“We want to give all Substack writers the opportunity to join us. Stripe’s climate initiative is a gift because it removes all barriers to positive action. This program makes it easy, and valuable, to do the right thing,” said Chris Best, co-founder and CEO of Substack.