I’ll confess: When I spoke back in September 2019 to Mark D. Wiese, the manager of the Gateway Deepspace Logistics Project, about building a deep space commercial supply chain to support the Artemis Mission, I was rooting for FedEx or UPS to get the logistics contract to deliver cargo to the Gateway space station.

I had this fantasy of UPS and FedEx drivers jumping out of their delivery trucks wearing space suits and getting a signature from the astronauts before rocketing back to Louisville or Memphis. If you’re not familiar with the initiative, the Artemis Mission aims to a female boot on the moon by 2024. It’s literally a moonshot.

It didn’t quite work out that way, and it seems a little old news now, but last spring, NASA awarded its first logistics contract to SpaceX. SpaceX was also one of three contractors selected to develop a launch and landing system for travel to the moon and Mars. 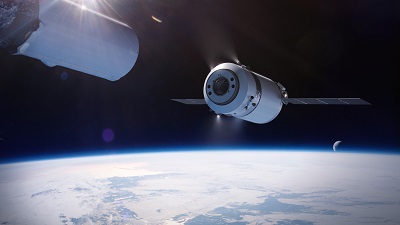 According to the space agency, “SpaceX will deliver critical pressurized and unpressurized cargo, science experiments and supplies to the Gateway, such as sample collection materials and other items the crew may need on the Gateway and during their expeditions on the lunar surface.” The terms of the contract, “enables NASA to order missions for as long as 12 years with a 15-year performance period and provides the ability to add new competitive providers. These missions will support NASA’s plans for sustainable exploration with both international and commercial partners, while developing the experience and capabilities necessary to send humans to Mars.”

Finally, NASA says that during the contract, it is planning multiple supply missions in which the cargo spacecraft will stay at the Gateway for six to 12 months at a time. These firm-fixed price, indefinite delivery/indefinite quantity contracts for logistics services guarantee two missions per logistics services provider with a maximum total value of $7 billion across all contracts as additional missions are needed.

Before the holidays, I had a chance to check back in with Wiese to learn a little more about the contract. SpaceX, he told me, would use its Dragon XL capsule as the cargo module atop the large Falcon rocket. “It’s a large vehicle, on the order of a tractor trailer or an intermodal shipping container,” Wiese told me. It will carry about 3.5 metric tons inside the container with another metric ton or so stored outside. It will dock with the Gateway in lunar orbit and then burnup on the return trip. “You need a heat shield to survive coming back into the earth’s atmosphere and right now, we don’t need the return capability,” Wiese said. “We do see a future, however, where we’ll want to bring things back from the moon.”

At the moment, NASA is working with SpaceX to understand how the cargo vehicle will interface with the Gateway space station. When it begins operations, the agency plans a yearly trip, with the cargo module departing about a week ahead of the crew. Initially, the cargo module will stay in space for 30 to 60 days, potentially extending that to 3 or 6 months over time. “If we extend the stays, we may need to send two modules,” Wiese said.

While the landing module is still in development, the project, Wiese said, “is full speed ahead to have the first woman and a man on the moon in calendar year 2024.”

As we were ending the call, I joked that NASA should simply have signed up for Amazon Prime – perhaps they could’ve gotten next day delivery to the moon. When I shared my FedEx and UPS fantasy, he said that it’s not as far-fetched as I may think. “DHL, UPS and FedEx are getting excited about space,” he said. “They’re now attending our conferences. The attention we’re getting from companies outside the typical commercial aerospace circles is exciting. I think NASA is on the cusp of a new model, and a new way for companies to get involved in space that we’ve never seen before.”

Bob Trebilcock, editorial director, has covered materials handling, technology, logistics and supply chain topics for nearly 30 years. In addition to Supply Chain Management Review, he is also Executive Editor of Modern Materials Handling. A graduate of Bowling Green State University, Trebilcock lives in Keene, NH. He can be reached at 603-357-0484.