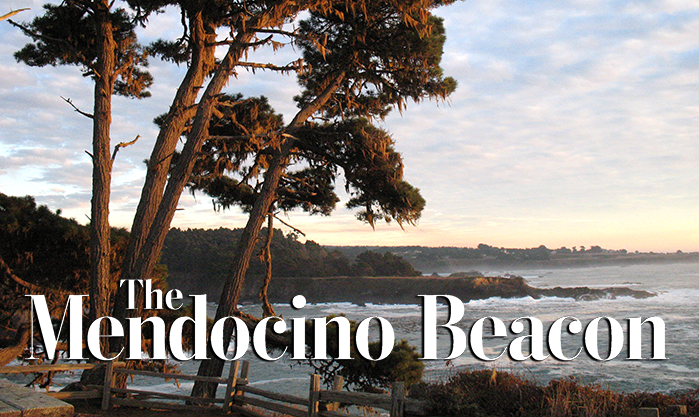 • We are authorized to announce that the steamer Emily will arrive here every ten days on her way from San Francisco to Coos Bay and also on her return. Passengers and freight will be carried each way.

• Mendocino is at present suffering from a butter famine. The delicacy cannot be had at any price.

• The steamer Record arrived here Thursday with freight and will load lumber for San Francisco. The Record will make weekly trips from the city to this and other ports on the coast.

• On Sunday, Jas. Miles and Willis Keller, who are hunting and trapping on Big River about seven miles from town, succeeded in killing two large panthers.

• The steamer Whitesboro arrived here Thursday of last week but was compelled to put to sea again immediately on account of heavy seas. She remained outside for several days before she could come in and unload freight and load with lumber.

• The roads in the northern part of the county are reported to have suffered heavy damages during the past two weeks of bad weather, especially the new road leading from Dos Rios to Covelo. The stockmen in the Round Valley section are said to have lost considerable stock, especially hogs, about a thousand head on some of the ranges having been victims of the storm. At Sherwood, over 30 inches of snow was reported on Monday.

• Miss Naomi Nichols, we are glad to state, is safely recovering from her recent severe attack of pneumonia, and will be able to be up and around in a short time.

• Sheriff Byrnes and Deputy Sheriff F. L. Clay were in town Saturday. Both were busy rounding up the alleged blind piggers (ed. note: illicit sellers of intoxicants) along the coast recently indicted by the grand jury.

• Abram B. Snider passed away at the home of his daughter, Mrs. Mamie King of Mendocino, Friday afternoon, January 4, at the advanced age of 92 years, 7 months and 10 days. He is one of the old pioneers of California, where he spent 80 years of his life, approximately the greater part of 54 years being at Westport, Calif., where he engaged in farming and teaming, and at one time was owner and proprietor of the Westport hotel.

• Mr. and Mrs. Clarence Galletti moved to Boonville this week Clarence having bought the Boonville Lodge at Boonville from Ruben Baldecchi, who is moving back to Elk.

• Miss Sharon McMaster, who has been spending her vacation with her parents, Mr. and Mrs. Lester McMaster at their home in Elk, returned to Santa Rosa Tuesday, where she is attending Junior College.

• Eagles have been bothering the lambs on the C. W. Johnson range near Boonville. This ranch seems to be their favorite, as every year they appear to attack young lambs.

• Sacramento – Gov. Edmund G. Brown said Tuesday of this week, California’s “dynamic” economy would create 230,000 new jobs this year – the highest number in seven years and an increase of 23.7 per cent over 1965.

• A school of whales have been recently spouting off-shore at Littleriver. They roll and jump and go through all sorts of interesting antics. Along our coast is the migratory route for the California grey whale.

• Advertisement: “Coin telephones have changed quite a bit since they were first introduced some 75 years ago. Tomorrow’s phones will be streamlined and quiet, too, when you deposit your coin. Why these changes? Simply to make the phones look and work even better than before.”– D. P. Connole, Your Pacific Telephone Manager in Mendocino.

• Art Center Rapport: The final program for the summer session is being worked on at this time and the brochures should be print worthy in another three weeks. Monica Hannasch, Jack Sears, Sasha Makovkin, Winona Tomanoczy, Dorr Bothwell, Blessing LeMohn, Kent Bowman, Ed Shuster and Charles Stevenson will all be on tap for the summer as plans go.

• Erin Dertner has been painting her colorful watercolors of Mendocino cottages and gardens for 10 years. In addition to her original paintings, handled exclusively by the Ruth Carlson Gallery, a number of Dertner’s watercolors have been made into prints, note cards and postcards. More recently, Dertner’s paintings have been reproduced in an entirely different medium. Three of her watercolors have been made into stitchery kits for needlepoint and cross-stitch enthusiasts. Dertner, her husband, Tomas, and their two sons, Abraham, 11, and Levi, 9, moved to the Coast four years ago from Yuba City in the Sacramento Valley.

• Some 300 coast residents marched through the streets of Mendocino united in their call for peace in the Middle East on Saturday. The peace march through Mendocino was one of many marches and rallies that occurred in Mendocino County on Saturday to let President Bush know how some of the American population feels about a military confrontation in the Gulf.

FlexQube adds to its dealer network

Business this week | The world this week