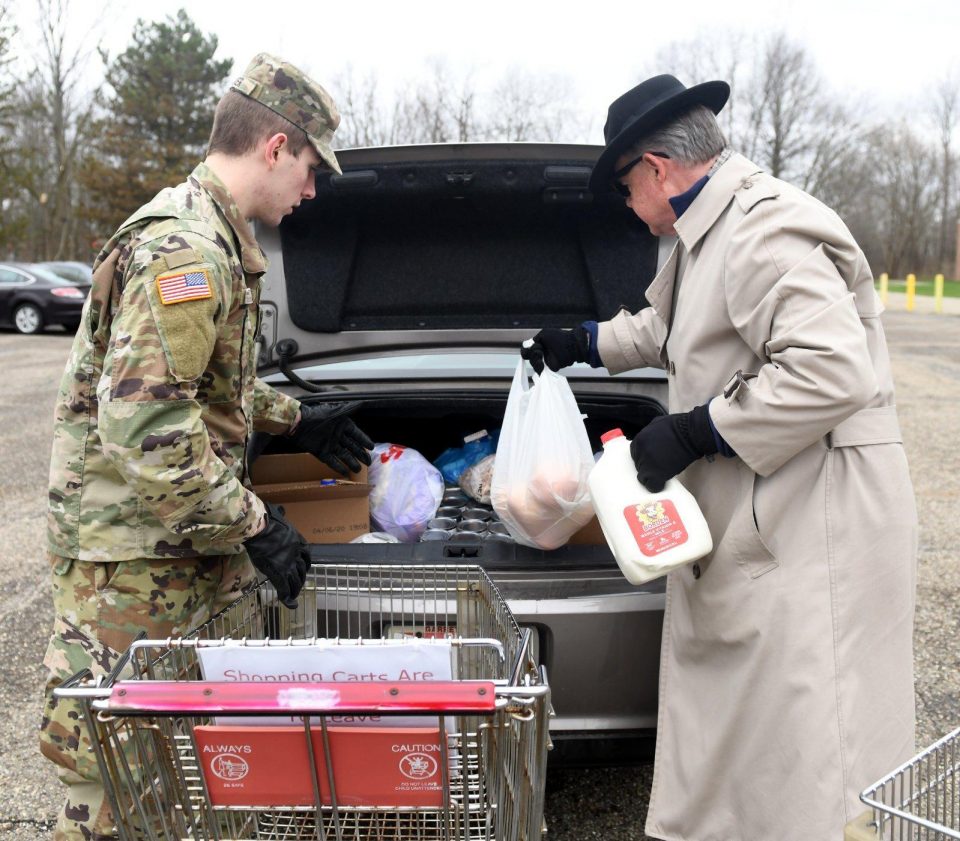 Prior to its official starting time of 11 a.m. on Tuesday, over 100 people already were served by a food distribution effort in the village of Windham.

Bill Childers, president and CEO of United Way of Portage County, said that by 9:45 a.m., around 60 cars were lined up in the parking lot of Windham’s Renaissance Family Center, 9005 Wilverne Drive, to receive goods from the Salvation Army’s monthly direct distribution.

The effort was meant to serve all in Portage County, not just residents of Windham. Along with community volunteers, members of the Akron-Canton Regional Foodbank, United Way of Portage County, the Salvation Army and the Ohio Army National Guard were on hand to help. Despite the influx of clients, Childers said the operation ran smoothly.

Direct distributions of goods at the center are typically performed the fourth Tuesday of each month. Clients drive into the parking lot of the center and wait to be assisted. Inside the facility, volunteers fill shopping carts with a variety of goods including canned food, frozen eggs, and peanut butter. Once the carts are filled, more volunteers take them outside and load goods into vehicles.

Members of the 1st Battalion 145th Armored Regiment, Ohio Army National Guard, were present to help. According to National Guard Specialist SPC Kristen Kennedy, the Stow-based unit has many members that are local to where the direct distribution was held. She said it was great to be able to serve a community that is physically close.

Kennedy said the guardsmen largely spent their time loading carts with donated groceries. The majority of the unit is assisting in operations at the Akron-Canton Regional Foodbank, however. Because of the situation regarding COVID-19, she said, the unit is filling the place of volunteers.

Gina Campbell, Akron-Canton Regional Foodbank director of development and resources, said every client that came through had been incredibly gracious and thankful. Tammy Clark, a client of the direct distribution, said that she and her family really appreciate the drive because they are currently homeless.

“This has been a real, big, big blessing for us to be able to get a little bit of extra help,” Clark said. “Hopefully, we’re going to be getting a place in the next day or two. With everything coming down hard … it’s been tough.”

Dan Flowers, Akron-Canton Regional Foodbank president and CEO, said the amount of food distributed from his facility has increased by 30% compared to this time last year. Sandi Fordyce, the case worker at the Salvation Army’s Northeast Portage Food Shelf, said her food order had increased by 25%.

Flowers said that all of the costs associated with the food used during direct distributions and the costs associated with transporting food are covered by the Foodbank. The organization continues to work with government agencies as well as with food and financial donors. However, replenishments of their significantly depleted inventory are six to eight weeks out in some situations.

Those interested in assisting the efforts of the Akron-Canton Regional Foodbank, at this time, are asked to make monetary contributions. Donations can be made on its website, www.akroncantonfoodbank.org, or sent by mail to its facility, located at 350 Opportunity Pkwy., Akron 44307.

“$1 can provide the equivalent of four meals,” Campbell said. “We cover eight counties. This is just Windham right now. We’re trying to get these mass quantities out to everybody.”

According to Fordyce, the Northeast Portage Food Shelf is preparing to launch a service that delivers food twice a month to those who will not or cannot leave their homes. The pantry assists residents of Windham, Garrettsville, Nelson Township, Freedom Township and Hiram Township as well as parts of Mantua Township and Newton Falls. Those interested in finding out if they qualify for that delivery service should contact Fordyce at 330-314-7674.

Reporter Kaitlyn McGarvey can be reached at [email protected] or on Twitter at @ktlynmcgrvy.