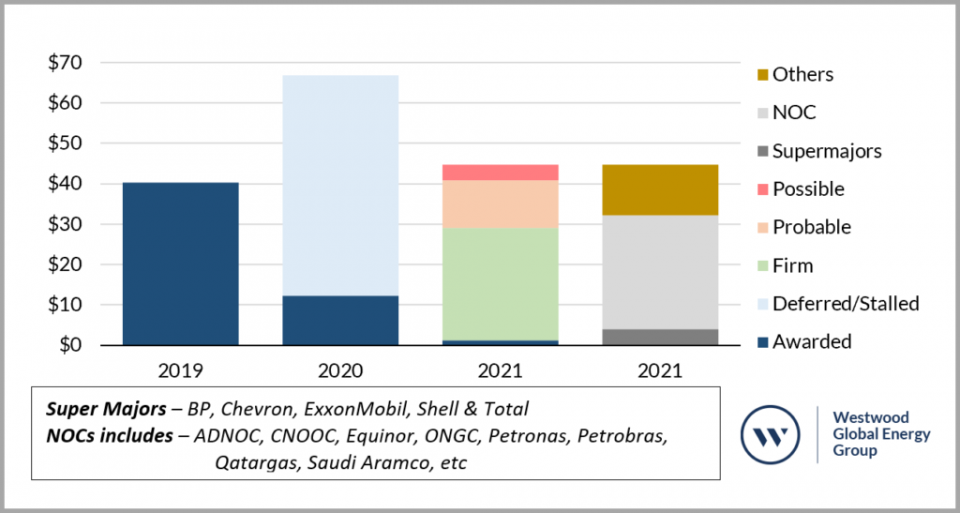 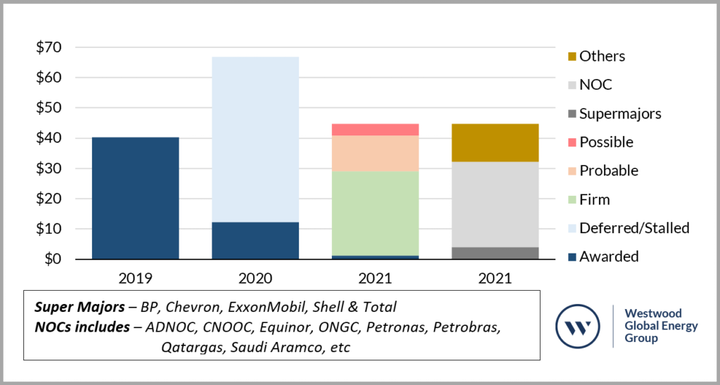 LONDON – Total investments in new offshore field developments last year were the lowest for over three decades, according to Westwood Global Energy Group.

In the event, $12.3 billion of EPC contracts were awarded for 32 sanctioned projects, down from $40.3 billion for 80 projects the previous year.

According to Thom Payne, head of Offshore Energy Services at Westwood, five E&P companies accounted for 75% of the award value in 23 projects. The five largest projects, contributing 57% of the overall value, were Woodside’s Sangomar off Senegal, ExxonMobil’s Payara off Guyana, Equinor’s Breidablikk in the North Sea, CNOOC’s Lufeng 14-1/4/8 offshore China, and Petrobras’ Mero III in Brazil’s Santos basin.

This year the spending plans of certain players such as Petrobras, Shell, and Woodside could lead to a resurgence in offshore EPC awards. Based on an average Brent price of $50/bbl, Westwood forecasts firm and already awarded contracts of around $29 billion, with a further $12 billion of probable and $4 billion of possible awards in prospect.

Some of these relate to projects deferred last year and which had pre-FID commitment, such as Shell’s Whale, Equinor’s Bacalhau and Qatar Petroleum’s North Field, all of which had started partial construction of long-lead items such as FPSOs or wellhead platforms.

These projects account for $7.7 billion of projected EPC value for 2021. Another $4.6 billion comes from awards concerning backfilling of LNG trains or supporting existing gas sales agreements such as Woodside’s Scarborough, Shell’s Crux and Santos’ Barossa, all offshore Australia.

Payne expected Petrobras to contribute around $6.5 billion of EPC awards in 2021 for its Búzios 5, 6, 7 and 8, Mero 4, Itapu and Marlim Revitalization projects.