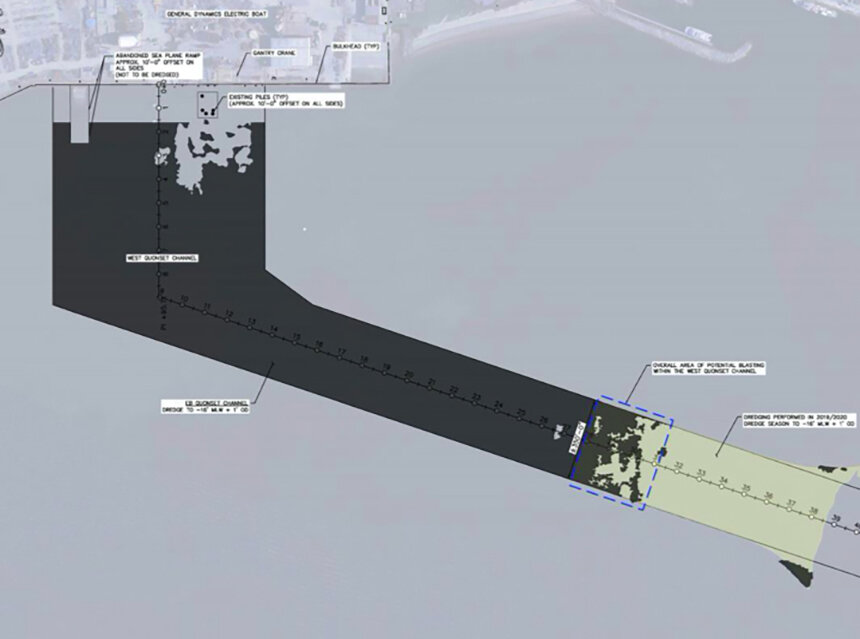 In a presentation to the Conservation Commission, Quonset said it will pay four biologists to monitor the site for marine mammals and to make sure the project complies with the federal Marine Mammal Protection Act.

Fishermen will also be notified of the blasting so that pots and traps can be removed.

Town Council member Mary Brimer said she appreciated the safety protocols for sea life, but she is worried that lobster and snail fishermen will suffer financially.

“This is a huge inconvenience on them and burden on them in the year of COVID already to disrupt their business,”  Brimer said. “What is in it for them? This is incredibly disruptive and unfair to their business. I’m uncomfortable with the blasting.”

She suggested compensating the fishermen for lost revenue. The council, however, didn’t consider the idea.

The Conservation Commission and the Harbor Management Commission offered five recommendations for Quonset, including compliance with the Marine Mammal Protection Act and to consider digging an alternative channel. If an alternate route isn’t selected, Quonset is asked to explain why the option wasn’t selected.

The Town Council included the recommendations in its approval of the blasting. The measure passed, 3-2, with Brimer and Welch opposed.

“Of course, we all acknowledge Quonset’s huge contribution to our local economy. But it troubled me that the project seemed to come to the town as a ‘fait accompli’ without reasonable dialogue,” Hutchinson wrote in an email to Sonder.

Hutchinson wanted to know why more time wasn’t granted to debate the issue considering that the barge and pier won’t be completed until mid-2021.

“Given the cost of dredging, doesn’t it seem fiscally logical to consider alternative routes?” Hutchinson asked.

The Coastal Resources Management Council (CRMC) approved the dredging in 2017. But approval for the blasting is still needed. No date has been set for a CRMC hearing, but it’s likely to be soon as Quonset expects to commence blasting later this month or in early November.

The cost of the full dredging project is between $5 million and $10 million, depending on the volume of material removed. Prior to the start of the dredging, it was estimated that  206,350 cubic yards of material would be removed. All dredged material will be dumped in designated sites in Rhode Island Sound.

ADNOC Logistics to Service All Petroleum Ports in Abu Dhabi

Here Is What Is Coming Next for E-Procurement

The Proper Approach to Discovery in Procurement Proceedings