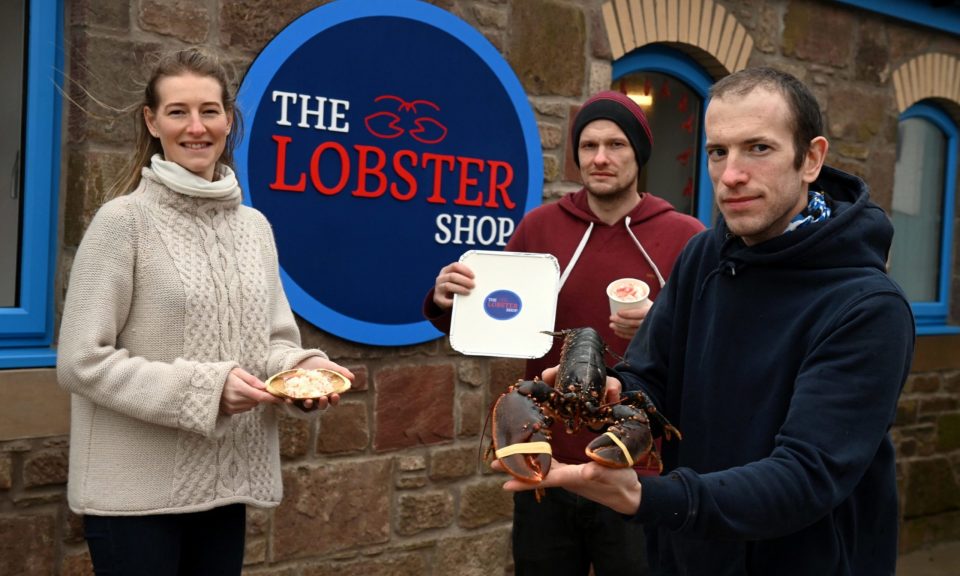 Specialising in locally landed produce, owners of The Lobster Shop hope to have the new venue open in the coming months.

The brainchild of Loren McBay and her two brothers, Ivan and Jason, the produce for the store will be provided by small, local fishing boats who fish by creels sustainably.

Located in Johnshaven on the east coast, the business is associated with shellfish wholesalers Murray McBay & Co, which is run by Loren’s parents Ivan Sr and Jackie McBay, and was originally launched by Loren’s grandfather around 70 years ago.

Wanting to do something more consumer facing with the business and the produce that Murray McBay & Co exports, Loren and her brothers came up with the idea of The Lobster Shop, a customer-focused store which will serve up freshly made dishes incorporating lobster, brown crab and other freshly caught seafood.

She said: “Murray McBay & Co is still the main business – we’re exporters of shellfish and around a year and a half ago we thought it would be good to have a cooking facility and a shop on site.

“We’ve always thought about doing something as when our customers come in they would say how exciting it is seeing the lobsters, but they wouldn’t know how to cook them as they were still alive. On the other side of things, some restaurants can hike the price of lobster up so people also don’t really get the chance to try it.

“Through North East Scotland Fisheries Local Group (NESFLAG) we managed to get some funding. We put in an application and went through that process and with the whole Brexit and export chaos, it has tied in really well with us being able to sell to customers direct.

“Our hands were tied on shipping our product out of the country so it has been great on that front to push us to get going. We want to be focusing on providing the local community with amazing seafood.”

Following seven decades on from her grandfather’s launch, Loren hopes this new addition to the Murray McBay & Co portfolio will see the business generate a new market, one much closer to home.

“We’re based on the sea at the harbour and it is based where Murray McBay is. It is an extension of the original building and there’s an office, a kitchen and a small shop there now,” said Loren.

“Murray McBay was my grandad’s firm (my dad’s dad) about 70 years ago and he had always been in amongst fishing from a young age. It was a big part of their upbringing. He went to London and did some work there, and then came back and wanted to do some exporting so did that via London and shipped overseas.”

Running The Lobster Shop with her two brothers, the siblings all play a part in the smooth running of the operation.

While the shop won’t be opening for at least another month or so, the two-month-old business has been trading since Hogmanay last year, making their first deliveries in time for the special occasion.

She said: “The shop isn’t open for people to come in yet as there’s been a few delays. Our first deliveries were on December 31 last year. It went so well and having only promoted the service two days before, we were really surprised. The whole family has been involved at some point.

“We have orders for collection or deliveries on Tuesdays and Fridays, and deliver to the Stonehaven, Montrose and Laurencekirk area for now, but we’re hoping to add an Aberdeen route as we’ve had so many enquiries.

“We have a window we operate collections from but we’re hoping to get things open in the next month or six weeks. We’ll see how things are.”

Specialising in fresh lobster, Loren said working in partnership with local fisherman who run small fishing boats is going to be vital to showcase the range of produce caught off the shores of the north-east coast.

She added: “We specialise in lobster but have brown crab, too. Lobster had the name behind it, and people maybe don’t think brown crab is as fancy, but the price is excellent and you can do so much with it.

“A few people have asked for oysters and mussels, but we’re trying to buy from the smaller 10 metre sized boats so that they can diversify what they land. Lobster used to be very seasonal as they don’t really move around in winter, so fisherman used to go and get herring and that sort of thing, so we’ll be focused around what they have. We’ve had langoustine Scot lobsters which nobody really uses – they are so good though! It is all creel caught and it is a good, sustainable way to be fishing.”

Creating new dishes for customers to experiment with and enjoy seafood, and also serving up the produce just as it is, Loren says come spring, there will be even more options to tickle the tastebuds, with a lobster roll also making an appearance on the menu.

“The lobster salad is by my gran, Ruth. She came up with the recipe and we’ve always loved it. There’s usually a local fish festival in Johnshaven and we’ve done lobster rolls in brioche buns for that before. The local bakery is going to make us some stuff so we can make something like it in summer.

“We offer crab meat in tubs and we serve a whole lobster with garlic butter, dressing it in its shell once we have got all the meat out of it. It just means the customers don’t have to worry about breaking up the claws and things like that. All you have to do is warm it up at home.

“I think a lot of people think seafood takes a long time to prepare so we’re making it as easy as we can for everyone.

“One of my mum’s friends has a small cupcake business so we’ve teamed up for Mother’s Day. It is so weird going from working in huge wholesale numbers to then working out how much a lobster with cupcakes would be. We’re seeing lots of demand for it and we’re pretty flexible so we’ll be servicing as many people as we can.

“We just can’t wait to be open and giving people a flavour of what we offer, but we are offering collection and delivery just now, and if anyone is really interested they can also message us on Facebook and we can see where the demand is to facilitate further delivery routes.”

For more on food and drink…