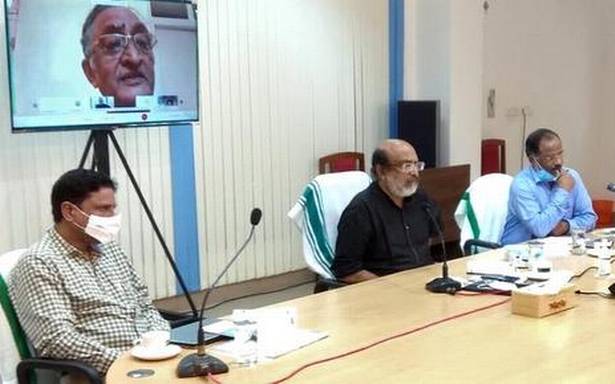 Non-BJP-ruled States and those ruled by the Opposition parties have called for a reordering of the GST distribution framework. They have also sought an extension of the term for eligibility for compensation, given the varied problems associated with GST implementation, which, they said, was work-in-progress at best.

Distribution of taxes under GST should be fixed at 60 per cent for the States and 40 per cent for the Centre (currently 50:50) and States should be allowed to tweak the rates by up to 2 per cent within their jurisdiction when IGST and SGST rates are the same across the country, they said.

No question of compromise

These were among the overwhelming consensus aired at a webinar hosted on Monday by two think-tanks, Thiruvananthapuram-based Gulati Institute of Finance and Taxation and Chandigarh-based Centre for Research in Rural and Industrial Development.

In his address, Kerala Finance Minister Thomas Isaac said there is no question of compromising the constitutional right of the State to claim its due share of GST compensation to the extent committed by the Centre through amendment of the relevant Act.

At the time of GST implementation in 2017, the Centre had committed to compensate States for any shortfall on account of GST at a 14 per cent increase per year over 2015-16 revenues. The amendment provides for five years of compensation, July 2017-2022.

The Constitution does not either distinguish between an Act of God, Nature or Man to trigger the flow of compensation funds, Isaac said. The State governments will not accept any formula to circumvent established provisions of law or countenance any sleight of hand by the Centre, he added.

Delhi Finance Minister Manish Sisodia could not attend the event since he is under quarantine following Covid-19 infection. A number of experts and writers on economy as well as leading journalists also attended the webinar.

According to Isaac, participants at the webinar agreed that State governments are not willing to settle for anything less than full GST compensation as enshrined in the Constitution. And this cannot be set off against any routine loan/grant or any special window for any such in future.

“If the Centre is willing to give us an early commitment on these two aspects, maybe we can sit across table and discuss the rest,” he said in a Facebook post. “In what timeframe will the money be made available? What will be the share of borrowing, if any, between the States and the Centre?”

The Centre has estimated a ₹2.35-lakh-crore shortfall in compensation cess revenue from Covid-19. But only ₹97,000 crore of this is on account of GST implementation while the rest is due to an ‘Act of God’ (Covid-19), Finance Minister Nirmala Sitharaman had said.

The Centre argues that if it borrows to cover the shortfall, yields will be impacted and there will be other macroeconomic repercussions and hence it is in collective interest that States do the borrowing.

It thus presented two options to the States. Under option 1, if the States choose to borrow ₹97,000 crore, they will get a host of benefits including access to a special RBI borrowing window and no debt servicing liability. Other incentives will also apply.

Under option 2, if the States decide to borrow the entire amount of the estimated shortfall in compensation cess (₹2.35-lakh crore) it will have to be from the market and they’ll have to service the interest on such debt from their own resources. Other restrictions apply.

These are preposterous conditions, Isaac said. There is no way the States can buckle and blindly sign along the lines dictated by the Centre. At best, they are merely suggestions from it and do not amount to decisions agreed on by the GST Council, the apex decision-maker, he added.

According to him, the unilateral decisions till now by the Centre have created a massive trust deficit vis-à-vis States. If there is no consensus on these issues (other than the two options on which there is no compromise), the dispute resolution framework should be put to work, he said.