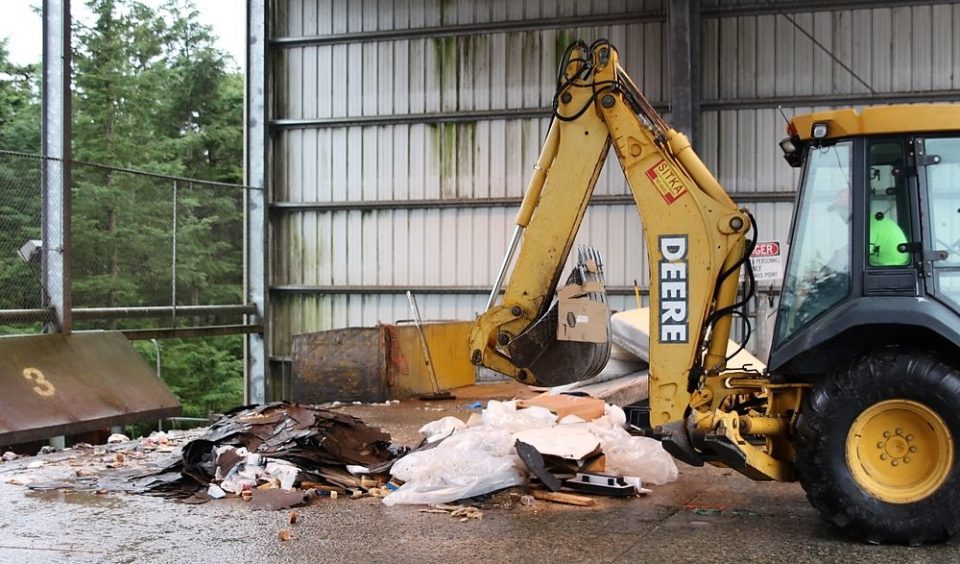 On Tuesday (11-17-20) Alaska Marine Lines announced that it will increase freight rates by five percent in 2021. But that’s not the only shipping cost that may get a bump: The cost to ship Sitka’s solid waste off the island could go up, over concerns about container fires on Southeast Alaska barges.

The joke has been made repeatedly by late night hosts, it has trended on Twitter– the year 2020 has been called a “dumpster fire” by many. “Friends” star Jennifer Aniston even extinguished a flaming wastebasket out of its hot misery, live, on the Emmys stage.

Now some Southeast communities can add ‘trash fires’ to their list of actual grievances this year.

“There have been some fires in these containers in Southeast recently, and that’s created a lot of concerns with AML who’s running those shipments. Obviously any fire at sea is a very serious deal, or any fire in port is extremely serious deal– there’s a lot of lives that could be at risk,” he said. “They want to do whatever they can to reduce that fire risk.”

Dan Kelly is the Vice President of Freight Operations at AML. He said the most recent fire was in September at their Ketchikan facility.

“There was a container that had been in our yard getting ready to go on a mainline barge, southbound that a good Samaritan had noticed in the early hours of the morning, that there were some flames coming out of, so they reported that and the fire department responded to that,” he said.

The incident could have been catastrophic. AML had been working out a plan with Republic Services, the nationwide subcontractor that delivers the loaded trash containers to the AML barges, and then hauls them to a landfill in Eastern Washington.

The plan was to eventually ship all of Southeast’s waste in closed, compacted shipping containers. But the incident in September lit a fire under them, prompting them to speed up the process.

“We felt it was important to establish some deadlines to spur the conversation,” Kelly said. “We don’t want to rely on luck moving forward and do whatever we can to ensure that this is as safe a process as it could be.”

He said as of the beginning of November, three communities were still moving loose garbage in open top containers: Sitka, Wrangell, and Klawock. They’re now asking that those communities switch to hardtop, enclosed containers, and begin compacting their garbage by next summer.

Even though Sitka has been using the open-top containers, city administrator Leach said in recent years the city’s solid waste department has avoided container fires like the one in Ketchikan. The last time a Sitka container caught fire was in 2016.

Leach said that’s because Sitka has enforced a stricter safety program. They’ve managed to catch fires early at the transfer station, and eliminate some risk by finding and removing highly flammable items from the waste stream, like expired marine flares.

“With enough pressure, those things can go off in the garbage and that can start a pretty big fire. So we’ve started collecting those marine flares, and at least we’re doing our best to remove that. Lithium Ion batteries is another one- those can get punctured and get wet, and become very volatile. explode, that’s why they’re not allowed on planes.”

Leach and Kelly said that Republic Services will likely provide the hard top containers. But AML also wants the garbage compacted, and that could cost the city.

But if we’re going to have to compact the municipal solid waste, then we need some very expensive compacting or bailing equipment,” said Leach, estimating the additional infrastructure could cost anywhere between $1.5 to $2 million.

He said he’s hoping to reach an affordable solution with AML and Republic Services.

“We’re compacting as much as possible with our current system,” he said. “So we just need to find out what’s going to work, what’s going to make everybody comfortable and keep our solid waste shipped out of here appropriately.”

AML has set a deadline with Republic Services. By June 1, 2021, Sitka, Wrangell, and Klawock must ship their garbage out in compacted and closed containers.

Ships on the Mersey and high and low tides on Saturday, July 18

Azerbaijan becomes a full-fledged participant of the BRI