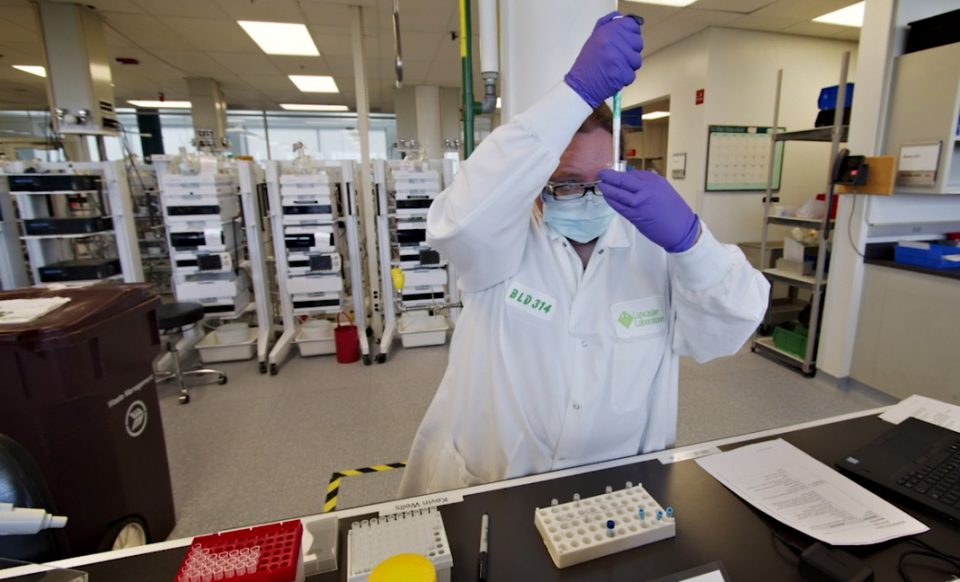 New antibody drugs are available around the state that, if given early, can dramatically reduce the chance of at-risk COVID-19 patients getting so sick they end up in the hospital.

Eli Lilly and Co. employees prepare doses of the monoclonal antibody drug Bamlanivimab to help treat patients who are at high risk of progressing to severe COVID-19 disease and/or of being hospitalized. (Courtesy of Eli Lilly)

But there haven’t been a lot of takers in New Mexico – despite a near-record of 43 daily deaths one day last week related to COVID-19. Now the push is on to educate patients and medical providers about the availability and effectiveness of the two IV-administered antibody therapies.

The experimental treatments approved for emergency use by the U.S. Federal Drug Administration are limited under federal rules to patients recently diagnosed with COVID-19 who have symptoms and at least one risk factor, such as being 65 or older or having an underlying health condition. To be effective, the antibody infusions must be given within 10 days of the onset of symptoms.

“Data shows the antibody treatments can reduce your chances of going to the ER or the hospital combined by 75 percent,” said Dr. David Scrase, secretary of the state Human Services Department and Gov. Michelle Lujan Grisham’s top medical adviser on COVID-19 issues.

Scrase said more than half of New Mexicans have a risk factor, such as heart or lung disease or diabetes, that could make them eligible for the treatment. And he said about 80 percent of those who test positive in New Mexico have symptoms.

But during the first month of availability, fewer than 1,000 people have taken advantage of either antibody therapy despite more than 1,000 new COVID-19 cases being reported nearly every day.

Some 908 doses of Eli Lilly and Co.’s antibody drug had been administered as of Monday, along with 66 doses of a similar antibody drug manufactured by Regeneron Pharmaceuticals Inc., state Department of Health data shows.

New Mexico has used about 28 percent of the supply received by New Mexico from the federal government, but that’s still higher than the 20 percent usage reported nationwide.

The infusion therapy is aimed at mild-to-moderate COVID-19 patients and requires a doctor’s order.

Scrase said the rollout of the antibody treatments coincided with a surge of COVID-19 cases and the push to vaccinate New Mexico’s front-line health care workers for COVID-19.

Eli Lilly’s antibody drug Bamlanivimab has FDA approval for emergency use on those with COVID-19 symptoms who are over 65 or have at least one risk factor. (Courtesy of Eli Lilly)

“I think the bottom line for this is our delivery systems have been completely swamped,” Scrase said. But he predicted an uptick in the use of the antibody drugs once the first phase of vaccinations is completed.

Since early December, Presbyterian Healthcare Services has set up infusion sites in Albuquerque, Española, Clovis, Ruidoso and Socorro, and planned to open locations last week in Santa Fe and Tucumcari.

Last week, Lovelace Health Systems reported that 17 patients had received the therapy. University of New Mexico Hospital wouldn’t say how many patients have been treated with the drugs.

He cited the help of the Indian Health Service and Pueblo communities surrounding Santa Fe.

“We had six referrals from a single pueblo, and we’re glad to be accepting these patients,” Gonzales said Thursday. Native American communities in New Mexico have been hit especially hard by the virus.

Around the country, other physicians say patients and their doctors are leery of the new treatments, or hospital systems are too overwhelmed to handle the logistics of opening infusion sites, where COVID-19 patients spend from two to six hours receiving the one-dose treatment and being monitored for any adverse reactions.

According to The Washington Post, Health and Human Services Secretary Alex Azar said in a Dec. 15 television appearance that there was a surprising surplus of the medications nationwide, partly because “people are waiting too long to seek out the treatments.”

Such delays, Azar warned, meant that for some patients, “it may be too late in order to get the benefit of these antibody treatments that beat back the spread of the virus.”

Even with the relatively small number of doses administered in New Mexico, the reviews are positive.

“The data that is out there has very strongly suggested that these medicines are effective in decreasing the viral load of these patients, decreasing the severity of symptoms and decreasing the need for hospitalizations,” said Dr. Arand Pierce, medical director of Presbyterian’s transfusion services.

“We do think this is making a difference,” particularly for the subset of eligible patients who are 65 and older, or who are considered obese, said Dr. Theresa Ronan, medical director of quality at Christus St. Vincent Regional Medical Center.

Pierce said he hasn’t heard of instances of the medications causing significant adverse reactions at Presbyterian facilities and said they are “very safe.”

“I personally would not hesitate to recommend this to one of my own loved ones,” he said.

Pierce said he also hasn’t heard of patients or their providers being reluctant to take the infusion.

“I haven’t really gotten anything except an onslaught of phone calls and emails from fellow clinical colleagues as well as friends and family members and other people wanting to know how they can get their patients in for treatment. It’s really been nothing but interest.”

Pierce said the primary challenge is getting the word out to providers in New Mexico that the treatments are available for their eligible patients.

To that end, Presbyterian has sent out emails and bulletins, and has created a team of clinicians who are reviewing charts of recently diagnosed COVID-19 patients to see if they are candidates for the infusions. The team then contacts those patients’ providers and helps with the necessary referrals.

“We have very proactive mechanisms in place … to actually find these patients and at the same time help educate and make those providers aware that there are these options,” Pierce said.

Scrase told the Journal he learned last week that of 62 people recently offered the infusion by Presbyterian, 60 accepted. “Other systems with lower numbers of outreach are seeing it like 50-50, so we’re working on messaging for that,” Scrase said.

Another challenge, Pierce said, is “having referring providers understand who is eligible.”

“It’s not just every COVID-19 patient,” he said. “There’s pre-defined criteria to kind of target patients who have other types of health issues that are going to predispose them to be more severely affected by COVID or be more likely to require hospitalizations.”

More on the way

On the horizon is Eli Lilly’s plan to supply an additional 10,000 doses to New Mexico as part of a continuing study of its Bamlanivimab antibody drug. UNM is teaming up with Presbyterian to help in that project.

Could the day come when demand for the antibody therapies outstrips supply?

Pierce said Presbyterian has planned for that contingency.

Traveling nurses have been brought into the state specifically to help administer the infusions, and protocols have been established to determine what patients would get priority for the infusions if there’s not enough to go around, Pierce said.

“We feel pretty comfortable with where we’re going and with our plan to kind of press on and get this medicine to as many people as possible,” he said.

Statehouse Beat: Elections in the time of a pandemic | Phil Kabler

Hoping For The Best Through Harrowing Times