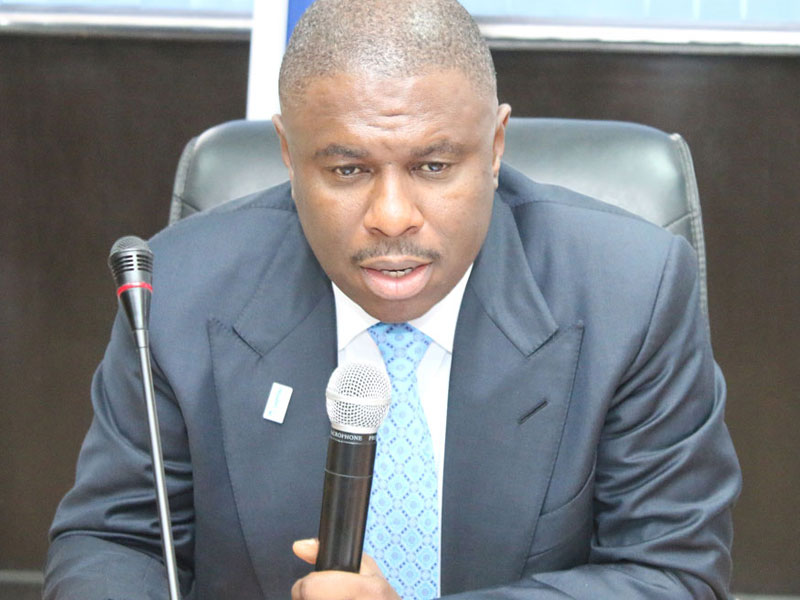 After a year of giant strides, NIMASA moves into a promising decade of new achievements, writes Vincent Obia

For institutions and individuals to position themselves for enduring service to humanity, and to justify the confidence society reposes in them, there must be a critical meeting point between the past, the present and tomorrow. When they objectively play back the past, they are not afraid to learn lessons from where they erred. That equips them with new skills to scale more challenging heights. And when they critically assess their current performance, it assists them to capture the picture of their future, no matter how hazy it looks. The totality of these factors enables human beings and their institutions to formulate a hopeful vision of tomorrow.

In the past couple of years of the operations of Nigerian Maritime Administration and Safety Agency (NIMASA), especially the past 12 months, all these conditions have been at work to conclude that even though there is verifiable evidence to suggest that much water has passed under the bridge, still much lies ahead in the New Year to be accomplished.

Interestingly, 2020 also marks the beginning of a new decade. It can safely be said that if NIMASA did well in the outgone year, these feats would represent the foundation for greater exploits in years to come.

That was the point NIMASA, Director-General, Dr. Dakuku Peterside, was making when he met the World Press at a news conference on January 10 in Lagos to cast a glance at NIMASA in 2019.

Reviewing the agency’s activities, notably in 2019, Dakuku spoke of NIMASA as having provided “a major economic stimulus for the country “, especially in the last one year. According to him, NIMASA symbolises change, and, “No organisation in the country currently typifies change more than NIMASA.” He believes, like other keen observers, this characteristic stood out NIMASA in the past 12 months and would launch the agency into the next decade, beginning with 2020.

One key intervention of NIMASA in the past year was its tough stance on joining hands with the federal government to diversify the economy of the country through the oceans. On July 25, 2019, the continent marked African Day of Seas and Oceans, and for NIMASA, it was an opportunity to showcase the potential of the seas as a veritable takeoff point to begin to diversify the economy. The agency rallied experts and stakeholders to discuss the limitless endowments of marine life. NIMASA brought to the fore the need for clean oceans, which would lead to increase in economic activities, such as fishing and water transportation, to free the roads from congestion and unbearable pressure on infrastructure, and other benefits.

NIMASA also put Nigeria on the world map during the year when it was rated the first in Flag State Administration and Port State Control in West and Central Africa. What earned the agency this unique honour was its diligence in inspecting ships calling at Nigerian ports in compliance with international conventions. The upshot: the number of substandard vessels berthing in Nigeria declined drastically.

The increased inspection and survey improved safety on Nigerian waters, as it helped to reduce cases of vessels with deficiency by more than 14 per cent.

The year witnessed accelerated fulfillment of the pillars of the reform strategy unveiled by Dakuku when he took over office at NIMASA in 2016. These include: Survey, Inspection and Certification Transformation Programme; Environment, Security and Search and Rescue Transformation Programme; Capacity Building Promotional Initiatives, which entail growing indigenous tonnage, shipbuilding, and human capacity; Digital Transformation Strategy; and Structural and Cultural reforms, including changes to work ethic and attitude of staff as well as processes and procedures.

NIMASA in the year under focus also became the Poster Regulator of the government of President Muhammadu Buhari. Observers have noticed that the agency now reflects the change image of the government in several respects. One such point is that it has a well-regarded image in the eyes of the public. Its financial prudence has enabled it to contribute more to the federal purse. NIMASA, during the year, brought Nigeria more continental and international awareness through heading various global bodies. The agency also launched a coordinated effort to end Cabotage waivers. This comes under the launch of a five-year Cabotage waiver cessation plan beginning from 2021. One major advantage of this is that there has been a rise in the number of wholly-owned Nigerian vessels on the Nigerian Cabotage register. An analysis reveals that since NIMASA’s initiative, there has been a 33 per cent increase.

The impact on the Nigerian economy and its people is comprehensive. First, it brings more employment to the teeming youths.  It also allows more revenue for the government to enable it meet its fiscal responsibilities. Next, it aligns Nigeria to global best practices in the maritime space. One more benefit in addition to several others: NIMASA’s interventions justify the confidence the people and government have in the agency’s leadership. The desire of all public institutions is to serve their publics and earn a name that speaks of integrity and accountability.

One of the other laudable gains of NIMASA in the past year was the initiative to take the lead in promoting Sustainable Ocean Governance. This entailed promoting the Antipiracy Law as a way of improving security on the country’s territorial waters and exclusive economic zone. Nigeria became the first country in West/Central Africa to have a distinct antipiracy law. The Suppression of Piracy and other Maritime Offences Act 2019, enacted on June 24, 2019 after an assent by the President, provides a legal framework for the prosecution of piracy and other maritime crimes through the country’s maritime security enforcement agencies, namely, the Nigerian Navy and NIMASA. The law fulfils a critical international requirement for standalone legislation on piracy, as against the approach of using the Maritime Operations Coordinating Board Amendment Bill to criminalise piracy and prosecute suspects.

The drafting of the Suppression of Piracy and other Maritime Offences Bill in 2012 had been facilitated by NIMASA, in collaboration with the International Maritime Organisation (IMO).

More than any other country, Nigeria has leveraged on NIMASA’s foresight to battle high seas criminality.

The agency has also constantly been conscious of its role as a global player. On this score, 2019 saw NIMASA working in partnership with such world bodies as the United Nations Environment Programme (UNEP) and Global Partnership Action (GPA) to develop a national action plan on marine litter.

In line with the goals of cleaner seas and oceans, NIMASA has, through its Marine Environment Management (MEM) Department, implemented a number of hazardous wastes and chemical tracking initiatives in the country.

It successfully carried out hazardous wastes and dangerous chemical tracking programmes, under the International Maritime Dangerous Goods (IMDG) Code, at all the Agency’s operational zones, and developed the IMDG portal and installed exactEarth and Hazcheck Systems software for tracking of dangerous goods in Nigeria.  This was in fulfillment of Chapter Seven of the International Convention for the Safety of Life at Sea (SOLAS) Convention and Annexes 2 and 3 of the International Convention for the Prevention of Pollution from Ships (MARPOL) Convention. The identified gaps in the management of chemicals and hazardous wastes management in the maritime domain were addressed.  The agency is currently remodeling its Marine Pollution Laboratory to international standard to take care of the laboratory analysis aspects of the relevant IMO Marine Environment Conventions, such as the Oil Pollution Preparedness and Response Cooperation (IOPC), Ballast Water Convention, and Anti-Fouling Systems (AFS), when completed.

The association with the global community has shaped the outlook and vision of NIMASA to come up with commendable economic drivers that include Final Billing System for Freight Charges, Improved Maritime Safety, Security and Domain Awareness, and Tripartite Agreement by Maritime Stakeholders.

Of these far-reaching changes, Dakuku says, “With the Final Billing System, we have put an end to double billing. The system ensures closure of all vessel billing transactions within two weeks after departure…

“This has led to improved customer satisfaction.”

The Final Billing System for Freight Charges has significantly reduced turnaround time for reconciliation of bills with respect to the three per cent freight charge on vessels coming into the country. Before the new system, it took between five and 10 years to conclude the process, but with the Final Billing regime, all vessel billing transactions are concluded within two weeks of the ship’s departure.

The Director-General is not the only one who has observed these achievements. Secretary-General of IMO, Kitack Lim, says Nigeria boasts the most improved maritime administration since his tenure.

This is partly because of NIMASA’s excellent labour relations that include being a leader in championing gender balance in the society. At the moment, the agency has one of the country’s highest quota of women in directorship positions. The agency, according to Dakuku, is looking forward to “more females to participate in the already male-dominated sector, as they have a lot to offer.”

Perhaps, NIMASA’s greatest achievement in the area of maritime labour last year was the tripartite agreement signed by stakeholders, which the agency facilitated.

The agency facilitated negotiations to ensure that the collective bargaining agreement (CBA) was concluded and endorsed by the Tripartite Parties under the National Joint Industrial Council for Seafarers and Dockworkers (NJIC).   NIMASA, in conjunction with the tripartite stakeholders (employers and employees), successfully completed the International Labour Organisation (ILO) reports on Maritime Labour Conventions (MLC) 2006 and Dockwork Convention 1973.

This collective bargaining approach and model of reports have been commended by ILO and recommended for use by other member states of the ILO.

The development of maritime labour is critical to effective and efficient cargo handling onboard ships, seaports, terminal and also the maintenance of industrial peace and harmony in the Industry.

In line with the emphasis on maritime labour employment and capacity building for seafarers, the country witnessed 3,179 increase in the number of seafarers employed, from 4, 235 in 2018 to 7, 414 in 2019. The increased employment is attributed to the suspension of manning waiver by ensuring shipping companies submit a mandatory replacement and training. This is consistent with the five-year Cabotage waiver cessation plan.

NIMASA has also been alive to its status as a corporate citizen. Following the displacement of tens of thousands of Nigerians by natural disasters in some parts of the country, the agency dispatched top management officials to the affected communities to present relief materials worth millions of naira to the grieving citizens. The affected compatriots received food, cooking utensils, cash donations, drugs, beddings, clothes, and economic empowerment materials to enable them start life again.

Given these giant strides within the agency, matched by a positive interface with the outside world, NIMASA has established a template to enable it outdo its feats in the past. Not resting on its oars, the agency looks to a New Year of more achievements and a decade of more national and global recognition that would in turn bring honour to Nigeria and its people.