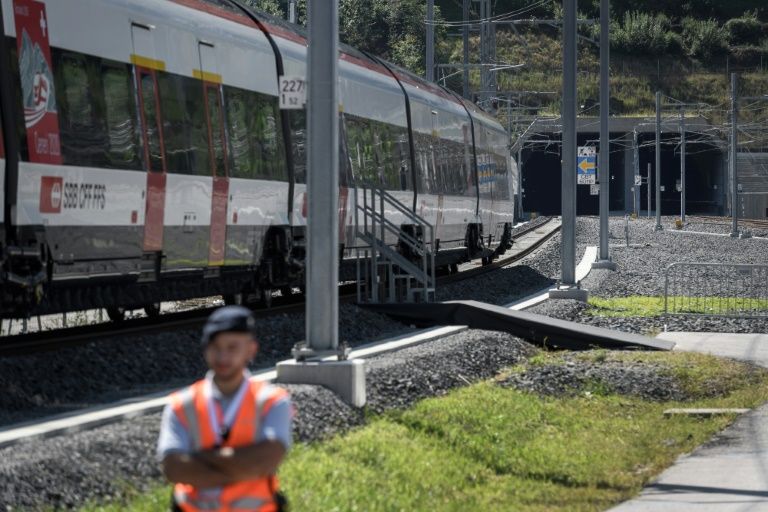 Switzerland opened its Ceneri tunnel on Friday — completing a mammoth project cutting a new route through the Alps which should transform rail links between northern and southern Europe.

After opening the Lotschberg Base Tunnel in 2007 and the Gotthard Base Tunnel in 2016, the Ceneri in Switzerland’s southern Ticino region is the final stage of the New Railway Link through the Alps project.

The route should ease the flow of goods along a railway freight corridor running from the North Sea at Rotterdam, Europe’s largest seaport, to Genoa, Italy’s biggest port, on the Mediterranean.

It is hoped the link will slash the number of trucks rumbling through the Alps by offering an alternative rail route.

For example, travel times between Zurich and Milan — already significantly shortened by the Gotthard tunnel — will be cut by 40 minutes to just three hours.

Transporting freight in Switzerland has long required powerful locomotives to navigate the mountain passes — and also heavy operations to load containers onto trains at the border before crossing the landlocked country.

“This is the final link that gives us a flat line straight through the Alps,” Swiss Federal Railways chief executive Vincent Ducrot told AFP at the tunnel’s media launch on Thursday.

“In the future, we will be able to have freight trains 750 metres long that can carry up to 2,100 tonnes of goods” per convoy, he said, highlighting the environmental benefits.

By taking the equivalent of 3,000 trucks off the roads and transporting those containers on the new rail route, it should be possible to reduce carbon dioxide emissions by 900 tonnes per day, he said.

The tunnel, at 329 metres above sea level, should see 170 freight and 180 passenger trains passing through per day.

Swiss President Simonetta Sommaruga officially opened the tunnel in a ceremony marked by alphorns and musicians from German-speaking parts of Switzerland and Italian-speaking Ticino, symbolising the new link between the north and south of the mountainous country.

Sommaruga cut the ribbon at the northern end as the first freight train passed through, heading south.

“This new train line through the Alps is the project of the century for our country,” the president told AFP.

“It is the biggest investment we have ever made,”, she said, calling it “a strong sign of an intelligent transport policy.”

The NRLA plan was initially approved by a referendum in 1992. The three-tunnel project cost 24 billion Swiss francs ($26.4 billion, 22.7 billion euros) and was partly financed by licence fees on heavy goods vehicles.

The Ceneri tunnel cost 3.6 billion francs — far behind the 12.2 billion invested in the Gotthard tunnel, which is the world’s longest at 57 kilometres.

US orders vessel crew restrictions in wake of coronavirus

HSE criticised for being unable to confirm compliance with procurement rules