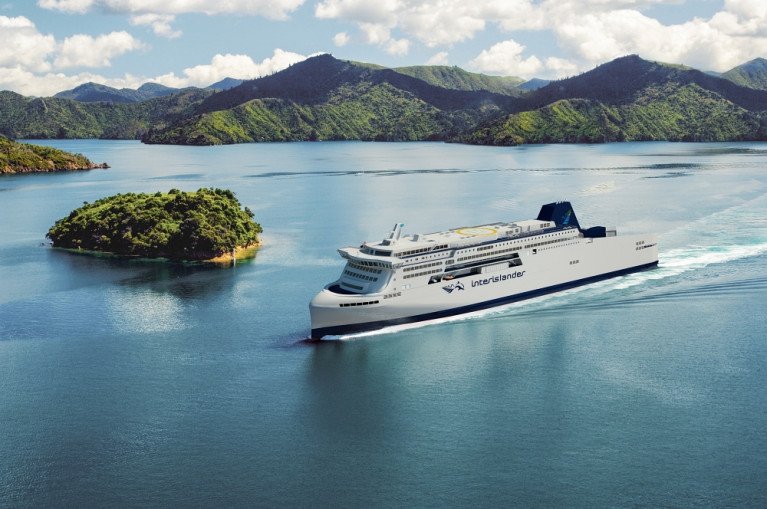 A pair of rail-enabled RoPax ferries for a New Zealand operator have chosen the Isle of Man Ship Registry as the flag state to oversee construction of the newbuilds that will connect the south Pacific Ocean nation’s north and south islands.

State-owned transport operator KiwiRail has commissioned the future-proofed vessels to modernise its fleet of ferries serving the Cook Strait.

KiwiRail’s Interislander service connects New Zealand’s State Highway and national rail networks between the capital city Wellington in the North Island and Picton in the South Island. The Interislander carries approximately 850,000 passengers, 250,000 cars and up to NZ$14 billion worth of freight annually.

The search to find a preferred shipyard began last year when KiwiRail issued an Expression of Interest to international shipyards. The selection of a successful shipyard is due to be completed in the next few months. KiwiRail has now appointed the Isle of Man Ship Registry, one of the world’s leading registers of ships and super yachts, as the newbuilding Flag. The Isle of Man Ship Registry will appoint and work in partnership with KiwiRail’s chosen classification society, overseeing the build process once a shipyard has been confirmed.

Chris Martin, a Senior Surveyor at the Isle of Man Ship Registry, said: “These will be specialist vessels with a demanding specification sheet, so it is an exciting project to be involved with. The Registry has a lot of experience with new-build commercial vessels and we will be liaising with both KiwiRail, the shipyard and the classification society, monitoring the build and making sure everyone is aware of their responsibilities from the outset.”

The two 220m RoPax ferries, which are being designed by Denmark’s OSK-ShipTech, will each be capable of carrying about 1,900 passengers. They will also have a capacity of approximately 3,600 lane metres, allowing them to transport a combination of vehicles including up to 40 sixty-foot rail wagons.

The new ferries will trigger significant changes to the Wellington and Waitohi Picton waterfronts, including new ferry berths, terminals and both rail and road connections to ensure the benefits of the new ferries are fully realised. The ships are targeted to enter service in the mid-2020s, replacing the existing three-vessel Interislander fleet.

Mr Martin said: “As these two sister vessels will be carrying passengers, cars, freight and rolling stock, they will be quite flexible in their capabilities. They will need to be able to turn-around in 60 minutes at peak times, so will have a dual-capability linkspan to allow rail freight and vehicles to load and unload at the same time.

“The ferries will also have to comply with quite stringent wave energy rules required for speeds in excess of 15 knots in the Marlborough Sounds, at the northern end of the South Island. This will require a very efficient hull form that must also have excellent seakeeping properties to deal with the often-challenging sea conditions experienced in this area of the world.”

The vessels will be diesel electric hybrid power, with diesel generators and batteries providing electrical power for azimuth thruster propulsion. KiwiRail is focussed on maximising efficiency and incorporating environmental features to minimise CO2 emissions. This includes making the ferries adaptable to new fuel sources as they become available.

KiwiRail’s Interislander General Manager Walter Rushbrook says: “It is over 20 years since New Zealand introduced a brand-new purpose-built ferry to its fleet, and we expect the new ferries will provide another 30 years’ service. Future-proofing the vessels so they can become even more efficient in future is important to us, as our goal is to reduce KiwiRail’s carbon emissions by 30% by 2030 and become carbon neutral by 2050. We estimate that from day-one the new ferries will reduce the Interislander’s emissions by 40 per cent.”

The Isle of Man Ship Registry believes flag states have a key role to play in promoting a green agenda and supporting a global reduction in ship emissions. It supports the International Maritime Organisation’s 2050 target to cut greenhouse gas emissions, and in 2014 launched a Green Fee scheme that offers financial incentives to ship owners who adopt energy efficient ship designs that reduce fuel consumption and air pollution.

Pakistan spends over $3017m on import of transport services