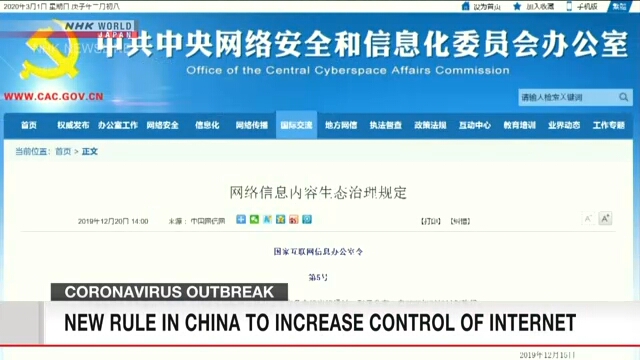 China has put into effect new rules to expand the scope of its control of the internet to the transmission of information that disrupts economic and social order.

China’s internet control authorities launched the new rules on Sunday with the aim “to create a healthy and refreshing internet space.”

The new regulation stipulates that in addition to information that poses threats to China’s national security, the government’s oversight now covers online information and rumors that disrupt economic and social order.

It says posted information that violates the rules will be deleted and reported to judicial authorities.

The regulation also says information providers should refrain from making inappropriate remarks on natural disasters and serious accidents. It says they also should not use exaggerated headlines.

Many remarks critical of the government’s handling of the coronavirus outbreaks have been posted online in recent weeks in China.

There is concern that Chinese authorities could further increase its control of the internet by adopting a broader interpretation of the rules.

Trading Jose Quintana is the move to make