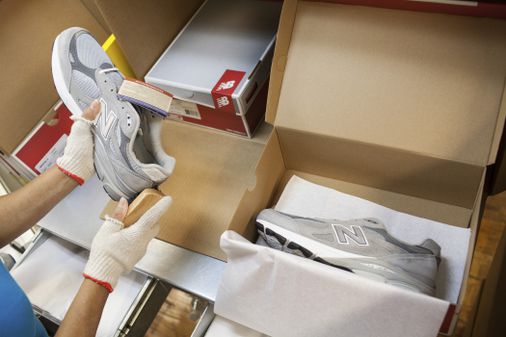 Running-shoe company New Balance plans to close its Boston factory in February, trimming 63 jobs in the city, even as it makes plans for more manufacturing jobs elsewhere in New England.

Chief executive Joe Preston said he went to the Brighton plant, at the end of Newton Street above the Mass. Pike, to break the news to factory workers on Friday morning. The company, whose headquarters offices are less than two miles away from the plant, is also cutting fewer than 50 non-manufacturing jobs in the US. Taken together, these job cuts represent 110 or so employees out of a global workforce of 7,700, including about 3,500 in this country.

However, New Balance expects to add as many as 150 jobs across its remaining locations in New England within the next year, most notably at a new factory in Methuen that is on track to open in mid-2021. The displaced Brighton workers are encouraged to apply to these new positions. Preston said shifting work to Methuen from Boston puts it closer to its manufacturing plant in Lawrence, where the company also does research and development. In total, New Balance employs about 900 manufacturing workers today among the Lawrence and Brighton plants and its three factories in Maine.

New Balance remains unusual in the industry because of its emphasis on US manufacturing, although the majority of its shoes continue to be made in Asia.

“At the core of it, the commitment of the company to domestic manufacturing is as strong as ever,” Preston said. “That may not seem like it today, but that’s an absolute fact.”

The new Methuen factory — about 80,000 square feet, a similar size to the one in Brighton — has been in the works for a while. In 2019, the company was awarded $900,000 in state tax credits, to be spread out over three years, and $272,000 in local property tax breaks to help subsidize what was then billed as a $33 million project.

New Balance, owned by Jim and Anne Davis, has generated about $4 billion in revenue in each of the past three years. Preston said he expects revenue to decline this year, in large part because of widespread retail closures in the spring due to the COVID-19 pandemic and a second wave of closures that took effect in Europe this fall. The company’s digital sales have surged amid the pandemic, from 30 percent of New Balance’s business a year ago to about 50 percent today, and New Balance is racing to adapt. Changes include major upgrades to the company’s websites across its global markets, and a new ship-from-store function to improve the availability of various models and sizes of shoes beyond what’s in the warehouses.

In addition to online channels, New Balance sells its shoes through its own branded stores — 3,500 worldwide, mostly owned and operated by franchisees — as well as third-party retailers such as sporting goods chains and independent shoe stores.

“Consumers … will go back to stores, there’s no doubt about that,” Preston said. “But the convenience of buying online is something that’s here to stay.”