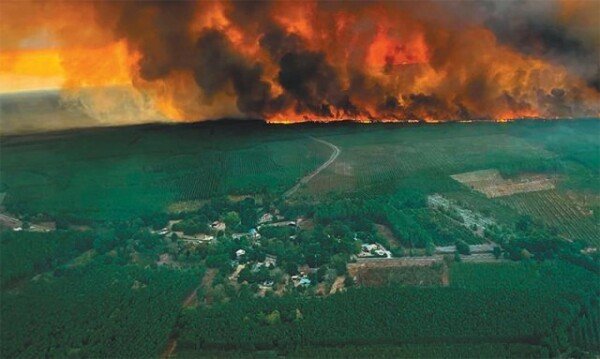 With Korea suffering from torrential rain, European countries including France, the U.K. and Italy are suffering from heat wave and drought. The World Meteorological Organization disclosed on Tuesday that this year recorded as one of the three years with the highest temperature in July, while 2016 and 2019 recorded similar heat. The unusual weather conditions causing chaos across the world from natural disasters are resulting in increased economic losses and raising concerns over a possible food crisis from bad harvest.

On Tuesday, the British weather service agency Met Office issued a four-day Amber heat wave warning to Southern England and Eastern Wales from Thursday. Amber alert is given out with the likelihood of health impacts from severe weather to the vulnerable. In England, the country usually known for raincoats as it rains often, last month is recorded as the driest July since 1935. Thames Water, the U.K.’s largest water provider is reviewing a tentative water-use restrictions.

Northern Italy has been going through a severe drought as rain is scarce since December last year. This summer, multiple parts of River Po, an important river of Italy, dried up. On Tuesday, the Independent reported that the devastatingly fast Alpine glacier melting during the heatwave revealed two human bones and aircraft wreckage, which have been buried for over half a century.

Death Valley, California, the U.S. witnessed a daily rainfall amounting to some 75 percent of one year worth of rain on Aug. 5 alone. The temperature recorded the highest of 56.7 degrees Celsius. Illinois experienced a month’s worth of rainfall on August 1 and 2. It poured 676.8 millimeters of rain over three days between February and April in the Brisbane metropolitan area in Australia resulting in the worst flood since 1974 in 48 years.