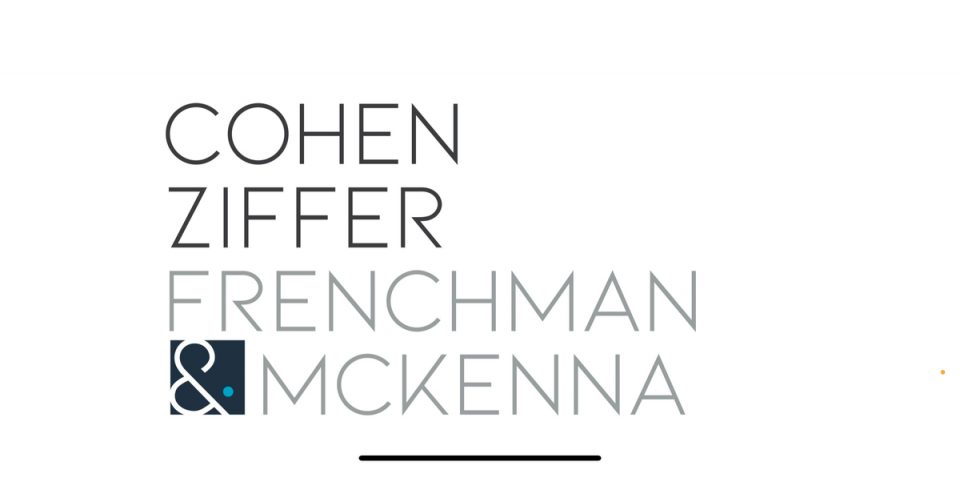 NEW YORK–(BUSINESS WIRE)–One of the nation’s most successful and longest-established insurance recovery practices, led by noted policyholder advocate Robin Cohen, is launching its own law firm. Cohen Ziffer Frenchman & McKenna opens with over 20 lawyers and staff, many of whom have worked together for more than 20 years at prestigious litigation firms, recovering billions of dollars for policyholder clients and securing landmark judicial rulings. The firm will be based in New York and expects more lawyers to join in the coming months.

Cohen most recently led the insurance recovery practice at trial firm McKool Smith, where she worked alongside her longtime partners Adam Ziffer, Kenneth Frenchman and Keith McKenna. The group has earned a national reputation as fierce advocates for policyholders in high-profile disputes against insurance companies with the biggest monetary stakes. Among other victories, the team earned a first-of-its-kind decision on flood limit clauses that allowed the New Jersey Transit Corporation to access up to $400 million in coverage after Superstorm Sandy. Their trial wins include a jury verdict worth more than half a billion dollars in an asbestos coverage case on behalf of Warren Pumps LLC that changed the law on all-important allocation questions.

“We know how to lead policyholders through their most important insurance disputes – often with the future of their organizations on the line,” Cohen said. “This was the right time to start our own firm. Our tight-knit team has never been stronger, and the issues confronting our clients have never been more consequential.”

The firm’s leadership team will also include Audrey Wilson, who will serve as its chief operating officer. Earlier in her career, Wilson worked with the founding partners of Cohen Ziffer in her capacity as an operational executive at Dickstein Shapiro.

In 2020, the Cohen Ziffer group expanded to handle a wave of COVID-related business interruption claims from policyholders around the country. The firm expects highly valuable insurance issues to continue proliferating in the coming years – from property damage claims arising from natural disasters to a likely influx of director and officer claims arising from reinvigorated securities enforcement in the new presidential administration.

At their new firm, the lawyers of Cohen Ziffer will continue to represent a client base of Fortune 500 companies, hedge funds and private equity firms.

– With over 30 years of experience, helped her clients obtain more than $5 billion in insurance assets.

– Named an Insurance MVP by Law360 five times, one of the 50 Most Influential Women Lawyers in America by The National Law Journal, and one of the “Top 100 Trial Lawyers” in America and Insurance Lawyer of the Year by Benchmark Litigation for three consecutive years; also ranked by Chambers USA nationwide and in New York for Insurance: Dispute Resolution: Policyholder (Band 1), among a host of other recognitions.

– Named an Insurance MVP by Law360 and a National Insurance Litigation Star by Benchmark Litigation; also ranked in Chambers USA in New York for Insurance: Dispute Resolution: Policyholder (Band 3), among other recognitions.

– Named an Insurance MVP by Law360 and ranked by Chambers USA in New York for Insurance: Dispute Resolution: Policyholder (Band 2), among other recognitions.

– Winner of The National Law Journal’s 2020 Trailblazers Award for Plaintiffs’ Lawyers and ranked in Chambers USA in New York for Insurance: Dispute Resolution: Policyholder (Band 3), among other recognitions.

– Clerked for the Hon. Stewart G. Pollock, former Justice of the New Jersey Supreme Court from 1997-98.

The lawyers at Cohen Ziffer Frenchman & McKenna LLP (www.cohenziffer.com) guide policyholders through their highest-value insurance recovery disputes. With numerous jury verdicts, precedent-setting wins and billions of dollars recovered across a range of industries, our pledge to clients is unwavering: We know how to lead you through this.