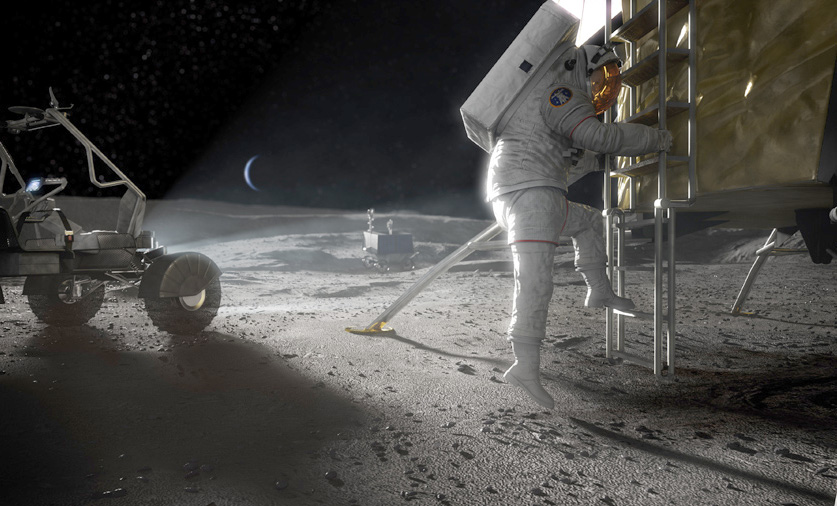 NASA is preparing to establish a regular cadence of trips to the Moon under Artemis.

To help the agency fine-tune its approach, NASA will award firm fixed-price, milestone-based contracts of up to $45 million for commercial-led work under a broad agency announcement released July 1, 2021.

NASA is seeking new work to mature designs and conduct technology and engineering risk-reduction tasks for the human landing system, which will ferry Artemis astronauts from lunar orbit to the surface and back. Prior to opening the call for commercial space lunar transportation on a recurring basis, NASA is asking U.S. companies to hone HLS concepts and safety measures.

Companies awarded work under this research and development procurement, known as NextSTEP-2 Appendix N, will help NASA polish requirements for the future recurring services solicitation, which will secure regular crewed trips from Gateway in lunar orbit to the lunar surface and back.

“We are priming U.S. industry to become reliable service providers in the lunar marketplace,” said Greg Chavers, assistant deputy for Systems Engineering and Integration for human spaceflight at NASA Headquarters in Washington, D.C. “Riding on American ingenuity, Artemis astronauts will explore new areas of the Moon, where we will unlock mysteries of the solar system for the benefit of all.”

NASA’s goal is to enable the safest and lowest cost long-term approach to accessing the lunar surface, and to be just one of multiple customers purchasing services in the lunar transportation market.

“The approach for recurring Moon landing services is truly a collective effort between NASA and U.S. Industry,” said Lisa Watson-Morgan, human landing system program manager at NASA’s Marshall Space Flight Center in Huntsville, Ala. “This announcement is a chance for the pioneering private sector to claim their stake in the emerging lunar economy and make history with NASA.”

Early engagement allows companies to continue the development of their sustainable HLS concepts, provides an opportunity for new companies to enter the competitive lunar marketplace, and gives them access to NASA experts. This is an opportunity distinct from the initial crewed lunar landing demonstration mission, which will serve as proof of concept for the Artemis lunar landing architecture.

“Landing humans on the Moon – and achieving a resilient presence there – is no small feat. Lunar landers are a major piece needed to set Artemis in motion toward that goal,” said Kathy Lueders, NASA’s associate administrator for Human Exploration and Operations. “We are another step closer to proving, once again, that NASA is a global leader in space exploration. Our presence at the Moon will inspire the next generation of diverse scientists, engineers, and explorers to take even greater leaps.”

In addition to soliciting design studies and risk-reduction activities, the Appendix N Broad Agency Announcement seeks industry feedback on sustaining HLS requirements, as well as safety and mission assurance, design and construction, and health and medical standards. NASA expects to award HLS Appendix N contracts before the end of the calendar year, and then to seek proposals for repeatable HLS services in 2022.

Artemis missions will include sending a suite of new science instruments and technology demonstrations to study the Moon, landing the first woman and first person of color on the lunar surface, and establishing a long-term presence. The agency will leverage its Artemis experience and technologies to prepare for humanity’s next giant leap – sending astronauts on a two-year round trip to Mars and back.

Learn more about Artemis at https://www.nasa.gov/artemis.