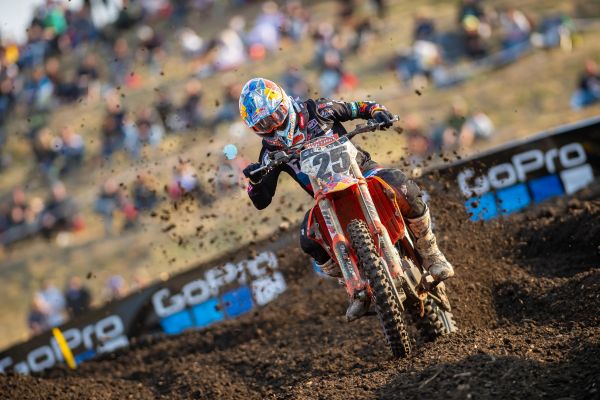 Following a seven-round stint on the eastern half of the U.S., the 2020 AMA Pro Motocross Championship began its western descent with Round 8 of the nine-race series at Thunder Valley Motocross Park. Red Bull KTM Factory Racing Team’s Marvin Musquin made the best of a challenging day as he raced to a sixth overall at the penultimate round.

The Frenchmen entered the race weekend at less than 100% capacity after coming off two big crashes at the last two rounds. He didn’t get off to the best start in Moto 1 as he found himself back in eighth on the opening lap. He quickly passed his way up to seventh and he maintained that position for most of the race. With four laps to go, he overtook sixth to ultimately finish just outside the top-five in Moto 1.

Musquin hit the reset button in Moto 2, powering his KTM 450 SX-F FACTORY EDITION off the line to capture the holeshot before settling into a top-five position early on. He struggled to gain forward momentum on the hard-packed Thunder Valley MX track, where he ultimately brought it in for eighth-place in the second moto. Heading into the season finale next Saturday, Musquin maintains third overall in the highly-contested 450MX Championship.

Marvin Musquin: “It’s frustrating. Obviously, last weekend I did good in more of the sandy conditions but this weekend was harder dirt and the track was a bit difficult, just a very tough day overall. It’s been a tough two weeks since my crash at Millville and then at practice at WW.

I rode a couple laps this week but I can’t train on the motorcycle during the week because of my thumb. On race day, pain isn’t the issue but strength-wise it’s not awesome and confidence-wise I was off. We’ll do everything we can to finish on a high note at Pala next weekend.” 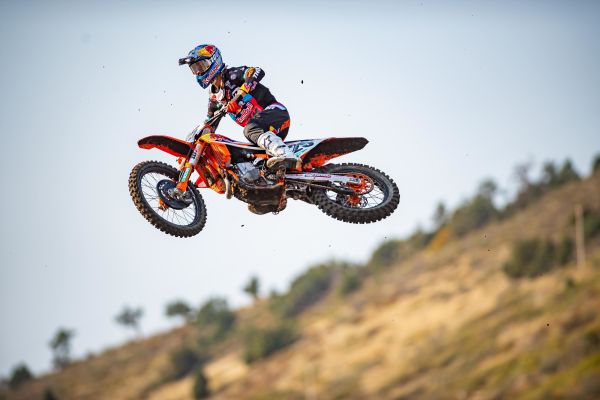 
Monster Energy Star Yamaha Racing’s Justin Cooper came into the penultimate Lucas Oil Pro Motocross round at the Thunder Valley MX Park with a win as the goal. It came to fruition for the New Yorker who finished the day on top with a 2-1 moto score. The 250MX points leader, Dylan Ferrandis, maintained his points lead with only two motos remaining this season, following a 1-3 moto result f more >>


Dallas Daniels continues to distance himself from the competition as the season hits the final stretch. The Estenson Racing rider scored his fourth-consecutive win Friday night at the Atlanta Short Track I to extend his points lead in the Progressive American Flat Track AFT Sin more >>


How to Watch: WPS/FLY Racing Thunder Valley National on Saturday


The 2020 Lucas Oil Pro Motocross Championship continues tomorrow with the WPS/FLY Racing Thunder Valley National on October 3. Colorado’s Thunder Valley Motocross Park will be the site of the eighth round of the championship, where the world’s best riders will tackle the mile-high altitude of the track, which sits at the highest elevation of any other professional motocross venue in the w more >>


Daniels, Rush Storm to Another 1-2 Finish for Estenson Racing


Dallas Daniels strengthened his bid for the AFT Singles crown with another dominant victory Saturday night at the Dallas Half-Mile II, in Mesquite, Texas. His teammate Mikey Rush joined him on the podium for a stellar Estenson Racing 1-2 finish at Round 10 of the Progressive American Flat Track Series. On the AFT SuperTwins side of the tent, JD Beach returned to a top-10 finish. Kol more >>


Ferrandis, Cooper Bring the Heat with a 1-2 Finish in Florida


Monster Energy Star Yamaha Racing’s Dylan Ferrandis set a blistering pace to win both motos at the WW Ranch National and expand his points lead in the Lucas Oil Pro Motocross 250MX Championship. His teammate Justin Cooper joined him on the podium with two solid moto finishes (4-2) for second overall. Shane McElrath battled through the challenging conditions to take a top-five with a more >>


Barcia Fights Back for Top 10 Finish at WW Ranch


Monster Energy Yamaha Factory Racing Team’s Justin Barcia once again displayed his fighting spirit with an impressive charge through the pack in the second moto on Saturday afternoon. His charge secured 10th overall with a 5-13 result at Round 7 of the Lucas Oil Pro Motocross Championship in Jacksonville, Florida. more >>


The seventh round of the 2020 Lucas Oil Pro Motocross Championship, sanctioned by AMA Pro Racing made its way to northeastern Florida for the annual GEICO Motorcycle WW Ranch National. With hot and humid weather at WW Ranch Motocross Park, the world’s best riders faced one of more >>


The 2020 Lucas Oil Pro Motocross Championship continues today with the GEICO Motorcycle WW Ranch National on September 26. Florida’s WW Ranch Motocross Park will be the site of the seventh round of the championship, where the world’s best riders will tackle the soft and sandy soil. more >>


Once again Dallas Daniels has put his Estenson Racing Yamaha YZ450F on top of the box. He expanded his points lead with a strong performance in the Progressive American Flat Track AFT Singles Championship at Friday night’s Dallas Half-Mile I in Mesquite, Texas. His teammate Mikey Rush soldiered on to finish eighth in challenging conditions. AFT SuperTwins riders JD Beach and Kolby C more >>


Monster Energy Attack Performance Yamaha Racing’s Cameron Beaubier went unchallenged in Sunday’s MotoAmerica Superbike race two to complete a perfect weekend at Barber Motorsports Park in Leeds, Alabama. Teammate Jake Gagne had a technical issue early but fought back to finish fifth and hold on to his runner-up position in the championship.   more >>


The Lucas Oil Pro Motocross Championship will officially kick off the second half of the 2020 season with the Thor Spring Creek National on September 19. Minnesota’s famed Spring Creek Motocross Park will be the site of the sixth round of the championship, where the world’s best riders will tackle some of the most infamous jumps in obstacles in American motocross and potentially catch a glimpse more >>


Monster Energy Attack Performance Yamaha Racing’s Cameron Beaubier capped off his stellar weekend at New Jersey Motorsports Park with another victory in Sunday’s race two to further extend his points lead in the MotoAmerica Superbike Championship. Teammate Jake Gagne rebounded from a tough weekend in Millville, New Jersey, to take the runner-up spot by .014 of a second.
more >>


Estenson Racing’s Dallas Daniels led from start-to-finish to score his third win of the season at the Williams Grove Half-Mile II today. The win moved the 17-year-old to the top of the American Flat Track AFT Singles standings as the series reaches the halfway mark. His more >>


Mikey Rush bounced back Friday night to score his first win aboard the Estenson Racing Yamaha YZ450F at the Williams Grove Half-Mile I in Mechanicsburg, Pennsylvania. Teammate Dallas Daniels followed him across the finish line for a stellar 1-2 finish, which tightened up the points gap in the American Flat Track AFT Singles Championship as the series approaches the halfway mark. On the AFT Supe more >>


Monster Energy Yamaha Factory Racing Team’s Broc Tickle had a solid ride at the RedBud National II finishing eighth and fifth for a sixth overall result in Buchanan, Michigan. His teammate Barcia was able to salvage some points on a tough day with eighth overall (5-10) as the Lucas Oil Pro Motocross Championship hits the halfway mark of the season. more >>


Musquin round out RedBud MX doubleheader weekend with a consistent performance

The fifth round of the 2020 Lucas Oil Pro Motocross Championship featured an intense afternoon of racing in both the 450 Class and 250 Class on America’s Labor Day holiday. The iconic RedBud MX provided close racing throughout the day and completed the championship’s first-ever do more >>


It was a tough weekend for the Estenson Racing AFT SuperTwins Team, but JD Beach and Kolby Carlile soldiered on to score points at the American Flat Track Springfield Mile doubleheader in Springfield, Illinois.The team put in a lot of hours in be more >>


Estenson Racing’s Dallas Daniels scored his second win of the season in a thrilling American Flat Track AFT Singles first Main Event of the Springfield Short Track doubleheader on Friday night. The 17-year-old was unable to repeat his spect more >>


Monster Energy Star Yamaha Racing’s Shane McElrath bounced back from a tough first moto to lead laps and come out third overall based on his 8-2 moto scores at Round 4 of the Lucas Oil Pro Motocross Championship at RedBud in Buchanan, Michigan. more >>


Monster Energy Yamaha Factory Racing’s Justin Barcia proved he had the speed to be at the front of the pack at Round 4 of the Lucas Oil Pro Motocross Championship, overcoming a tough Moto 1 to bounce back and finish third overall (6-2) at the RedBud National I. Teammate Broc Tickle had a good showing at his home track in Buchanan, Michigan, scoring inside the top 10 in both motos to more >>


After racing his way to a second-place podium finish in Moto 1, Red Bull KTM Factory Racing Team’s Marvin Musquin came away with a fourth overall at Round 4 of more >>

Explained: What does an early F1 factory shutdown mean for the teams?