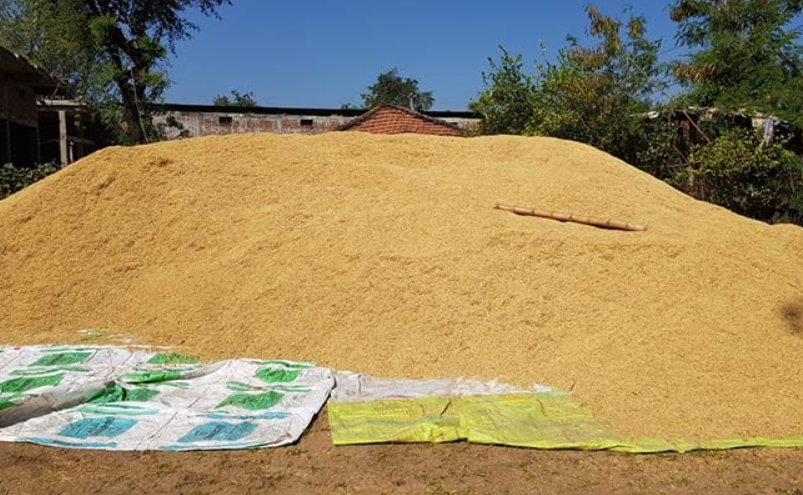 Bhopal: To quell the simmering discontent among farmers, the Bharatiya Janata Party-ruled Madhya Pradesh government has doubled the procurement of farm crops on Minimum Support Price (MSP) in the past 18 months, as per data.

Procurement of Rice and Wheat by MP (In lakh tonne)

In the current fiscal year, MP has already procured a record 128.16 lakh tonnes of wheat till October, the second-highest procurement of wheat in the country after Punjab.

Despite being an agrarian state, farmers in Madhya Pradesh did not actively protest against the three farm laws that are now set to be repealed. The agitation, if any, was confined to the Gwalior-Chambal belt, the northern region of the state bordering Delhi.

This was despite the fact that in consonance with the Centre’s three farm laws, MP enacted its Model Mandi Act in May 2020 after amending MP Krishi Upaj Mandi Adhiniyam 1972. The new Model Mandi act allowed traders to pick up grains from the farmers’ doorstep without coming to the mandis and paying the mandi tax.

This decision of the government to promote private mandis led to a demand by the registered traders to bring down the mandi tax from 1.70% to 0.5%. It led to a week-long strike of the mandis called by the traders, after which the government reduced the tax to 0.5%.

To facilitate traders during the COVID-induced lockdown, the government introduced Sauda Patrak, allowing traders to purchase farm crops from outside the mandis while paying tax to their registered mandis.

Speaking about it, Badal Saroj of the All India Kisan Sabha (AIKS)said, “Despite the farmers suffering and inconvenience of the traders, what went in favour of the ruling dispensation was the security of MSP that continued for the farmers. While it was amply clear that the three farm laws once enacted would suspend MSP, the government ensured that grains were constantly procured while all the while reiterating that MSP would continue in a bid to quell any agitation.”

Saroj further added that the three farm laws had an immediate impact on the functioning of mandis, with many becoming as good as defunct. Consequently, the mandis suffered a major blow, with 47 of the 259 mandis in the state recording zero business, while another 143 saw their business drop by nearly 50-60% until October 2020. Many instances of farmers getting cheated by traders after doing business outside mandis were reported.

The mandis got a new lease of life in January 2021 only after the Supreme Court put the farm laws on hold. The MP government revoked its Model Mandi Act, discontinuing private mandis and regulating trade. Despite a dip in the trade in mid-2021 resulting from the second wave of COVID, it quickly regained, with the mandis recording a 73.61% surge in the trade in October 2021. Across the 259 mandis, 211 lakh tonnes of produce were brought to the mandis for sale in October 2021 against 121 lakh tonnes in October last year.

Eyeing an increase in trade, the State Mandi Board has launched an exclusive Sauda Patrak App in June 2021 and restored the mandi tax from .50% to 1.7% in February. In just four months, the app has recorded over 3.17 lakh transactions with a sale of around 13.23 lakh tonne farm crops making it overall 16% of the total sale this year. The earning of mandis have surged by 10% in comparison to the previous year.

Sauda Patrak was launched during the first wave of COVID, giving traders an option to legally buy crops from farmers’ doorsteps by paying minimal mandi fees of 1.7% on the government’s declared MSP.

“With the debate over the mandis sweeping across the nation, it’s high time to upgrade mandis with the help of technology and new ideas. With an aim to make the doorstep sale of crops legal and feasible, Sauda Patkar brought it. After the initial success and to cut down the paperwork, the Board has launched Sauda Patrak App to minimise the multiple channels. In just a couple of months, it has shown outstanding results,” said Vivek Narwal, Managing Director of State Mandi Board.

Spelling the details, Narwal further said, “We are constantly upgrading the Sauda Patrak App, and in the next six months, we will launch another app with the name “MP Farm Gate”, a unified platform to sell and purchase crops by maintaining quality and MSP without coming to the mandis. It will have a database of farmers as well apart from traders.”

Comparison of Arrival of Crops in MP Mandi (In tonnes)

Out of seven divisions, mandis in Bhopal, Gwalior and Ujjain divisions are still incurring 15-24% losses. But the two divisions – Rewa and Jabalpur- have seen a massive surge in sales of 54% and 18%, respectively, compared to the previous year.

“We have also seen a 10% surge in mandi tax earnings in comparison to the previous year,” Narwal added.

Commenting over the issue, Irfan Jaffri, convener of Jagrit Kisan Sanghathan, pointed out that the Sauda Patrak has basic flaws.

“When a farmer brought his crop to mandis, officials auctioned it, and the highest bidder got the crop. Mandi officials ensure the payment to farmers within the stipulated time and also keep an eye on the wrongdoings of the traders inside the mandi. But, Sauda Patrak comes with zero accountability. There is no mechanism to ensure MSP or check any wrongdoings at farmers’ doorstep.”

He further said, “Sauda Patrak may bring taxes to the mandis, but it’s not the best possible way to benefit farmers.”

In response, Mandi Board MD Narwal said, “The board has created a flying squad to check the wrongdoings of the traders. In the last couple of months, the squad has collected over Rs 5 crore from the traders as a fine.”

Badal Saroj claimed that Sauda Patrak is the advanced version of the Union Government’s farm laws which allows the sale and purchase of crops outside the mandi with zero guarantees of MSP.

“What if a trader purchases 20 tonnes and shows 5 tonnes in the App. Is there any mechanism to check? Besides, farmers get better rates in mandis because the rates fluctuate daily based on the quality of crops. Above all, MSP is the key, and Sauda Patrak does not guarantee it.”

Speaking on non-payment of the grade three and four employees of 136 mandis, Angira Pandey, regional head of Sanyukt Sangharch Morcha MP Mandi Board, said, “Out of 259 mandis, the payment of grade three- and fourth-class employees are due for pass five months because the Board did not get Rs 415 crore of the previous year from the Government.”

While convener of Mandi Board association BB Faujdar said, “With the stroke of first COVID-19 lockdown, all 52 check posts set up on the district and state borders to curb the illegal sale of crops by traders outside the mandis are shut. The board should open it.”