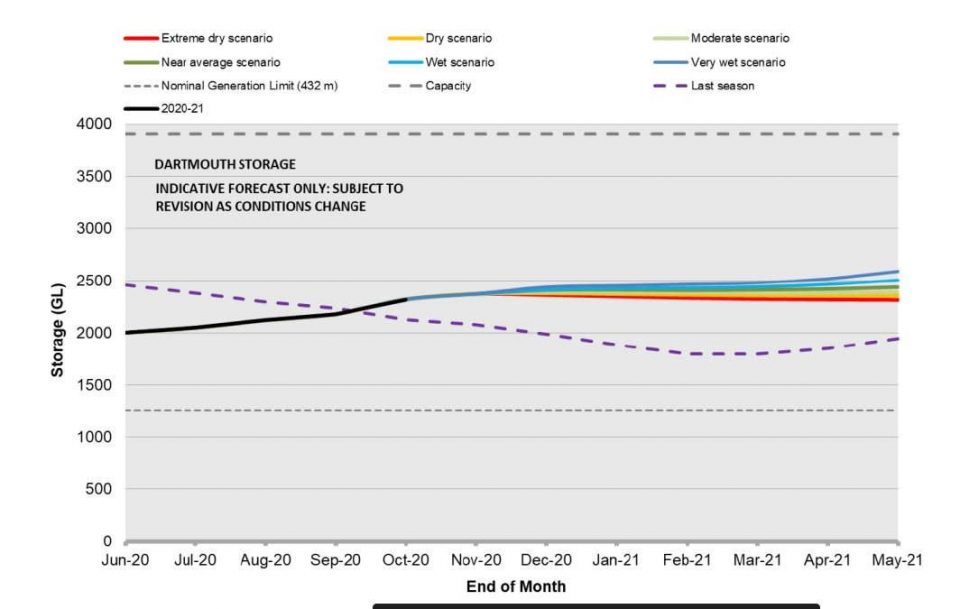 Improved water availability for irrigation in the Murray system this summer also brings with it some challenges for river managers.

The MDBA has flagged an increased risk of not being able to deliver water on demand, depending on how the season unfolds.

A recently released outlook for the season has found that there is a significant risk of a system-wide shortfall in the ‘dry’, ‘moderate’ and ‘near average’ seasonal scenarios.

Currently conditions are tracking close to those assumed in the ‘moderate’ scenario.

The current risk of a system shortfall has increased compared with the risk of shortfall at the start of the 2020–21 water year as a result of improved water availability and forecast higher demands downstream of the Barmah Choke, with the Bureau of Meteorology’s forecast for warmer than median temperatures along the Murray potentially increasing conveyance losses and irrigation demands downstream of the choke.

The MDBA also notes no water is currently available in Menindee Lakes to meet Murray system demands, and is not likely to be available over summer and early autumn unless conditions turn wet in the northern basin in the coming months.

With supply stretched to full capacity, any increase in losses or diversions, higher than assumed in these scenarios, would likely lead to a system shortfall without implementing additional measures.

One option would be to call Goulburn inter-valley transfer at rates above 40  Gl per month in December to April, noting that Victoria has requested IVT deliveries are aimed to remain at or below 40 Gl per month for this period because higher flows in the lower Goulburn River at this time of year damage the ecological condition of the river channel and waterway.

The MDBA has implemented a process where system shortfall risk is being monitored and reported to states fortnightly. If or when the risk of a system shortfall under current operations becomes too high, direction will be sought from the Basin Officials Committee on what additional measures will be implemented to reduce the risk.

The MDBA says this decision will need to be made with appropriate lead times to prevent a system shortfall.

While flow in the mid-Murray through January and February is likely to be broadly similar to last year, the risk of delivery shortfall remains.

The latest MDBA outlook says shortfalls in supplying peak demands might occur during severely hot and windy periods, which can rapidly increase water diversions and evaporation.

“The nature of these climatic events means they are difficult to forecast,” the outlook said.

“Water takes around three weeks to flow from Hume or Eildon dams to lower parts of the system, meaning that by the time a period of extreme heat is forecast, it may be too late for the additional water required to arrive downstream.’’

How Catherine Coley Of Binance.US Sees Digital Dollars As A ‘Binary’ Choice For America

Swedish Greencarrier explains why there are not enough containers