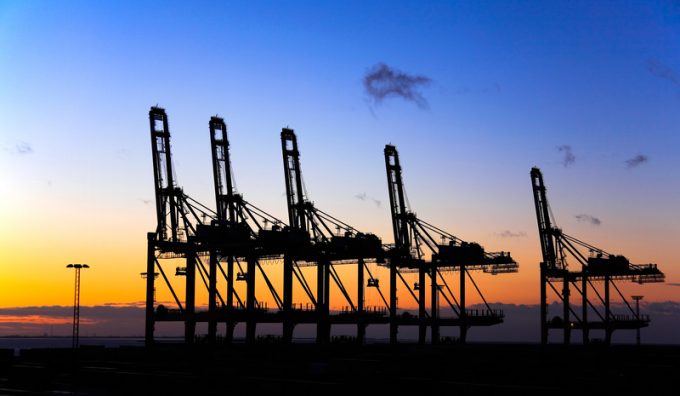 As carriers continue to leave import containers stranded at North European ports and charge exporters more than $5,000 to ship a box to Asia, the pressure is growing for regulatory intervention.

And UK importers today face major challenges from the decision by Ocean Alliance members to divert five more vessels from Felixstowe to Zeebrugge in December.

An advisory on Friday told UK customers that the Cosco Shipping Azalea, Ever Goods, Ever Globe, CSCL Jupiter and CSCL Uranus would no longer call at Felixstowe and discharge their UK imports at the Belgian port.

The 2M and THE alliance partners are also diverting ships away from the heavily congested UK ports, the former discharging UK cargo at Bremerhaven.

And The Loadstar understands that, due to a dearth of open feeder tonnage and terminal capacity issues, there is little prospect of UK cargo being relayed back until January.

The Loadstar also understands that some carriers are discussing omitting Felixstowe for the whole of January, fearing the port will become “saturated for several weeks” after Christmas.

However, liners’ options are becoming limited, due to hub terminals at Antwerp and Rotterdam also becoming very congested. But, “our priority is to get the imports off and our equipment back to Asia,” a carrier source told The Loadstar last week.

Export bookings from the UK have been suspended by several carriers and are increasingly only available on payment of a premium fee from other North European ports.

MSC advised on Friday that it was hiking its 40ft FAK rate for December from Antwerp to Shanghai by a huge 300% to $5,000. It said the industry was “facing very significant operational issues that have a serious impact on the reliability and regular supply of inventory”.

A source at a rival carrier suggested the strategy was to deter bookings so that MSC could return its empties quicker to Asia.

“However, it’s really a win-win if they do get some bookings at that rate,” he added.

Meanwhile, the European Shippers’ Council (ESC) has joined forces with European freight forwarders association CLECAT to lobby the European Commission to intervene in the crisis.

“Customers are rightly irked that liners have been taking advantage of the capacity crunch to increase revenues much beyond their costs,” said Denis Choumert, president of the ESC.

“Ongoing service unreliability, coupled with the record profits of shipping companies at times of crisis, clearly depicts a seriously disrupted market and demonstrates that carriers have been passing tremendous hikes on spot rates and imposing heavy surcharges above the fixed-term contractual rates.”

Willem van der Schalk, president of CLECAT, said: “The costs for the freight forwarding industry are huge, they range from the rebooking of shipments to sometimes losing customers because there is simply no service made available by carriers.”

A joint communique noted that ocean carriers serving Europe benefited from “special privileges” afforded to them by the Consortia Block Exemption Regulation (CBER) which had been renewed in April “to the dissatisfaction” of liner customers.

“Such privileges are now excessive as they allow carriers to use tools to manipulate the market,” it said, and added that it was “perplexed” that the EC had not responded so far to the crisis.