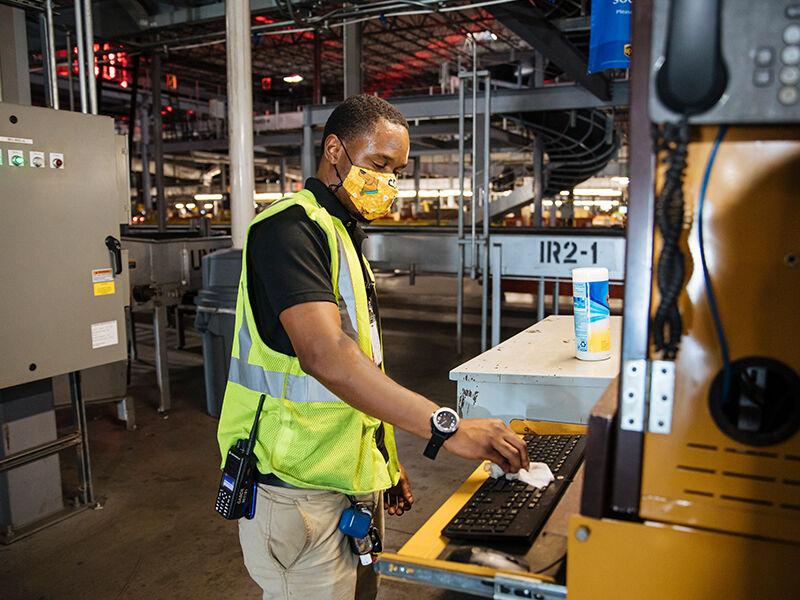 MONUMENT • The Board of Trustees on Jan. 4 unanimously approved the preliminary site plan for a new UPS distribution center.

The distribution center is part of the first phase of the planned Falcon Commerce Center. The UPS facility is to be built on nearly 17 acres in an area zoned for industrial development, south of Baptist Road, east of Interstate 25, near the existing Pilot Travel Center, Valero Gas Station and Pioneer Landscape Center.

Town Planner Debbie Flynn presented the board with conceptual renderings of the 98,000-plus square-foot facility. Plans include possible future growth to the south of the property, anticipated to be 12-15 years down the road.

Flynn noted truck traffic for the center would access the facility from Squadrons Drive, via Woodcarver Road, rather than Terrazzo Drive because that access point will be more manageable for company vehicles.

The ordinance was recommended for approval by the town planning commission under the condition that no building permits are issued until access permits are issued by either El Paso County or the Town of Monument, depending on which entity has ownership of Woodcarver Road and Baptist Road in that area at the time.

“Having these jobs, that business here will help good commercial growth and provide more focus on our town without a doubt,” Trustee Jim Romanello said.

During the public comment portion of the hearing, a concern for the impact on the Santa Fe Trail near the development was brought up, as well as potential light pollution from the facility’s exterior lighting.

Lynn noted the Santa Fe Trail already has crossings in that area, and the exterior lighting for the distribution center is required to follow the town’s dark-sky ordinance. Lighting cannot be on past a certain time of night and all fixtures must project illumination down to the ground instead of into the sky.

Trustee Mitchell LaKind asked what regions the distribution center would serve when operational. On hand to answer was Sergio Enriquez, Plant Engineering Project Manager at UPS, who said the facility’s coverage would extend north of Monument to almost the southern end of Englewood and cover a large portion of northern Colorado Springs including Monument.

The ordinance was approved by trustees 7-0.

Among other ordinances approved during the meeting was Filing No. 8 of Sanctuary Pointe’s third phase, which involves the next 27 individual lots to the phase. Flynn, who presented the aspects of the filing, clarified traffic access to the next filing is the same as the three points into the general development.

Trustees asked about the plan to eventually extend Sanctuary Rim Drive to connect to Higby Road to the north. Flynn verified that was the plan, but the extension is involved in a different approved development.

No public comments were made on the ordinance and trustees approved the filing 7-0.

Trustees also approved an ordinance regarding animal control, presented by town attorney Andrew Richey, which he said would codify municipal laws with the rest of El Paso County. Richey said the ordinance does not impose any more enforcement or fees on the Town of Monument itself. Although it calls for an increase in dog and cat licensing fees, those are collected by the county and by veterinarian offices.

“In the past, we have adopted county code by reference,” Richey said. “It’s led to recent enforcement difficulties as well as access to the county code.”

The Humane Society of the Pikes Peak Region, with which the town has approved a contract for it to resolve animal control issues as needed, is changing its registration fee structure but not changing any costs to individual municipalities, he said. Although HSPPR is not a county operated entity, it operates under a grant from El Paso County and a variety of other sources.

Mayor Don Wilson asked why the town would have its peace officers enforce animal control issues and determinations on dangerous dogs if its under contract with the Humane Society. Richey said it is the town’s peace officers who make the determination if there is an instance of a dangerous dog and write the appropriate citations, but the Humane Society provides animal control resources the town does not have.

LaKind asked if dangerous dog determinations are based on breed or actions the dog has taken. Richey said the determination is based on an animal’s actions.

The Board of Trustees approved the ordinance 6-1, with Mayor Wilson dissenting.

Later in the meeting, the board approved the renewal of its contract with HSPPR to provide animal control resources for the town. Richey said the new contract had no change in terms or cost than the previous year. He said animal control issues make up a substantial amount of the municipal court docket. The contract was approved 7-0.

Theresa May in Brexit warning to Boris Johnson’s government