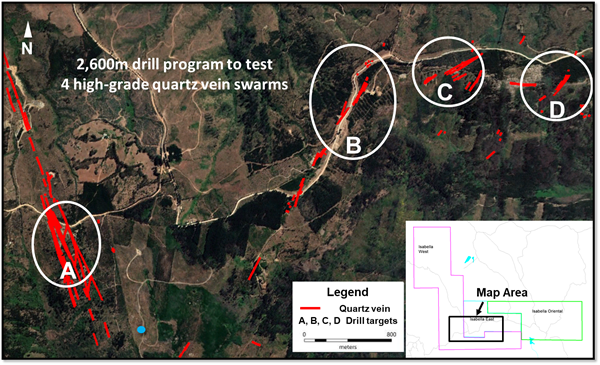 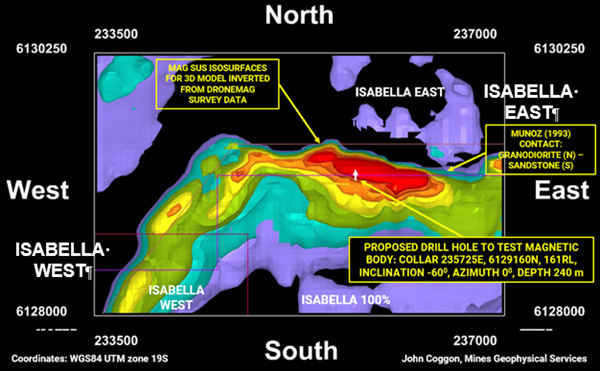 Processing of UAV magnetic survey data has defined an area of high magnetics (view vertically down above) in sediments adjacent to the granite contact. Montero is proposing a drill hole to test the magnetic body for potential sediment-hosted mineralization

TORONTO, Sept. 15, 2020 (GLOBE NEWSWIRE) — Montero Mining and Exploration Ltd. (TSX-V: MON) has initiated exploration of the Isabella gold silver project located approximately 200 km south of Santiago and 125 km south of Yamana’s Minera Florida mine in the Southern Coastal Range of Chile. The Company has tied up mineral rights to exploration claims that cover an area of 67 km2 and make up the Isabella Gold Silver Project. To date Montero has defined four high grade Au-Ag priority targets for initial drill testing and a sedimentary polymetallic geophysical target within the Isabella West and Isabella East claims. On August 30, 2020 Montero completed a US$50,000 option payment on the Isabella East claims. No drilling has ever been carried out at Isabella.

Dr. Tony Harwood, President and Chief Executive Officer of Montero commented, “Montero has initiated a confirmatory sampling program at the Isabella gold project. The program is designed to better define the extent of the gold silver vein structures and to investigate a geophysical target in the sediments recently identified by Montero. A diamond drilling program is planned.”

Isabella Gold – Silver Vein Targets
A total of four target areas have been identified and are slated for drilling using a track-mounted diamond drill (Figure 1).  A 2,600m drill program is planned to test the vein targets. Initial drilling will test one mineralized quartz vein array within the Isabella West property (Target A) and three vein arrays within the Isabella East property (Targets B, C, and D).

Processing of data from the 101 line kilometer, drone-supported aerial magnetic survey completed by the previous owner has identified an extensive area of high magnetics within sediments proximal to the granitic contact.  Montero contracted John Coggan of Mines Geophysical Services to reinterpret the magnetic data and magnetic high anomaly at depth (Figure 2).  Previous mapping over this area has identified discrete zones of Fe-oxide breccia boulders (gossan) which have returned assays up to 800 ppm Zn and 400 ppm Cu.  Montero considers such concentrations in gossan boulders to be anomalous and the Company will further evaluate the area for potential sedimentary polymetallic geophysical target by drilling. A 240m drill hole is planned to test the newly identified magnetic target.

Montero has a 100% interest in a Chilean private company (“ChileCo”) which holds all the mineral rights to the Project. ChileCo directly holds 100% of the mineral rights to 18 km2 of claims and has two subsidiaries with 49 km2 under option agreements: 1) ChileCo holds an 85% interest in the Isabella West claims and; 2) ChileCo is earning an 85% interest in the Isabella East claims. Montero paid US$50,000 on August 30, 2020 with further payments of US$400,000 due by August 2022 to complete the 85% earn-in.

Qualified Person
This press release was reviewed and approved by Mr. Michael Corey P.Geo., whom is a member of the Association of Professional Geoscientists of Ontario (APGO) and is a Qualified Person for the purpose of National Instrument 43-101 and a technical advisor to Montero. Mr. Corey has visited the property and reviewed previous sampling techniques and analysis.  A data review was also undertaken by Marcial Vergara B.Sc. who is based in Chile and also a Qualified Person. The qualified persons have extensive experience in gold exploration in Chile.

About Montero
Montero is a junior exploration company focused on finding, exploring and advancing globally significant gold deposits in Chile. The Company is in the process of relinquishing its portfolio of battery metal projects in Africa to focus on gold opportunities in Chile. Montero’s board of directors and management have an impressive track record of successfully discovering and advancing precious metal projects. Montero trades on the TSX Venture Exchange under the symbol MON and has 21,880,818 shares outstanding.

Neither TSX Venture Exchange nor its Regulation Services Provider (as that term is defined in the policies of the TSX Venture Exchange) accepts responsibility for the adequacy or accuracy of this release.
CAUTIONARY STATEMENT REGARDING FORWARD-LOOKING INFORMATION: This news release includes certain “forward-looking information” within the meaning of applicable Canadian securities laws. Forward looking information includes, but is not limited to, statements, projections and estimates. Generally, forward-looking information can be identified by the use of forward-looking terminology such as “plans”, “expects” or “does not expect”, “is expected”, “budget”, “scheduled”, “estimates”, “forecasts”, “intends”, “anticipates” or “does not anticipate”, or “believes”, or variations of such words and phrases or state that certain actions, events or results “may”, “could”, “would”, “might” or “will be taken”, “occur” or “be achieved”. Such information is based on information currently available to Montero and Montero provides no assurance that actual results will meet management’s expectations. Forward-looking information by its very nature involves inherent risks and uncertainties that may cause the actual results, level of activity, performance, or achievements of Montero to be materially different from those expressed or implied by such forward-looking information. Actual results relating to, among other things, completion of the HOA, results of exploration, project development, reclamation and capital costs of Montero’s mineral properties, and financial condition and prospects, could differ materially from those currently anticipated in such statements for many reasons such as: an inability to complete the HOA on the terms as announced or at all; changes in general economic conditions and conditions in the financial markets; changes in demand and prices for minerals; litigation, legislative, environmental and other judicial, regulatory, political and competitive developments; technological and operational difficulties encountered in connection with Montero’s activities; and other matters discussed in this news release and in filings made with securities regulators. This list is not exhaustive of the factors that may affect any of Montero’s forward-looking statements. These and other factors should be considered carefully and accordingly, readers should not place undue reliance on forward-looking information. Montero does not undertake to update any forward-looking information, except in accordance with applicable securities laws.

Figure 2: Processing of UAV magnetic survey data has defined an area of high magnetics (view vertically down above) in sediments adjacent to the granite contact.  Montero is proposing a drill hole to test the magnetic body for potential sediment-hosted mineralization
https://www.globenewswire.com/NewsRoom/AttachmentNg/11943e40-b89e-4fed-86ac-5048ff4d16b3