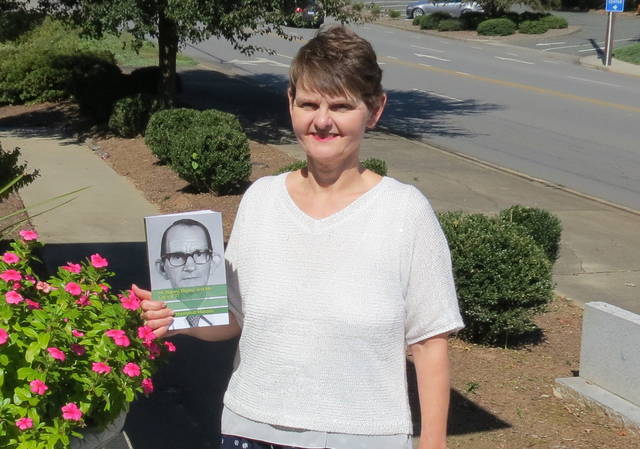 Most everyone encounters a special teacher who makes a lasting impression on students through lessons taught both in and out of the classroom — but in many cases, their legacies become forgotten as memories fade and years pass.

Thanks to local native Marsha Honeycutt Marcela, this will never happen in the case of George D. Rigney, a longtime faculty member of various area schools who died in September 2018 at age 86.

Marcela, herself a career educator, has made sure of that by authoring a book titled “Mr. Rigney, Rigney, and Me (or is it “I”).” It honors the career of a unique man who taught legions of appreciative students at campuses in Surry and the neighboring Virginia counties of Carroll and Patrick.

“How many people do you know that started teaching at age 18 in a one-room schoolhouse?” Marcela said during a recent interview when discussing the subject of her new book and his early days in Virginia.

In addition to those long-forgotten educational institutions that once dotted rural landscapes across America, Rigney taught at Flat Rock Elementary School in the community from which Marcela hails.

He later migrated to Stuart High School in Patrick in the late 1960s and continued as a faculty member at a new campus merging that county’s five high schools which opened in 1970. He logged 33 years in all in Patrick County until retiring from the educational profession in 1999.

In 1989, Rigney, who taught English and other subjects, was named one of the top 64 educators in the nation by Newsweek magazine, after being nominated by a former student who returned to Patrick County High as a history teacher, David Ratliff.

All profits from the new book about Rigney, richly illustrated with photographs, will help continue his work and legacy through the George D. Rigney Memorial Scholarship Fund.

Though universally well-liked by students, Rigney could be a stern disciplinarian when needed to maintain order in the classroom, with his appearance mirroring some dramatizations of the Ichabod Crane schoolmaster terrorized in “The Legend of Sleepy Hollow.”

George Rigney was a man of some eccentricity, known for wearing mismatched shirts and ties of sometimes-garish patterns and colors.

The veteran teacher — whose face was framed by distinctive large ears — had a way of looking into one’s soul with a characteristic steely-eyed stare. Yet it was one that, upon further review, revealed a genuine human being with a big heart lurking behind.

“Mr. Rigney pulled up his sleeves and got in the trenches, changing the world one student at a time,” Marcela writes in her book.

Rigney was known for going beyond his normal school role to do this, such as volunteering for the bus detail when kids were dismissed to go home. “He always did parking lot duty,” recalled Marcella, who taught with Rigney at PCHS during one stop along her educational career.

“He wanted to be the last person they saw at the end of the day — there’s was nobody on Earth who would do that,” Marcela explained when recently discussing the lengths Rigney would go beyond a mere classroom educator.

This dedication extended to graduation time. “He also was the voice that male students heard read their names during high school commencement,” the new book about Rigney recounts.

“He took that job super-seriously,” Marcela further writes, which included enunciating each syllable of students’ names with precision in a higher dignified manner. “He believed this could be the most important moment of his students’ lives, so he treated it that way in preparation and delivery.”

Marcela further remembers George Rigney once telling her that he paid for an extra lunch each day to give to a student or join one in need of a friend, all part of his trademark down-to-Earth attitude as a no-frills man of the people who treated everyone equally.

“He always ate lunch with his students or with the custodians.”

Rigney built a rapport with the youths and is recalled as the only teacher to routinely receive standing ovations during faculty introductions at student assemblies greeting the start of an academic year.

And unlike other educators who see such positions as a reward, Rigney turned his back on an administrative job at the central office in Patrick County during his career in order to stay close to students.

While Marsha Marcela really got to know Rigney at Patrick County High, where she became a teacher in the 1980s, their paths had crossed earlier at Flat Rock Elementary in Surry.

“He left Flat Rock School the year I entered as a first-grader,” said Marcela, now in her late 50s, whose parents were Roy and Savada Honeycutt. She now lives in Blowing Rock.

Rigney’s first teaching assignment, however, had begun in 1949 at Blue Ridge School, which was actually a church building. Though he hadn’t graduated from high school, Rigney passed a state completion exam that allowed him to teach at the unaccredited facility, where Marcel’s book notes that he earned $100 a month for instructing 48 students in different grades.

While working toward his degrees, Rigney taught at various schools, one- or two-room facilities in southern Virginia, such as Turner School, Snake Creek School, Pilot View School at Groundhog Mountain, Dewey School and Round Knob School.

Once licensed to teach, Marcelas’s book details that the pioneering educator’s first job at an accredited campus was as a handwriting teacher at St. Paul School in Carroll County.

Rigney came to Flat Rock Elementary in 1965 to teach fifth grade, the same year he earned a master’s degree at Radford.

“I was 23 years old when I went to Patrick County High School,” said Marcela, a North Surry High School graduate who later obtained undergraduate and graduate degrees from Appalachian State University and still has relatives residing locally. Her husband also has enjoyed a long career in public education.

She was known as Miss Honeycutt when joining the PCHS faculty in the mid-1980s, logging 14 years at the Virginia school before taking other positions at locations including Charlotte and Boone.

Rigney became a mentor to the young teacher, she notes in the book.

“He taught me the art of teaching to all grades and populations so that my teaching resume includes teaching skills at all grade levels, ranging from low-functioning kindergartners with disabilities to Advanced Placement seniors.”

Marcela says the guidance from Rigney would enable her to meet challenges later in rural, suburban and metropolitan educational settings.

She formed a longtime friendship with Rigney, which included visiting him at his backwoods abode and going on hikes in the mountainous Fancy Gap area where he lived with a pet wolf named Brownie.

Marcela also spent much time with Rigney in his later years, when he lost his right leg to frostbite suffered after cutting wood in cold conditions, including driving him to medical appointments and to visit friends in Carroll and Patrick counties.

The book tells of an episode at a Stuart nursing home Rigney was taken to at one point, where a number of his former students were employed. A line of about 20 people formed outside his room after they learned Rigney was there.

He suffered from a number of health issues, including a heart ailment, before dying at Forsyth Medical Center.

Marcela even named one of her two sons Rigney after him, which is the reason for the book’s title, “Mr. Rigney, Rigney, and Me (or is it “I”).” The parenthetical reference relates to the way in which strict teachers insist on the proper use of “I” and “me.”

Rigney Marcela wrote one of the chapters in the book, detailing the influence George Rigney had on him and his desire to carry on the veteran educator’s legacy. The younger Marcela is a special education teacher at J.V. Washam Elementary School in Charlotte-Mecklenburg Schools.

“He was very proud of my son,” Marsha Marcela said of Rigney during the interview.

“I wanted to write a book while he was still alive,” she added regarding her efforts to honor his contributions. “He didn’t want a book published.”

“Mr. Rigney, Rigney, and Me (or is it “I”)” was released around the two-year anniversary of George Rigney’s passing. It was produced by Laurel Hill Publishing, headed by local historian Tom Perry, who has made the book available at local venues.

“Tom has done a good job of taking care of that for me,” Marcela said of its distribution.

Copies of the book can be found at certain stores both in Mount Airy and nearby Virginia communities. It also can be ordered on the Amazon website or by emailing the author at marshamarcela12@gmail.com.

Though George Rigney is no longer around, the author hopes her book about him and her experiences with the unique educator will form a memory in the public consciousness which lives on into infinity — especially among his former students.

“First of all, I know it will be a long time, but eventually it could be forgotten, and I wanted to have something left behind,” Marcela said of preserving the story behind the legendary educator and his dedication to the teaching profession.

“I want his to be a household name,” the author stressed.

“Years from now, somebody will say, ‘yes, he taught my great-grandpa.’”