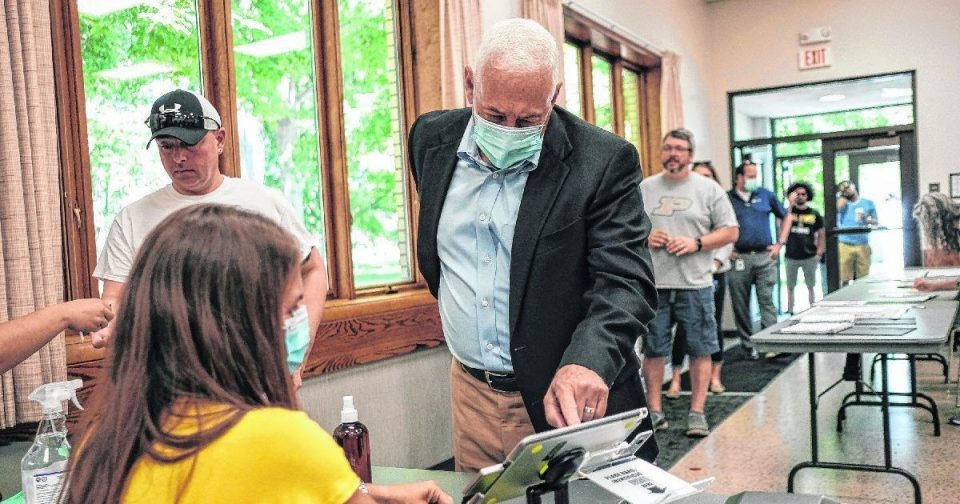 Rep. Greg Pence, a first-term Republican congressman from Columbus seeking re-election Nov. 3, has a significant campaign finance advantage in fundraising over his Democratic opponent, Jeannine Lee Lake, as the two candidates prepare for the final stretches of the campaign.

Pence, 63, wants another term in the U.S. House of Representatives during a national reckoning on racial justice while the country grapples with the economic and public health toll of a pandemic that has claimed at least 3,127 lives in Indiana, including at least 54 in Bartholomew County.

Pence is being challenged by Lake, 50, a community activist, businesswoman and former reporter for The Muncie Star.

So far, Pence’s campaign committee, Greg Pence for Congress, has reported a total of about $1.99 million in receipts from Jan. 1, 2019 through this past June — roughly 35 times more than Lake, who reported $56,949 in receipts over the same time period, according to filings with the Federal Election Commission.

While it would appear Pence is handily in control of this congressional campaign, there has been controversy on the campaign trail over the past two weeks, with the candidates, or their party’s leadership, making accusations and filing complaints against each other.

Lake has filed an incident report with the Delaware County Sheriff’s Office, alleging harassment after she alleges she received material in the mail at her home about federal election campaign filings that she considered to be an attempt to threaten and intimidate her and her staff.

Lake declined to discuss what was specifically sent in the mail, saying law enforcement agencies advised her not to talk about the contents of the packages.

Lake, who is one of three Black candidates seeking federal office in Indiana this fall, also said she received phone calls on Aug. 25 from an unknown individual who allegedly called her a racial slur and warned that she is “in trouble.”

The incident report states the mail contained information about her committee treasurer and “’Federal Election Campaign Questions’ paperwork,” but “there were no threats made in the mail,” according to a copy of the incident report obtained by The Republic.

Lake said she or her campaign staff have filed similar reports or complaints with the Federal Bureau of Investigation, Ball State University Police Department and the Indiana Civil Rights Commission.

On Thursday, Indiana Democratic Party Chairman John Zody issued a statement, condemning “disturbing comments on social media” made against Lake and “a disturbing package sent to the candidate via mail that contained materials of an accusatory and harassing nature.”

“It should go without saying that everyone in politics should condemn attacks on candidates that have no place in our discourse, but it has become evident that not everyone believes this,” Zody said in the statement. “As such, we are making clear our condemnation of any attacks that are harassing to her or her candidacy, including the sharing of any personal information. We call on Congressman Pence and all GOP Party Officers in the Sixth Congressional District to join us in condemning behavior aimed at candidates personally.”

On the Republican side, Delaware County and state GOP leadership have taken aim at some of Lake’s financial disclosures, which her committee filed late this year.

On Aug. 23, Indiana Republican Party said party executive director Matthew Huckleby mailed a copy of the FEC’s candidate guide to the Indiana Democratic Party to “review the FEC rules and provide guidance for Lake’s desperate campaign,” according to a press release from the Indiana GOP.

“Calling Congressman Greg Pence a racist might get you honorary membership to the Socialist Squad, but it won’t get you elected by Hoosiers,” Huckleby said in the statement. “The Indiana Democrat Party should disavow her candidacy, but we know they won’t. At the very least, Indiana Democrats could inform their candidates how to properly comply with federal fundraising law.”

Lake’s committee filed its first and second quarter reports on Aug. 27, as well as a financial disclosure report with the Clerk of the U.S. House of Representatives, according to federal records.

Lake filed a statement of candidacy with the FEC on Aug. 14. Lake is on the ballot for the Nov. 3 election, according to the Indiana Secretary of State’s Office.

Authorized committees of individual running for the House or Senate are required to file quarterly reports to the FEC and register with a statement of candidacy and designate a principal campaign committee within 15 days of becoming a candidate, according to the commission’s website.

The FEC has civil enforcement authority and can impose fines if it finds a violation.

In the meantime, the FEC also has been in communication with Pence’s campaign committee, Greg Pence for Congress, and sent the committee a notice dated Aug. 23 seeking to clarify $111,469 in unitemized receipts in its pre-primary report and a refund of a contribution the commission believes may not have previously been disclosed by the committee, according to the notice.

The notice does not necessarily mean that Pence’s committee committed a violation. The committee has until Sept. 28 to respond to the FEC, the notice states.

Last month, Pence was criticized by the Lake campaign for allowing the sale of objects with racist depictions of African Americans at an antique mall he co-owns in Edinburgh, The Associated Press reported.

Lake had drawn attention to the objects on social media, but customers said in the story that they had complained to management at the mall about the items as far back as 2008.

Reporters who visited the store in late July and identified more than three dozen such objects that trade in Jim Crow-era caricatures and stereotypes at Exit 76 Antique Mall in Edinburgh, including a coin bank featuring an exaggerated, straw-hatted Black figure biting down on a watermelon or “Mammy” biscuit jars depicting smiling Black enslaved women. Some were hard to find, while others were clearly on display, according to The Associated Press.

Pence and his staff have not replied to questions from The Republic about the items and about other topics relating to the campaign.

When a Republic reporter approached Pence at the Bartholomew County Veteran’s Treatment Court’s graduation ceremony last week, Pence initially answered a couple questions about his campaign but then said he was not “really interested” in answering any more questions: “If you came here today to do an interview with me, I’m here for the veterans, OK? That’s what this should be about.”

“Not today, you can print that, too,” Pence said, referring to being asked questions about his campaign. “You can also print, why isn’t anybody looking at the lack of financial disclosures of my opponent?”

The Associated Press reported that Pence did not reply to multiple questions and requests for comment about the items at his antique mall. Through a spokesperson, Pence distanced himself, telling The Star Press last week that he “is not engaged in the active management” of the mall, according to wire reports.

How to view the reports