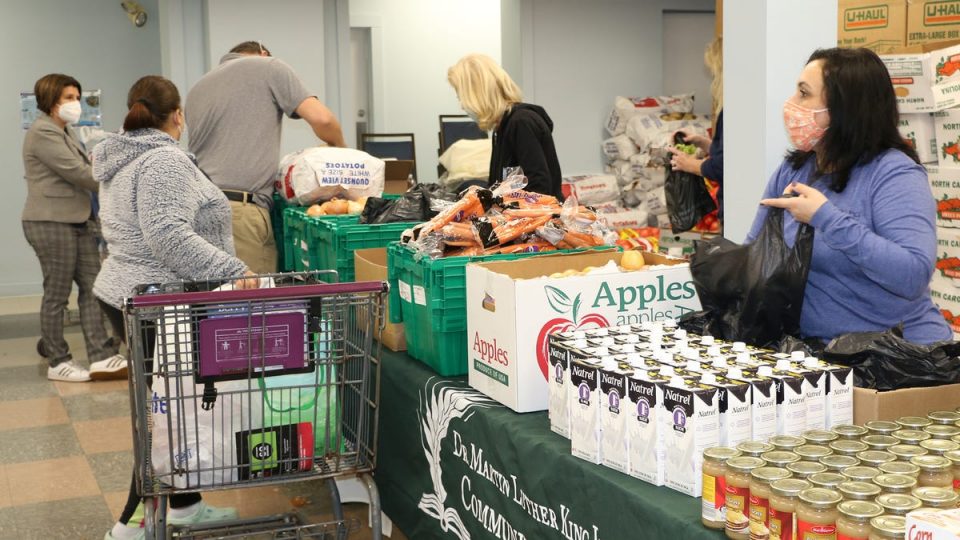 NEWPORT — Staff and volunteers at the Dr. Martin Luther King Jr. Community Center have had an interesting time this year getting their Thanksgiving food drive stocked, but thanks to donors, they currently have everything they need for the holiday.

“We started going out to stores and purchasing stuffing and vegetables and things like that,” she said.

One of the stranger things the center encountered was a limit on the smaller turkeys Strout said.

“We’ve been told that it’s because last year during COVID, everybody bought smaller turkeys because they weren’t eating in large groups, and so there are not a lot of small turkeys to purchase right now,” she said.

The center has been lucky, though, in securing enough of these larger turkeys to donate to 550 families.

Then there was trouble finding enough cranberry sauce for families.

Diner out: Bishop’s 4th Street Diner ordered to leave in January. Here’s the plan for the property.

Throughout this time, Strout said center employees have seen the price of items increase. At Thanksgiving, she said they give out fresh produce and the cost has risen significantly.

One thing she says has helped is sourcing as much food locally as possible.

Nobody goes hungry: Where you can find a free Thanksgiving meal in Newport County

“We purchase all of our fresh milk from Arruda’s Dairy in Tiverton, so the cows are there in Tiverton ready to be milked,” she said. “We also get most of our produce through Farm Fresh Rhode Island, and again, prices have gone up, but we have been able to get the fresh produce we rely on for not just Thanksgiving, but all of our hunger programs here at the center.

“So we’re really trying to focus on the local as much as we can, and that’s honestly where people can find things where they otherwise can’t get them.”

Other than the Thanksgiving food drive, the MLK Center serves soup to the community twice a week, but there has been difficulty finding suppliers for items needed to serve the soup.

“We’re having a difficult time sourcing the soup to-go cups for that program, where the distributors we normally buy that stuff through, you go online to order, and it’s ‘out of stock, out of stock, out of stock,'” she said. “And honestly, we’ve been at a point where we’ve had to buy styrofoam because that’s the only thing that’s available.”

It’s not just food that’s not available. The center was unable to get the liquid dish soap it needs for its commercial dishwasher.

“We had to go for two weeks doing a whole other sanitizing process with cleaning our dishes, which took an incredible amount of time to properly sanitize all of the dishes that we need to make our program happen,” Strout said.

The community makes it happen

Now that the MLK Center has everything needed for Thanksgiving, the focus is shifting to the Christmas food drive.

“We do give out gift cards, rather than food, at Christmas because we know that families eat ham on Christmas, and some families eat turkey, and some families eat fish,” Strout said. “So rather than us trying to figure out, we believe in client choice here at the center. We want people to be able to choose what works for a holiday meal for their family, and we’ve had to increase the amount of gift card amounts that we give out because we know the reality is a family can’t buy a Christmas dinner with a $25 gift card. So we’re giving out significantly more this year.”

Cheers: From traditional to alternative, wine options for Thanksgiving that won’t break the bank

The increase in gift card amounts is a tremendous cost to the center, but also the community has been generous in their giving, Strout said.

“We did get a pretty significant gift card donation last year from one of the local grocery stores after the holidays, and we have held onto those to use those for distribution,” she said. “But it really comes from a couple of gift cards from this person, and a few from this person, and it’s honestly the community making it happen.”

Strout said there is still a huge need for Christmas dinner gift cards, and those who want to donate can contact the center. She said donated gift cards should be to major grocery store chains that are easily accessible to public transportation.