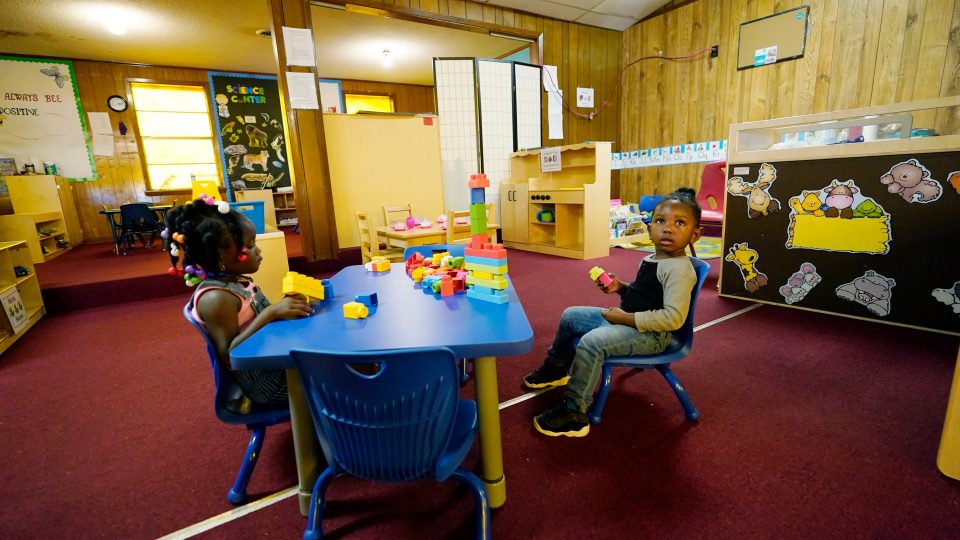 ITTA BENA, Miss. – A decade ago, the sole grocery store in the city of Itta Bena shuttered. The last bank left a few years later, followed by the pharmacy – lifelines for a small, rural community.

Because of long-standing debt with its wholesale electrical provider, the city faces complete disconnection Dec. 1. As of August, Itta Bena owed more than $800,000. That’s equal to one-third of the annual budget for the whole city – located in the Mississippi Delta, a region along the Mississippi River known for its long history of cotton farming and deep impoverishment.

The news is devastating for the community, where 40% of people live below the poverty line and 90% are Black. Itta Bena has long struggled with a decreasing tax base, white flight and job loss. The coronavirus pandemic has sparked more worry.

“It just feels like we keep losing and losing. There’s no growth,” said Patricia Young, a day care owner who submitted a petition signed by 300 residents asking the state auditor to investigate the city’s electrical department. “We just can’t take the hurt anymore. You start to wonder, ‘Do they really want us to survive?’” 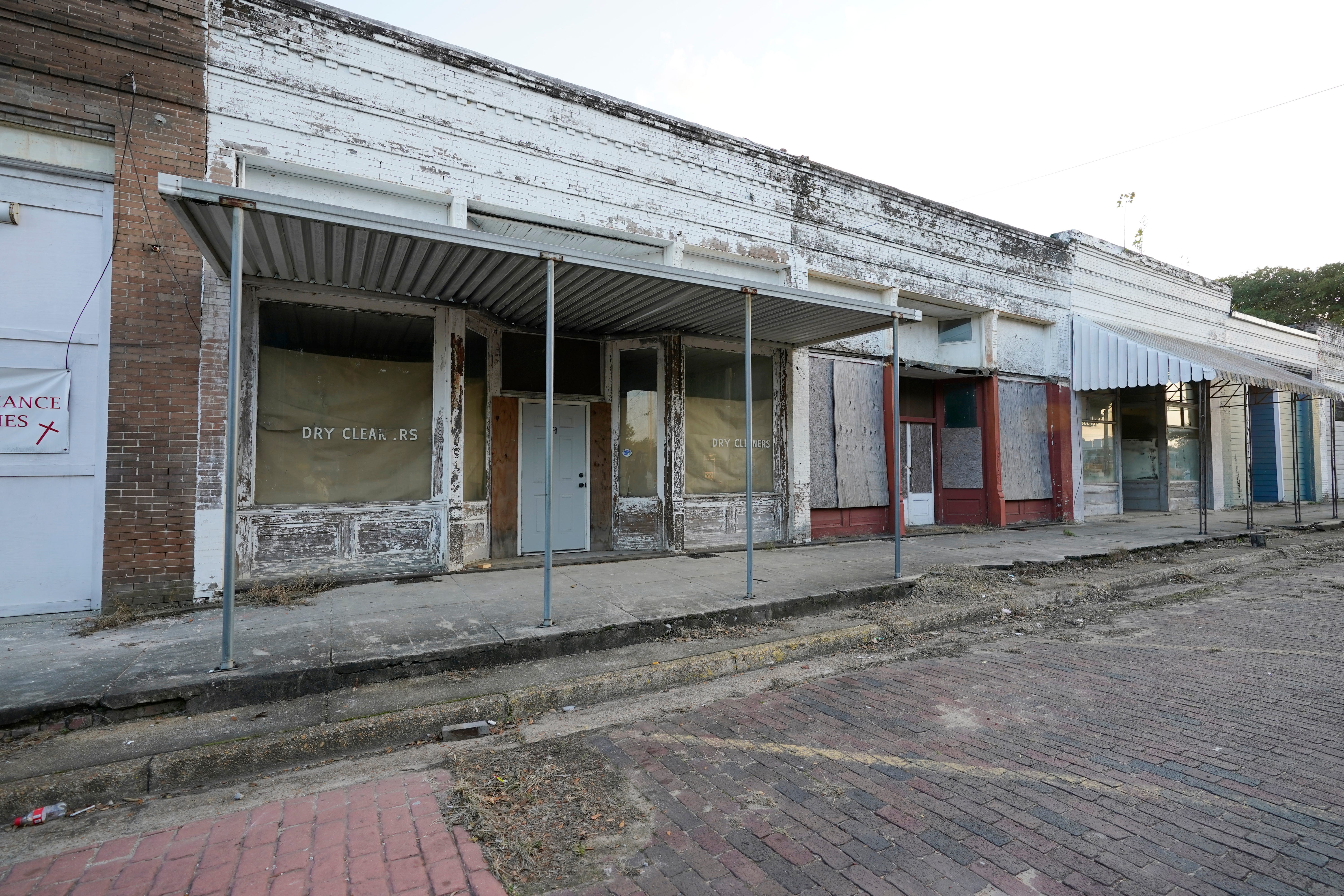 Itta Bena’s electric system is city-run and owned, and unregulated by the state. Mississippi’s Public Service Commission, which oversees utilities, opened an investigation anyway and invited the state auditor, citing safety and quality-of-life concerns. State officials are organizing meetings among the city, wholesale electrical provider Municipal Energy Agency of Mississippi, and other providers to find coverage for Itta Bena.

Brandon Presley, a public service commissioner, said he’s never seen an electric provider threaten to pull out of a city in Mississippi – or any other state. He said it’s a “failure of the city government” and that residents “deserve better than to be left in the dark.”

Itta Bena Mayor J.D. Brasel said some of the debt – more than $300,000 – stems from residents’ unpaid bills that the city now must cover. As a middleman of sorts between residents and MEAM, the city purchases electricity from the wholesaler to sell residents and is responsible for the bill. 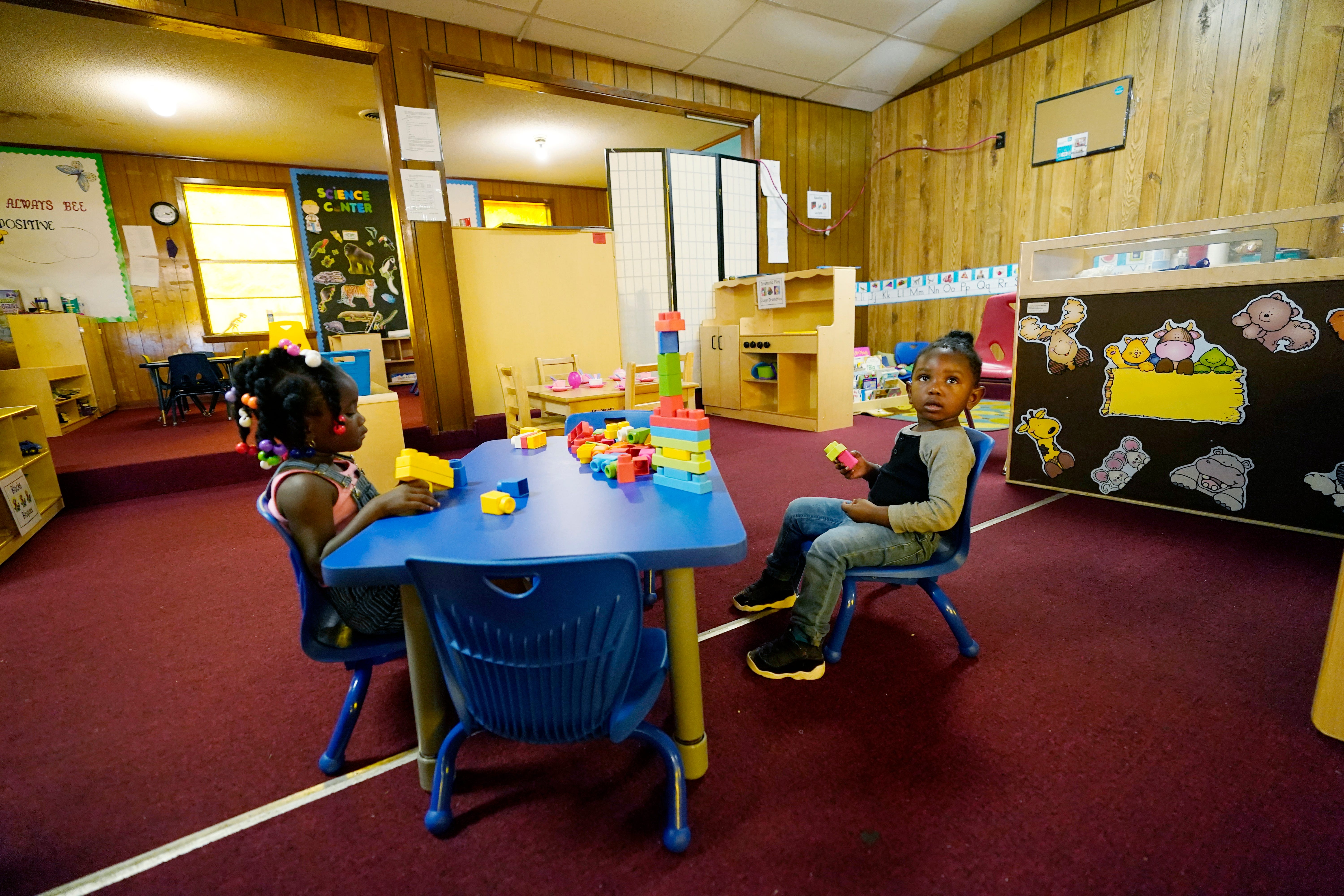 Children build a block structure in the main classroom of the School of Champions Development & Learning Academy in Itta Bena, Miss., Thursday, Oct. 22, 2020. The owner Patricia Young has spearheaded a petition signed by 300 residents asking the state auditor to launch an investigation into why they are paying what they believe is a high price for electricity from the city-run and owned utility, and yet the city has a long standing debt with the wholesale electrical provider, and is now facing complete disconnection on Dec. 1. (AP Photo/Rogelio V. Solis) (Photo: Rogelio V. Solis, AP)

Former Mayor Thelma Collins, who left office in 2017, said officials have long known about the debt but prioritized other projects. She said lack of vision and planning exacerbate problems.

Itta Bena was founded around 1850 by plantation owner, Confederate general and former Gov. Benjamin Grubb Humphreys. He chose the name, which means “forest camp” in the language of the Choctaw people, who were forcibly removed from the land. Humphreys brought slaves to help turn the Delta into the South’s cotton-producing capital.

After the Civil War, slaves were freed into a sharecropping system that resulted in generational poverty. Black families were blocked from educational and political opportunities. Industrialization led to fewer jobs in the fields. And after the Civil Rights movement made strides for racial equity and integration, white families began leaving, taking tax dollars with them. 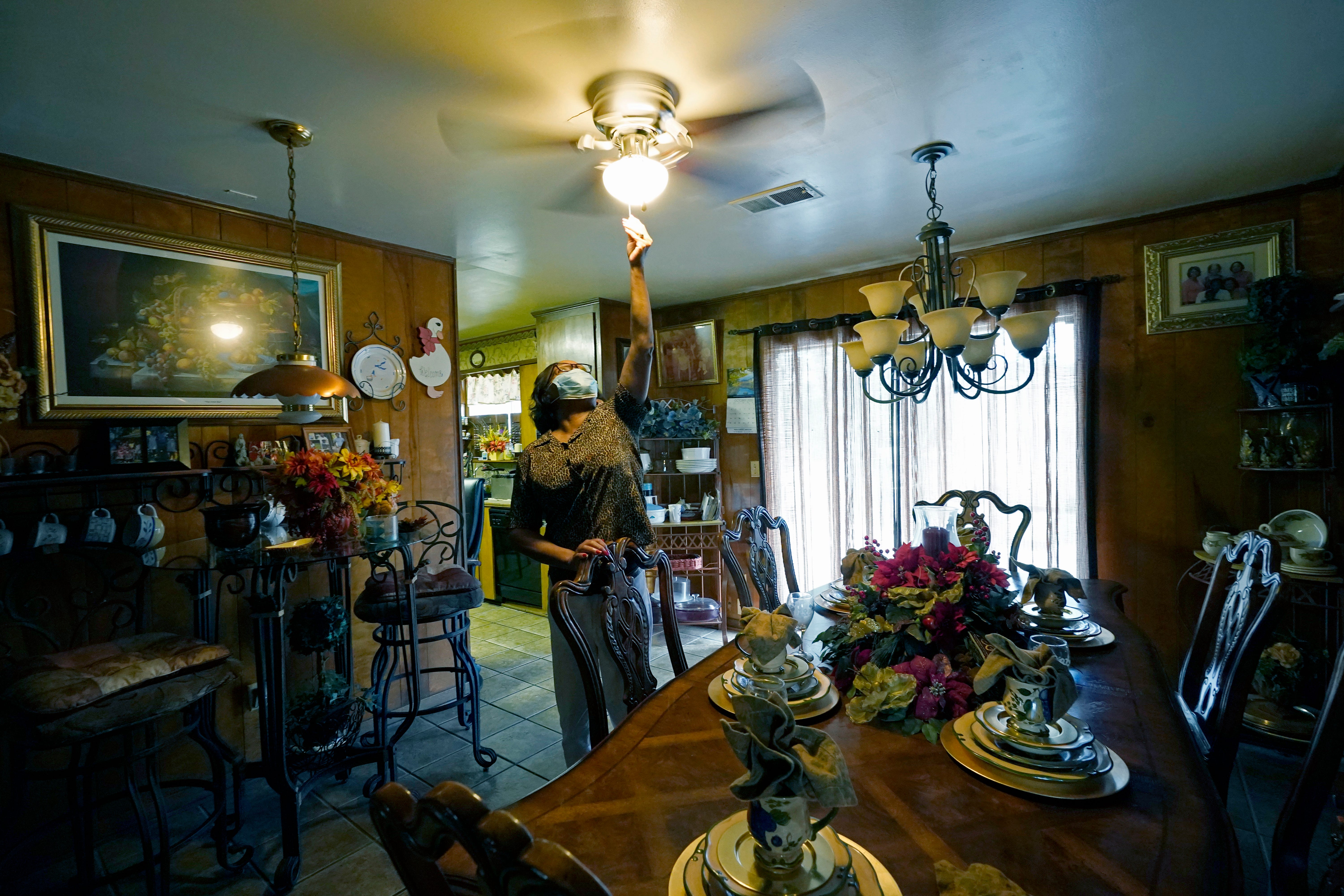 Birdia Williams turns on her ceiling fan onThursday, Oct. 22, 2020, to help cool the house she and her husband John Williams, 23 years ago in Itta Bena, Miss., home a few blocks from what was then a busy downtown. Now, the couple, living on a fix income as retirees, constantly worry on how to budget to compensate for what they believe are high electric bills from the city-run and owned utility. Because of a long standing debt with the wholesale electrical provider, the Municipal Energy Agency of Mississippi, the city is facing complete disconnection on Dec. 1. (AP Photo/Rogelio V. Solis) (Photo: Rogelio V. Solis, AP)

Birdia and John Williams bought their home 23 years ago from a white family moving away. She remembers driving through and seeing a beautiful neighborhood of nice, clean houses.

“While we moved in, they were all moving out,” said Williams, 64, a Black woman. “It’s not the same city today as it used to be. We have good people here, lovely people. But there’s nothing here anymore.”

Emma Harris, 66, was raised 10 miles away, where her parents worked on a white-owned plantation. She said her husband was born and worked on the plantation, until they married and moved to the Itta Bena area in 1978. Growing up, she remembers traveling the country road to shop in Itta Bena and seeing the “city lights” downtown.

Today, 20 downtown storefronts are abandoned. Remaining are a laundromat, a used-car seller, a clinic run by a nurse practitioner, a bar, a credit union. The corner store sells canned food, bread, fishing gear – with a small food menu from a kitchen in back.

The nearest grocery store is 10 miles away; a Dollar General sells some fruits and vegetables. Some folks, like Williams, travel 45 miles to a bargain store in Grenada for groceries.

Businesses and city offices will lose power if MEAM leaves. Some businesses purchased generators as backup. Only institutions like the historically Black Mississippi Valley State University, whose utility system is separate from the city’s, will be unaffected. 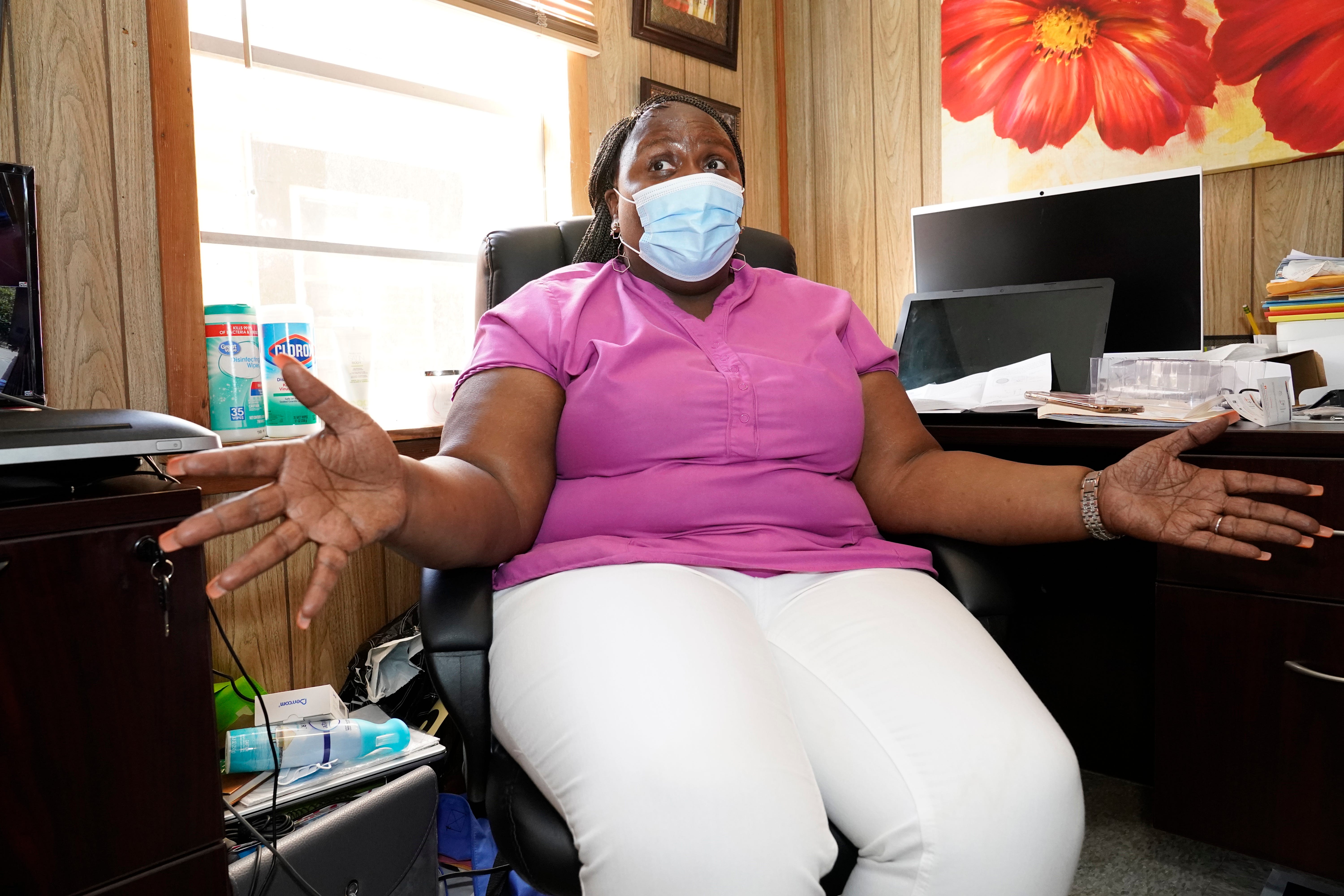 Patricia Young, owner of School of Champions Development & Learning Academy in Itta Bena, Miss., explains her constant dismay at the high price for electricity from the city-run and owned utility, on Thursday, Oct. 22, 2020. Because of a long standing debt with the wholesale electrical provider, the Municipal Energy Agency of Mississippi, the city is facing complete disconnection on Dec. 1. (AP Photo/Rogelio V. Solis) (Photo: Rogelio V. Solis, AP)

Itta Bena’s financial woes aren’t new. In 2014, the federal government placed a tax lien on city assets after officials failed to pay $200,000 in payroll taxes. In 2016, a former city clerk was convicted of embezzlement. The power debt dates back to 2009.

MEAM didn’t answer a request for comment, but in a letter shared with the Public Service Commission, President and CEO Geoffrey Wilson said the company has exercised “extraordinary patience” trying to collect.

“The situation brought about by the City’s failure to pay its MEAM invoices in full is regrettable, but it is a situation of Itta Bena’s own making,” Wilson wrote.

Residents said they were surprised to learn the city was so in debt. Itta Bena light bills are notoriously high.

Williams said monthly bills for her one-story home sometimes exceed $650. Kathy Gee, who’s lived in Itta Bena for 40 years and is on disability for lupus, said her income is about $500 monthly, and she’s received bills over $400. The mayor said he’s aware of high bills, and that rates are calculated correctly.

“My lights have been out many, many, many times because I didn’t have the money,” she said. “Knowing they are the ones in debt, you feel used. You work so hard for so long, and it feels like you get nothing in return.”

Leah Willingham is a corps member for the Associated Press/Report for America Statehouse News Initiative. Report for America is a nonprofit national service program that places journalists in local newsrooms to report on under-covered issues.