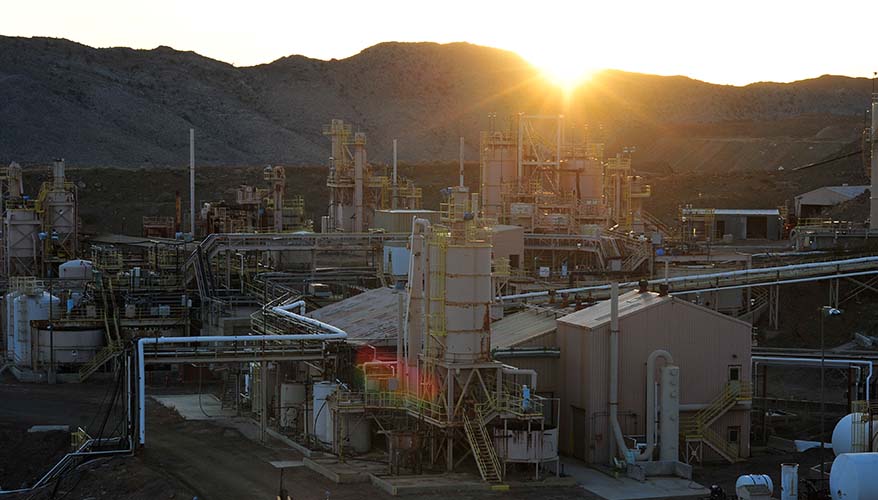 MP Materials, which operates the largest rare earth element mines in the Western Hemisphere, had a big week.

It was one of three companies on Nov. 17 to receive Defense Department grants intended to return rare earth production to the United States. The following day it was listed on the New York Stock Exchange.

The Pentagon awarded a Defense Production Act Title III grant worth $9.6 million to MP Materials so it can begin to refine the strategic minerals at its Mountain Pass, California, mine.

“This grant from the DoD is outstanding. It’s humbling. And we’re very proud of the fact that DoD is supporting us,” James Litinsky, the company’s CEO, told National Defense in an interview.

The Mountain Pass mine is the largest producer of rare earth elements in the Western Hemisphere and constitutes 15 percent of the world’s production of the minerals, which are essential to manufacture high performance magnets. China currently has a near monopoly on refining the elements and producing the magnets, which are used in a variety of weapon systems as well as commercial goods such as wind turbines and electric vehicles.

On Sept. 30, President Donald Trump signed Executive Order 13817, which — among other items — seeks to return rare earth production to the United States and break China’s dominance over the supply chain.

After separating the 17 elements needed to create magnets from the Mountain Pass ore, MP Material currently sends the raw material to China for refinement. Litinsky said the company’s goal is to do the refinement on site by 2022 and eventually cut China out of the supply chain for production of high-end magnets entirely by manufacturing them in the United States.

While the Defense Department grant is “humbling,” Litinsky noted that the company is profitable, has some $500 million of cash on hand and there is $1.7 billion of capital already invested on the site by the previous owner.

“We have a lot of capital to invest to continue this mission and we are going to invest that capital,” he said.

The Mountain Pass mine has changed hands several times since it was opened in 1952. It was idle and had only eight employees as caretakers when MP Material reopened the mine in 2017. It now has 270 employees and the company is updating some of the old infrastructure in order to meet the 2022 goal of refinement on site.

“Our mission is to fully restore the [rare earth] supply chain to the United States of America,” Litinsky said.

Most of the equipment needed for refinement was left on site by a previous owner and works perfectly well, he said. “We’re just adding in a handful of capital items and then we will be processing at Mountain Pass with the equipment we have there,” he added.

“We will ultimately, over time, make the magnets ourselves in the United States,” Litinsky said.

Litinsky noted that while the Pentagon and its contractors will be customers for the magnets — as they don’t want to depend on China for critical parts — defense-related technology will only make up 1 percent of the demand. That could not sustain a domestic industry. Instead, the majority of business will come from a burgeoning demand for electronic vehicles, wind turbines and other emerging technologies, he said.

Rare earths are only a small part of a bigger competitive picture, he added. China is already looking beyond rare earth processing and aims to dominate the electric energy sector.

“The Chinese want those jobs. They want the GDP. … They are already competing against Tesla, GM and Volkswagen, and they are already creating iconic electric vehicle companies,” Litinsky noted.

It will ultimately be up to U.S. companies to decide whether they want to sustain China’s rare earth monopoly or buy American, he said.

Part of having a monopoly — as China currently enjoys — is the ability to unilaterally lower prices and squeeze would-be competitors out of the market.

“I think it’s important to look to iconic American companies and ask them when they’re going to buy their magnetics in the continental United States,” Litinsky said.

“We need to look to our companies and make sure that they are focused on supply chain reliance. It’s not about ‘just in time’ and it’s not about lowest costs,” he added. “It’s important for a company like MP Materials to exist because we need to make sure that rare earths are not a competitive squeeze point and … that our companies in the West can have supply chain reliability.”

Clarification: Story updated to reflect that $1.7 billion was invested in the mine by a previous owner.

Governments must back common rules for demurrage and detention fees