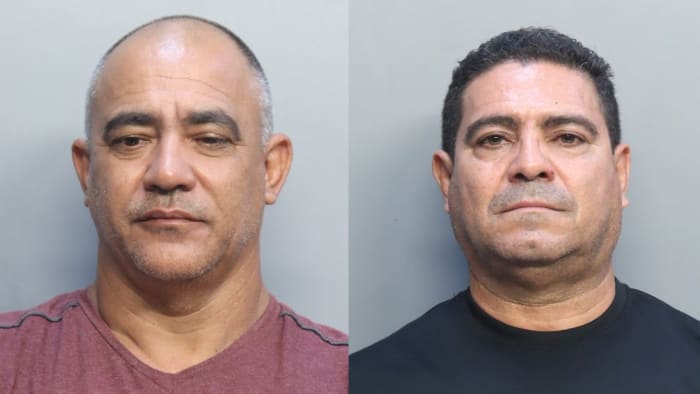 Miami-Dade police accuse Alberto Duardo Vera, 50, and William Gonzalez Torres, 55, of stealing a total of five MacBook Pro laptops, 30 Apple AirPods and Airpods Pro, plus 20 Apple iPhones and a charging cable worth a total of $21,728.35.

According to the report, a Miami-Dade police detective arrived at the LATAM cargo facility at 6500 NW 25th St. on May 19 to review CCTV footage of a theft that took place on May 1.

In the video, detectives saw the two workers removing two cargo boxes from a shipping pallet, dropping them inside of a rolling trash bin and concealing the boxes with a net, the report states.

The report goes on to say that Duardo Vera and Gonzalez Torres rolled the trash bin to a wall, reached into it, wrapped the boxes in two large jackets and left out a side door with the boxes under their arms.

All of the electronics were owned by DB Schenker, a logistics company, and were destined for the company’s offices in Santiago, Chile.

Those boxes contained more than $15,000 worth of electronics, according to the report. Police said they later discovered that DB Schenker reported nearly $6,000 worth of additional Apple products stolen from the shipping pallet, with varying dates of thefts.

Both men face charges of grand theft and organized scheme to defraud.