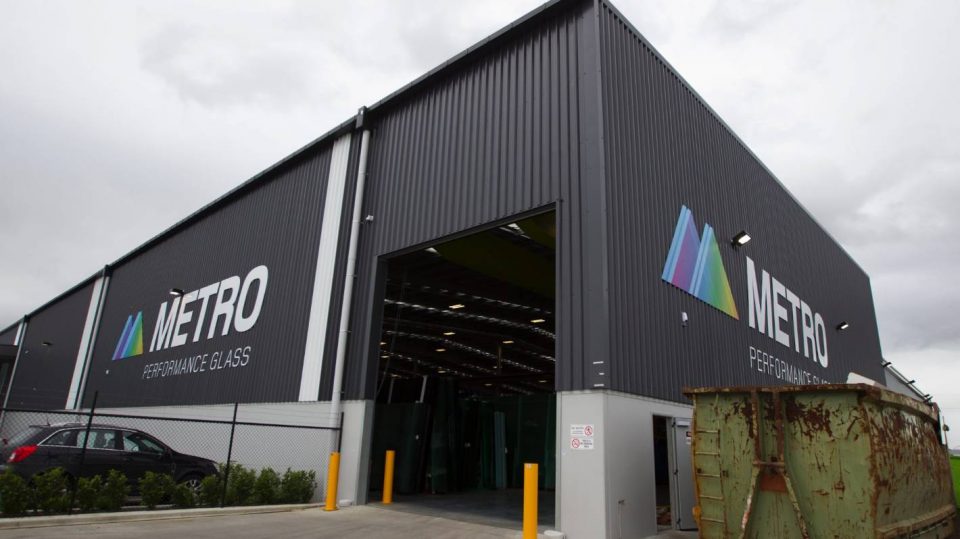 Metro Performance Glass, the country’s largest glass manufacturer, said the five-week lockdown due to Covid-19 weighed on its first-half profit.

Metroglass said after-tax profit for its combined New Zealand and Australian operations fell 2 per cent to $7.6 million in the six months to September 30. Revenue slid 14 per cent to $89.2m. It received $6.5m in Government wage subsidies during the period.

The company, which has a factory in Auckland and distributes products nationwide, was forced to close for 32 days during alert level 4 from late March to late April, meaning it had no revenue in April and reduced revenue in May. New Zealand pre-tax profit in April was $8.8m lower than April last year.

While New Zealand operations ramped up through May, with revenue and profitability from June to September broadly in line with last year, the company ended the half year with local revenue down 19 per cent to $89.2m and pre-tax profit down 26 per cent to $12.8m.

“Metroglass responded well to numerous Covid-19-driven issues including significant levels of demand uncertainty and volatility, supply chain disruptions and operating restrictions, in addition to increased levels of competition across the country.”

Commercial glazing revenue fell 21 per cent to $18m as a result of the shutdown. However, there were no significant project cancellations and the company’s forward bookings at September 30 were 29 per cent higher than at the same time last year.

New Zealand’s regional economies have bounced back from Covid-19 better than expected Figures to September produced by Infometrics show an economic activity bounce in regions such as Tasman and Northland, which were both up at least three percent on the same quarter last year.

“This increase is in part due to the shutdown period, but also reflects our improved performance and acceptance rates,” Mander said.

Revenue from retrofit double-glazing increased 2 per cent to $12.1m despite the shutdown period, with more enquiries and work accepted than last year. Forward bookings were 76 per cent higher at September 30 than the same period last year.

“In a time of limited international travel, many customers are electing to invest and upgrade their properties having spent more time working remotely and seeking a warmer, drier and healthier home,” Mander said.

Still, he was cautious about the outlook, saying market conditions remained uncertain, given the impacts of Covid‐19 and heightened market competition were likely for some time.

While building consents were stronger-than-expected in recent months, there was some risk that building activity could begin to soften early next year as a result of broader macro‐economic factors as well as local issues such as extended border restrictions and further weakness in business confidence and labour markets, he said.

“Balancing this, we’ve been pleased with the solid results in New Zealand in recent months and our customers are typically citing good forward [bookings] through into the new calendar year,” Mander said.

He said the company was monitoring significant disruptions and delays in international shipping caused by a surge in demand for sea freight and backlogs at key ports.

Metroglass has increased stock levels and expected an increase in shipping related costs in the second half of the financial year, he said.

In Australia, revenue rose 3 per cent to $27.8m. Double glazing revenue jumped 18 per cent while revenue for other glass products dropped 38 per cent following a restructuring of the company’s New South Wales business last December.

The Australian operations produced a pre-tax profit of $400,000 compared with a loss of $2.3m last year.

Mander said he was confident the first-half earnings improvement in Australia would be sustained through to the full year.

The company had done a deal with its banks to ease its banking covenants, which means it will limit growth in capital expenditure and pay no dividends in the 2021 financial year.

In the first half, capital expenditure fell to $2.1 million from $4.3 million in the first half last year. It expects to step up capital investments in the second half to match levels in the same period last year.

The company expects to release a trading update in February.

Metroglass shares dropped 13 per cent to 38 cents shortly after the market opened at 10am. The shares have gained 33 per cent this year.