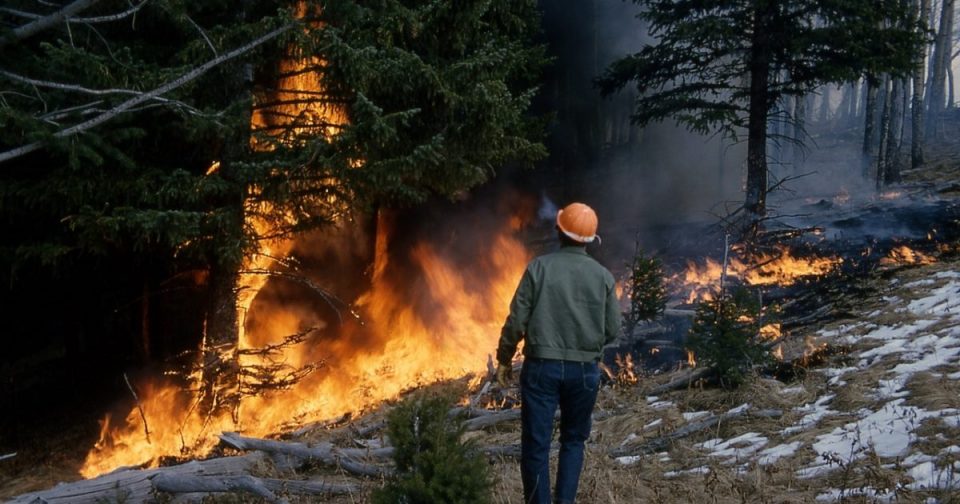 In the Western U.S., the 2020 fire season is setting new records in terms of geographic scale, fire intensity, and rates of spread. Tens of millions of people are currently being forced to breathe beneath a dense layer of smoke, as others have lost their lives and property.

With each new record-setting fire, the same question comes up again and again: is this due to climate change, or is this due to forest mismanagement? After dueling appearances on Monday, this question now appears to be a matter of debate in the Presidential campaign.

The climate change vs. management question ignores nuance that is crucial for finding scientific answers and policy solutions. The factors influencing wildfire behavior are complex, and the dominant drivers vary between different locations and events. Below are five key things to know about the causes of the current wildfire problem. Understanding them can help us navigate the question of what is driving increased fire activity and what can be done to reduce such large fires in the future.

In forested systems, climate change and historical fire suppression are two key factors promoting megafires—but their relative influence depends on location. Wildfires result from complex interactions among climate, weather patterns, vegetation (or fuels), and humans. So historically, it has been challenging to attribute the individual role of a specific driver to a specific fire.

To understand the relative roles of climate change and fire suppression in driving wildfire activity, it is useful to go beyond individual fires and to consider fire regimes (i.e., how big, how frequently, and under what conditions fires burn over time) in a particular location. Fire regimes range from being limited by climate (i.e., flammability of fuel) to being limited by fuel availability.

In climate-limited systems, there is typically enough fuel for fire to spread, but moisture is too high; these systems are characterized by large infrequent fires, which historically only occurred during climate extremes. However, warming is lengthening growing seasons across the western U.S.,  promoting plant water stress, and increasing fuel aridity. This leads to larger and more severe fires, particularly in climate-limited systems where fuels are abundant. In highly climate-limited systems, management strategies are not always straightforward because forests are not especially receptive to direct fuel manipulation. Recommendations include: “fire-use strategies” that allow natural wildfires to burn, encouraging forest resilience by reducing stressors, and using post-fire conditions to implement adaptation.

Over the last decade, a global satellite-based record of fire activity has enabled fire scientists to make major progress in understanding climate–fire relationships. We know that at large scales (e.g., across the western U.S.), there is a clear link between climate warming and increases in area burned.

In fuel-limited systems, the climate is relatively arid and conducive to fire, so fire activity is mostly driven by the amount of live and dead plant material present; these systems typically experience frequent, low-severity fires. In many fuel-limited regions (such as in southwestern Ponderosa Pine forests), extensive 20th-century fire suppression has led to overstocked forests, accumulation of dead materials, and ladder fuels that propagate fires into the forest canopy, making them larger and more destructive. In these forests, fuel management such as controlled burns and thinning can help restore resilient forest structure.

However, many ecosystems fall at intermediate positions along this climate to fuel-limitation continuum, and it remains unclear how climate change and historical fire suppression have contributed to the changes in fire activity that we are seeing at local scales (e.g., where management is implemented). In some regions, climate change is projected to push fire regimes from climate to fuel-limited. Ongoing research in the Hanan Fire & Dryland Ecosystems Lab at the University of Nevada, Reno suggests that some Northern Rocky locations are just beginning to see such a shift.

Not every fire is burning in forests. Many extreme fires in California occur in chaparral (shrublands). Chaparral ecosystems include dense stands of shrubs that grow rapidly in winter and are highly flammable in summer. Large areas of chaparral typically burn in wind-driven fires. While severe, wind-driven fires are a natural component of these systems, their geographical extent can be exacerbated by climate change-induced drying. In chaparral systems, fuel management focuses on frequently clearing vegetation around structures and communities (i.e., fuel breaks and defensible space).

Management solutions are not just more logging.  Several management activities are designed to reduce the occurrence of catastrophic wildfires. However, the most effective fuel treatments include prescribed fire or thinning treatments that won’t necessarily produce merchantable timber. In the Sierra Nevada, for example, many ecosystems contain a mixture of pine trees and shrubs. While these mixed forests benefit from fuel reduction treatments, most of the material that needs to be removed is understory vegetation (known as ladder fuels).

It is important to know when and where treatments are likely to be most effective and ecologically appropriate. Best management practices can differ between the Sierra Nevada, which has a predominantly fuel-limited fire regime vs. the Western Cascades, where the fire regime is climate-limited. Climate helps set the conditions for forest management. What works in some locations may not work in others, and climate change is creating an ever-changing baseline where what works now may not work later.

For an ignition to grow into a catastrophic megafire, climate and fuel conditions have to be right. For example, one reason the 2020 California lightning complexes spread so explosively is because high-density lightning strikes coincided with extreme temperatures and dry fuels. California’s fuel landscape has also been modified by the 2012-2016 drought (driven in part by climate change), which caused widespread forest mortality and left more than 100 million dead trees on the landscape. Drought mortality is confounded by forest health issues, including beetle and pathogen outbreaks, which are themselves exacerbated by climate change. In the Sierra Nevada, these conditions have combined with wind events, warming, and fuel accumulation (due to fire suppression) to enable lightning and human-caused ignitions to grow into massive wildfires.

Fire regimes vary across the western U.S. As a result, plants have a variety of fire adaptations depending on which fire regime they evolved under. Problems arise when fire regimes are pushed outside their historical range of variability–that can mean more frequent fire in climate-limited systems that typically experience infrequent, high severity fires (e.g., lodgepole pine forests in the Greater Yellowstone Ecosystem) or more severe fire in fuel-limited systems that are adapted to frequent, low severity fire (e.g., southwestern Ponderosa Pine forests and yellow pine and mixed-conifer forests in the Sierra Nevada).

Our ability to mitigate the risks associated with extreme fires, and their effects on communities, lives, and the environment, depends in part on why these fires are increasing in the first place. The underlying causes of wildfire cannot be reduced to a simplistic dichotomy between climate change and management. Solutions to the growing wildfire problem must be multifaceted and location-based. They must include an aggressive reduction in greenhouse gas emissions, ecologically appropriate fuel management that incorporates indigenous knowledge, consideration of local communities and resources, and strategies for living with fire.

Erin Hanan is an Assistant Professor in the Department of Natural Resources and Environmental Science at the University of Nevada, Reno. Her research lab uses process-based models, remote sensing, and empirical analysis to answer questions about how climate change will influence future fire regimes, how these shifts will alter biogeochemical and ecohydrologic processes, and how we can mitigate the effects of climate change through management.

Procurement to promote jobs, Māori and Pasifika businesses and sustainability

Dredging At The Forefront Of Corps’ 2020 Work Plan