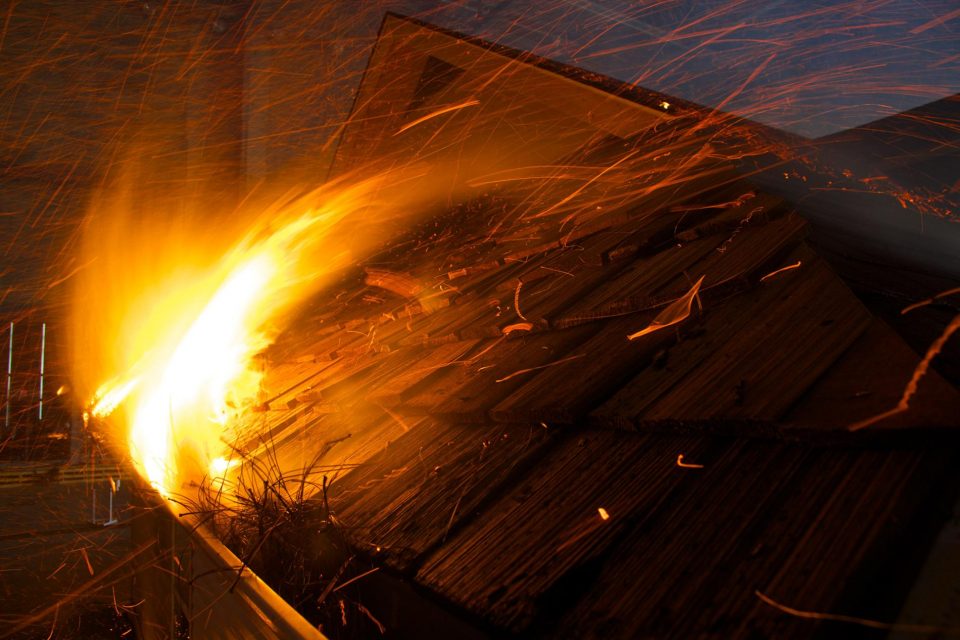 For Dan O’Meara, it was a routine sweep. An engine company from the Fresno Fire Department had just put out a neighborhood fire, and O’Meara’s team was assigned to make sure everything was extinguished. It seemed to be—till they happened to peek beneath a wooden deck in a backyard.

“My captain said, Looks like there’s a bunch of stuff under there, let’s pull it all out,” says O’Meara, a 21-year veteran of the department and now a captain there himself. “We started clearing everything out, and then we saw it—a glowing ember, sitting right there, smoldering by itself. That was lucky. If we hadn’t found it, it would have burned the house right to the ground.”

Embers may remind you of a campfire’s cozy glow, but they’re often the most dangerous part of a wildfire. Also known as firebrands, these seeds of combustion are the tiny, smoldering pieces of wood, vegetation, and debris sent aloft by wildfires, which this year have immolated 5.6 million acres—an area roughly the size of New Jersey—in the western United States.

Windborne embers can float miles ahead of a fire front, sparking spot fires wherever they land and posing a major risk to structures built near wilderness. They can also linger behind a fire, smoldering in place for hours like lit cigarettes or incense sticks before reigniting and laying waste to buildings and forests that fire crews had saved.

According to the Insurance Institute for Business & Home Safety (IBHS), up to 90 percent of homes and buildings ignited in a wildfire are lit by embers. Dry, hot conditions, lightning strikes, and violent winds—like those blowing through the tinder-dry West right now—exacerbate the risk.

“Embers are tricky,” says O’Meara, who was recently deployed to fight the still-burning Sequoia Complex Fire in Sequoia National Park. “They ‘hide,’ if you will. They go up in the air with the convection, with the heat. But then as that heat goes away, or they’re heavier than the convection, they come down. And all bets are off when the wind is blowing, and it’s taking those embers two miles away from you. They will land anywhere and everywhere.”

When thousands of embers cluster together, it’s called an ember attack. If they land on gravel or a wet surface, they’ll eventually burn out. But if they land on debris in roof gutters or on other flammable material—mulch, plants, dry leaves, deck furniture, or a cluster of other embers—they can generate enough radiative heat to set a house ablaze. If that house is close to another house, a domino effect can ensue. Within hours a neighborhood or subdivision can be a charred ruin.

O’Meara says the most dangerous situations occur when embers start cascading down into densely built neighborhoods that abut wildlands, blown by strong, dry downslope winds like the Santa Anas that buffet Southern California in the fall.

“When someone there leaves a window open, just one of those embers—it only takes one—can get on a drape,” he says. “Or it can burn through the screen on their door. Or it gets the patio furniture going. And then you have an exterior fire, with a tremendous amount of heat coming off of this house. At that point the two next to it are going to be a problem. Then the three across the street become a problem. It compounds itself, and it gets bigger and bigger.”

The amount of heat contained in embers varies widely, and their erratic spread adds a major—sometimes lethal—wrinkle to firefighting, making it difficult to know where to position crews and which structures can be saved.

The importance of embers has long been clear to firefighters and scientists, but their ephemeral nature and unpredictability make them difficult to measure and quantify in the field. In the last several years, more scientists have begun to study them in lab settings. But that can be tricky too. “Ember combustion is highly random by nature,” says Nicolas Bouvet, a researcher at the National Institutes of Standards and Technology (NIST). So it requires numerous trials in the lab to draw strong conclusions about how an ember will burn based on its material and shape, the wind conditions, and other variables.

Learning how much heat embers can generate is key, says Michael Gollner, a mechanical-engineering professor at the University of California, Berkeley, who studies the physics of ember ignition. “If we know the magnitude and duration of heating that can come from embers,” he says, “we can choose materials or geometries that won’t ignite under these conditions and keep buildings from burning down.”

He points out that ignition-resistance gives firefighters crucial time to protect nearby buildings. “If you can ‘harden’ your community so that 90 percent of structures don’t ignite, suddenly firefighters can have an outsize impact, and perhaps save the entire community.”

Gollner’s experiments involve igniting a small pile of wood, bark, or other fuel and allowing it to burn down to a glowing pile, then placing it atop sensors in a small wind tunnel. “We measure the heating rate from this pile to different fuels (such as a decking board or bed of pine needles).”

His studies quantify the heating rate of different types of embers, pile sizes, and wind speeds over a range of building materials and geometries. Repeating those experiments with thermal sensors embedded in a non-flammable surface allows “us to separate the influence of the embers from what it lands on. This way, we can try to predict what will happen if embers land on many different building materials we didn’t even study.” Which in turn helps engineers design materials that are ignition-proof at those heating rates.

Gone with the wind

Another crucial factor is figuring out how embers spread. David Blunck, a mechanical-engineering professor at Oregon State University, studies the physics of ember generation through a mix of lab work, field studies, and computer modeling. Comparing results gleaned under controlled circumstances with data generated outdoors, via prescribed burns, he can measure when embers form, and at what size.

One of Blunck’s projects looked at how different types of live trees release embers—which ones burn the fastest, which produce the most embers, and which send embers the farthest. The findings can help fire managers locate areas that are most vulnerable to spot fires, and help landowners decide which species to plant in places prone to blazes.

Blunck has also looked at the effects of fire retardants on ember generation. Trees coated in fire retardant tend to produce bigger embers, but with lower energy—under some conditions, not enough energy to start a new fire.

At NIST, Bouvet and his colleagues are using 3-D tracking and ember reconstructions to develop an “emberometer,” which will help rank how severe an ember attack can be—based on topography, weather, and fuel type—and provide guidance on building codes and standards.

Which is where the IBHS Research Center comes in. The state-of-the-art, $40-million facility in Chester County, South Carolina, uses 350-horsepower fans to re-create ember attacks, which help scientists understand how to build and retrofit structures to be more ember-resistant. On March 6, 2019, for example, a full-size duplex home was showered with embers in the IBHS test chamber.

The results were stark to behold: In 10-minutes the traditional side of the house was on fire. The fire-resistant side didn’t spark at all. That may sound intuitive, but many of the buildings that burned last year in California’s Woolsey Fire, which consumed 1,500 structures in Los Angeles and Ventura counties, were ignited by embers that landed on combustible building materials and landscaping.

Roy Wright, president and CEO of the nonprofit IBHS, says the takeaways are that maintenance and materials matter. Home and business owners, he says, should make sure there is five feet of combustion-free space around their structures, and should use fire-resistant materials (for roofing, siding, windows, and doors) when building or retrofitting a structure. Roofs made with asphalt shingles or clay (or concrete) tiles, for instance, are the most likely to be fire-resistant. For siding materials, brick, stone, stucco, or fiber cement board will do the trick. And double-pane tempered glass, with the screen in place, is always a good bet when it comes to windows.

According to research by the Montana-based land-management firm Headwaters Economics and IBHS, the cost of using fire-resistant building materials is only slightly more expensive—and sometimes less expensive—than using standard materials. The aesthetics don’t need to suffer either. In addition to traditional brick, stucco, and stone—all of which are ember-resistant—siding materials that look like wood but are made mostly of cement have become popular.

For property owners everywhere, being ember-aware is more crucial than ever. Though Western wildfires are grabbing the headlines, conflagrations can occur anywhere. Robert Ingram, a retired fire battalion chief on Long Island, notes that climate change could bring fire threats to more places. People living near forest areas all need to consult ember-awareness checklists. “Even in the short timeframe of a weekend,” he says, “they can do a tremendous amount to protect themselves.”

For instance, he says, “Keep dry brush at least a hundred feet from your home. Don’t allow pine needles to accumulate in gutters or up on the roof. Try not to use wooden shingles. Don’t have wooden vents attached to the house. Park your car away from the house—or, if you’re going to bring your car into the garage, back it in so that if you have to go, you can open the door and just go. Really be aware of how to protect yourself.”

After all, he says, “These conditions … are not going to go away. So if [people are] going to have homes and build them in these areas, they have to know how to protect them.”