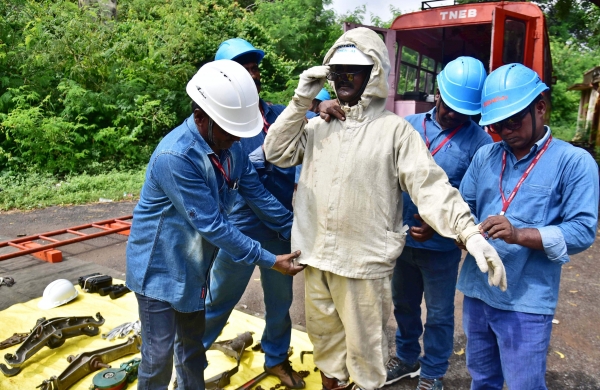 CHENNAI: Last month, a portion of the main electricity line which feeds power to Thirunindravur sub-station needed to be replaced immediately. But, officials could not cut off supply to repair the line. Had they done so, supply to surrounding six villages and two main sub-stations would have been disrupted for about five hours. This is when a special team of 15 hot-line members quickly arrived at the spot.

Those part of the hot-line team are trained to work on live wires, sometimes wires that carry as much as 440 Kilo Volt hovering on 120 feet tall towers. These men take an immense risk by working with live wires so that the city does not have to face frequent power cuts. Though the team has been operating in the State since 1957, they get little credit for the dangerous work they handle every day.

“Though we have done hundreds of such operations, the one at Thirunindravur was especially tricky. Thiruvallur and Kakalur sub-stations were directly connected to this line. Had we cut off supply, six villages in the neighbourhood would not have had power for five hours,” said Nagaraj G, an assistant executive engineer who oversaw the operation.

Saravanan S, a wireman who recently joined the team carried out this particular repair. “It was a daunting task. But it was more of an adventure for me. I had to climb the tower which was almost 100 feet from the ground to replace the termination clamp that had worn out. My family understands the risk behind the job, but are very proud of my efforts,” said Saravanan, who works part of the distribution team at Korattur sub-station when he is not needed by the special team.

Out of 160 members in the State, 52 hot-line workers are available to carry out repairs on live wires in Chennai region. When damage is detected by the transmission arm of Tangedco, Tantrasco, a team of hot-line staff is sent to repair the defect. The workers who repair the damage then put on a special suit called the Faraday suit for protection.

Though this suit has prevented fatal accidents from happening. workers need to repair live wires from tall towers. This coupled with sudden climatic changes makes the job an extremely risky one. “Though we carry out such repairs on live wires only during summer, sometimes it starts raining suddenly. Also, the suit is not an insulator. As it is made of stainless steel, the suit becomes a better conductor of current instead of the human body. Even with all safety measures in place, the entire process involves high risk,” explained a senior Tangedco official.

In September, a main insulating line had to be replaced in a sub-station in North Chennai. Due to high pollution, wires corrode faster here. This operation was one of the most difficult ones, explained Nagaraj. The hot-line staff had to make sure that the 230KV line does not suspend in mid-air and at the same time replace the insulator. “If we had turned off the power supply in that line, power load would have increased in other lines. The risk of the other lines tripping was very high. Though this job is risky, it has been my ambition to be on this team,” said Raju S, a foreman part of the hot-line team.

Actrol leads the way with more expansion plans in 2020

On the issues: CNY candidates for Congress on police reform, ‘defund the police’ | Politics