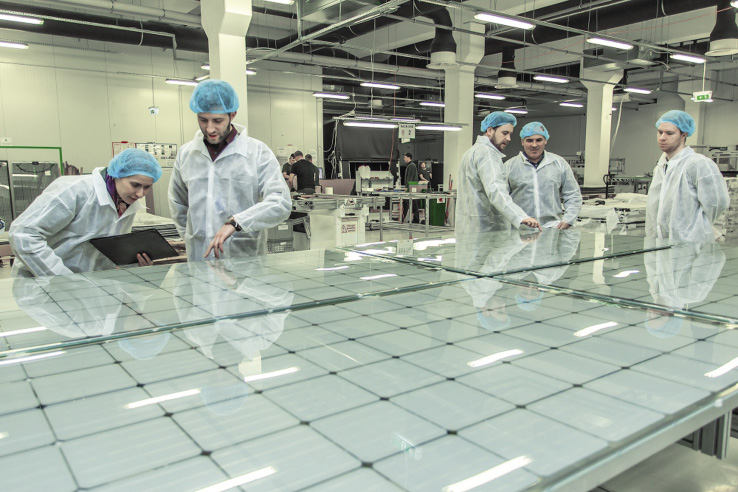 Professor Krishna Rajan – a materials informatics specialist in the School of Engineering and Applied Sciences at the University of Buffalo – focuses on understanding materials at the atomic and molecular scale. He says that the use of artificial intelligence has long been commonplace in his field.

“The use of AI methods in material sciences have now become part of the lexicon,” says Rajan. “In fact, these tools that were very complicated to use are getting easier and more acceptable as computers become more powerful. We work in areas to try to understand, if you throw it in a landfill, how these materials degrade.”

The International Renewable Energy Agency (IRENA) has estimated that more than 78 million tons of solar PV module waste will be in circulation by 2050. The shift to a more circular economy with regard to solar waste will therefore be key to successfully transitioning to a 100% renewable and sustainable economy in the years ahead.

Circular manufacturing has been the focus of the UP initiative’s Q3 2020 quarterly theme. We looked at if adopting circular approaches can create competitive edges and reap financial and reputational rewards, in addition to investigating what is already being done in the solar industry. Discover all our coverage.

The quest to find new materials that can replace toxic, unsafe materials such as lead is a major challenge for scientists. But some materials – ultra-pure nano-structured silicon, for example – can be recovered from PV panels via practical means for use in EV batteries.

That said, new materials are contributing to improved solar efficiency at an increasingly fast rate. As Rajan explains, in the early decades of the PV industry, core materials for solar cell and module production remained relatively constant. People may have modified engineering parameters, he acknowledges, but the basic materials and the foundation essentially didn’t change. “In the last 20 years, that’s not the case. The rate at which new devices and new materials to make those devices have appeared has increased very rapidly,” he observes.

In July, the U.S. National Renewable Energy Laboratory (NREL) published a new report on end-of-life management for PV modules. The researchers looked at recycling of crystalline silicon and recommended further efforts to find ways to reduce environmental impacts and recycling costs, while still recovering as much material from panels as possible.

Solar panels nearing the end of their average 20-year lifespans in turn-of-the-century PV projects present a significant pollution and health threat. But the need to close the loop in the energy cycle and safely recycle or dispose of end-of-life PV products is also an opportunity.

Reuse, recovery and value-added repurposing is an alternative to recycling, but the path to accomplishing this is complex and multifaceted. The work of scientists such as Mahdokht Shaibani, a materials researcher at Monash University in Australia, sheds light on ways to potentially reduce the use of harmful materials such as lead, while also identifying new ways to recover copper, silver, and silicon from PV modules for reuse and repurposing in other products.

“The solar-grade silicon from PV waste can not only be recovered for second-use applications in solar panels, but it can be advantageously repurposed for value-added application in the anode of the 3b generation of Lithium-ion batteries,” says Shaibani. “With an ultra-high capacity to hold lithium (in theory as much as ten times the capacity for a given weight compared to the traditional graphite), silicon has been an ideal candidate to explore as a new anode.”

Industrial-grade silicon averages about $1-2/kg, but ultra-pure nano-sized silicon – which is suitable for battery applications – can cost up to $20,000/kg. This is of course not competitive, given that currently used graphite electrodes only cost around $10-20 per kilogram. So it’s clearly important to find cheaper sources of high-purity silicon, but Shaibani argues that it is also critical to identify methodologies to support the price-competitive synthesis of “battery-grade” silicon.

A typical crystalline silicon (c-Si) PV module contains about 5% silicon, which is valuable, given its high purity. But most approaches to recovering it from PV waste involve hydrofluoric acid, a potent contact poison requiring careful handling and disposal. Shaibani, in cooperation with colleagues under Frederic Boschini at the University of Liege in Belgium, have have identified a substitute for hydrofluoric acid in the extraction of ultra-pure, nano-structured silicon from solar panels.

However, even when a material is identified as potentially promising, researchers and manufacturers still face enormous challenges. Lithuanian solar panel maker SoliTek, for example, is taking a multifaceted approach to applying circular principles to its production operations, via digitalization, new design methods, and research on alternative materials for solar panels, to reduce toxic constituents and facilitate better module recycling.

But even with such clear objectives, the path forward is fraught with challenges. One important area of research for SoliTek has been the potential use of bismuth to replace lead in soldered interconnections. Bismuth initially showed potential here, but SoliTek’s research findings thus far have raised further questions about sustainability and issues related to recycling. Its hunt for a lead-free alternative therefore continues.

Such examples underscore the scale of the challenge for materials researchers. As Rajan notes, a solar PV module itself is a complicated blend of materials. Scientists continue to discover and design all kinds of chemistries that can have great potential as solar energy conversion systems. And with about 80 elements in the periodic table – forget about the radioactive ones, obviously – researchers have a vast range of options to play with. The possibilities appear almost endless, but the clock is also ticking.

“In the area of medical sciences we always see the need to come up with a solution fast. Physical sciences have been slower on picking up that concept. But I think when we’re dealing with things like solar and environmental issues, we can’t wait 50 years for a solution,” says Rajan. “We need to apply this logic of accelerated discovery.”

Scientists can take several different approaches to tackling these problems. One is to try to determine the chemical inventory associated with a PV module. This has led to the creation of comprehensive lists in the United States and Europe of all the chemical ingredients that are used to make a solar panel – from the components to the materials. Scales of information serve as useful guides for companies trying to select safer or more sustainable materials.

The other approach involves the consideration of what makes a material toxic. A manufacturer may wish to avoid lead, but that in itself says nothing about about what actually makes it undesirable, says Rajan. And as SoliTek’s experience with bismuth shows, the search for suitable replacement becomes a process of trial and error – a slow and arduous process. “This is where the field is right now. It’s been like that for years.”

“And that’s why we’re standing back and saying ‘wait a minute’ – what we’re doing is saying that replacement may not just be one element. In other words, it may be a combination of elements,” Rajan says.

But materials scientists have a lot of levers to control. And they need to consider all of them holistically to find materials that provide the desired functionality in the PV sector.

“Especially in the environmental area, we tend to look at everything purely from the label of chemistry – is it lead, is it bismuth, is it tin? But what happens when you take that lead, bismuth, or tin and put it in a perovskite cell, a zillion other things happen. And it’s from how the atoms sit, what form they sit in, what angle they sit at,” says Rajan. “These may sound like very academic, esoteric questions, but they have huge impacts on stability, performance, environmental hazards.”

And because there are multiple parameters involved in the search for new materials, AI is a necessity – especially when the aim is to actually design materials for new applications from the ground up. The prediction of potential environmental issues is extremely complicated, after all.

“To do that we have to really get into some very advanced computational methods,” Rajan explains. “And that is where AI comes in, because it has to look at fine networks of information correlations that can give us a guide that doesn’t require us to do trial and error work.”

It’s “statistics on steroids” and it’s widely used by material researchers. AI helps scientists to get into areas of mathematics that are evolving, in relative terms, and find connections that leapfrog what they see in the laboratory to what the performance would be in service.

“And what would the performance be when it gets into a landfill – how do you predict that? It’s not a trivial question. And just having data and statistics alone over time is not a realistic way,” argues Rajan. “But the challenge is the barriers – it’s not lack of intention. The barriers are that there are so many variables and constraints. Even if you find the right chemistry, making it, synthesizing it, figuring out what its long-term impacts are, these are very complex problems.”

And even then, there are more challenges to come. As Rajan explains, nature doesn’t allow every chemistry to combine, or even produce materials that are stable. But even by applying advanced computational methods to such challenges, researchers still need to figure out the fastest way to make connections and answer complicated questions, says Rajan.

“That’s where it becomes a data problem. It’s not just having large amounts of data – you have to navigate connections between data, of characteristics of the materials, characteristics of the atomic scale, crystalline structure scale, the fabrication scale. All of which is very messy and noisy,” he explains.

Rajan and his colleagues have partnered with what he calls “nontraditional alliances” – that is, not just other universities. They collaborate with nongovernmental organizations and other groups who actually work on the front lines of environmental sciences and protection. Their shared aim is to determine what trends can be linked to contribute to policy decisions regarding the use of safer chemicals and materials.

“Finding the right partner with industry is critical,” he says. “You need industry and companies that are willing to share information.”

This is how scientists can truly expedite efforts to find a new material, and then quickly modify it while assessing its long-term environmental impact. The circular economy concept has been around for a long time. The problem, as Rajan sees it, is that the circle is extremely large.

“If we really want to make advances in getting the circular economy to have a good impact, we need to compress that life cycle,” Rajan concludes. “So we don’t have to wait 10 years to figure out whether something is bad and then figure out how to solve the problem.”