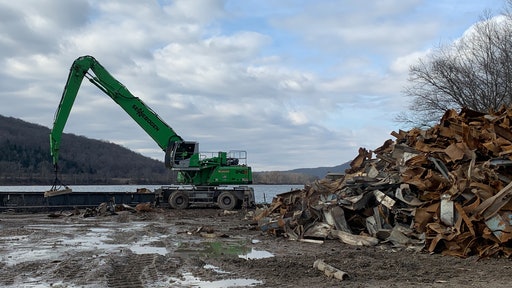 A Sennebogen 840 M was used on a power plant project in Ohio, where barge loading operations required a heavier machine with longer reach.

Detroit-based Adamo Group has been a leader in the demolition industry for over 50 years, taking on large decommissioning projects throughout the United States and Canada. The contractor was accustomed to using specially equipped long-reach excavators to tear down structures and then machines with grapples followed up to pick through and load the debris for disposal.

In 2004, Adamo Group first experimented with attaching a magnet to an excavator to pull rebar and other ferrous scrap from the piles of rubble.

“We were floored by the amount of scrap we were recovering,” recalls Richard Adamo, who is the third-generation president of the family-owned company. At the time, he had a team working on an automotive factory project, with a large volume of metal in the structures.

“Look at the recovery we can get – all this material we’ve been sending to the landfill, picked as clean as you can get it,” he commented. In one job, metal recovery added significantly in revenue to Adamo’s bottom line.

A short time later, Adamo Group took advantage of an opportunity to acquire a used material handler and decided to “give it a shot” with the magnet. The machine demonstrated the advantages of replacing excavators with purpose-built material handlers, but maintaining it proved to be problematic.

Then equipment dealer Alta Equipment connected Adamo with its Sennebogen line-up of material handlers. “I attended an open house at Alta and I saw an 821 M on their lot,” Adamo muses. “I thought ‘That’s really cool. I’m really interested in that machine. It’s a good little unit, very mobile; it could suit a specific need.”

With projects scattered across the country, the ability to transport equipment efficiently is a key point in planning for Adamo Group. Larger sites also call for machines that travel quickly between work zones under their own power. And, as in any major project, reliability through long operating shifts is essential to meet deadlines.

Adamo purchased an 825 M soon after seeing his first 821, then larger 830 M models were added for new projects. “I’m pretty critical of equipment,” he says. “Our excavators were challenging at times to move. The 825 is night and day better.”

Each of these models, up to the 830, can simply drive themselves on and off a lowboy to transport with greater ease. 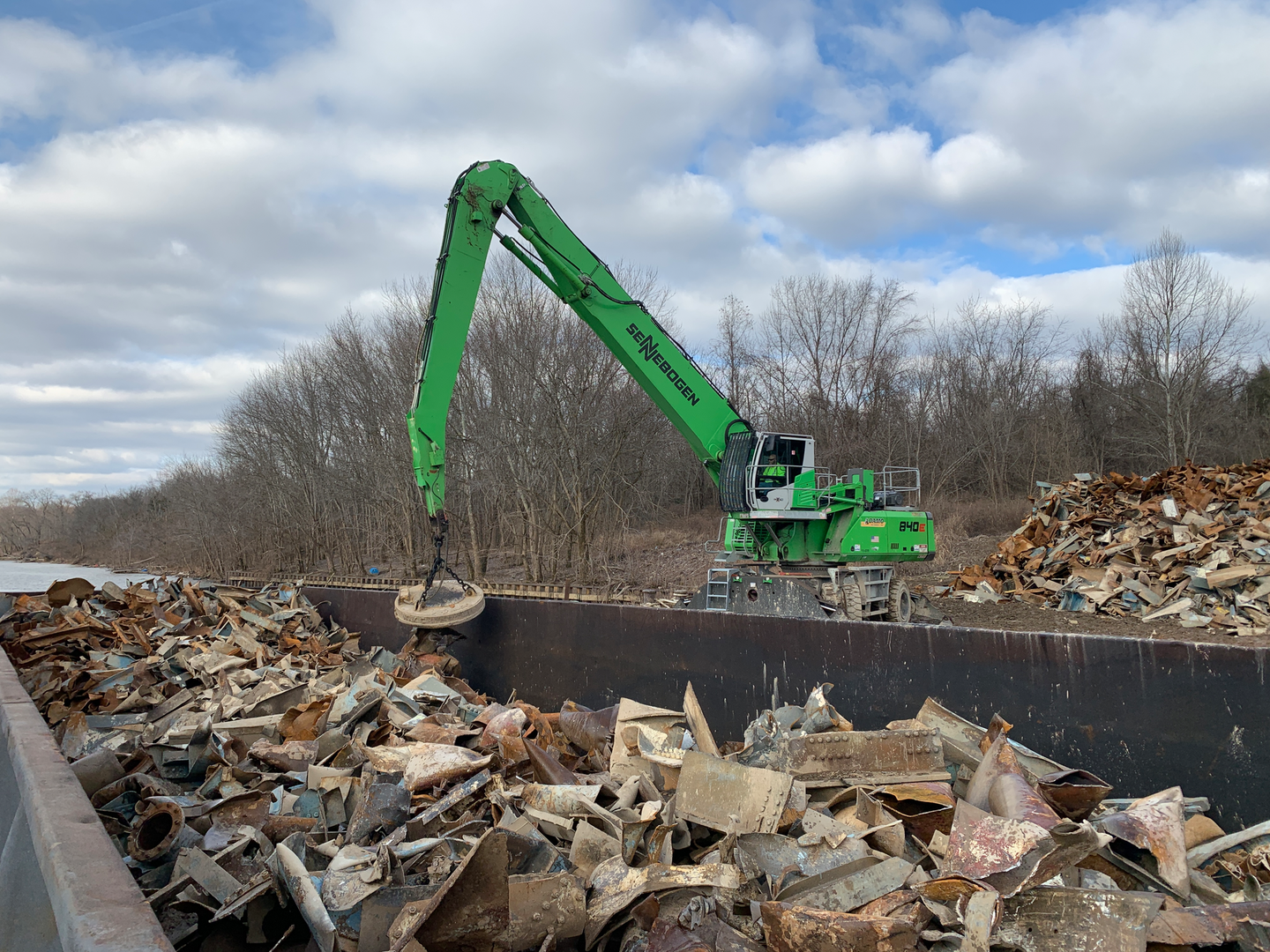 Adamo Group uses its Sennebogen material handlers with a magnet to pull rebar and other ferrous scrap from the piles of rubble, reducing landfilled material and adding an additional revenue stream.SennebogenThis mobility proved especially critical during renewal efforts around the City of Detroit. Adamo Group came to be recognized by the National Demolition Association for its work in Detroit to clear its blight of abandoned homes. At the peak of the program, the contractor took down over 1,400 homes in less than three months.

“Each house is a job. It calls for significant resources for continual management,” says Adamo. “We had to move quickly and be able to get it done with no complaints from the neighbors.”

The fleet was expanded recently to include even larger material handlers, including an 840 M acquired for a power plant project in Ohio, where barge loading operations required a heavier machine with longer reach.

The laydown area is located near the barge facility, which is a considerable distance from the demolished structures on the site. Using a 67-in. lifting magnet, the 840 loads off-road trucks with the recovered material, which delivers the scrap to the laydown area. Once enough material is accumulated, the 840 is driven to the river to fill the barge.

According to Adamo, his operators appreciate the visibility they get with the elevating Maxcab, which enables them to look into the barges. “I always get good feedback from the operators. They just raise the cab and go to work. The machine doesn’t stop.”

When it’s not loading trucks, the 840 continues “maging out” the debris piles.

These maging applications get unexpected kudos from landfill operators. As Adamo explains, the concrete material from projects is commonly used as “hard fill” to cover the service roads in landfill sites. However, scrap metals mixed into the waste frequently takes a toll in flat tires for trucks on those roadways. Since Adamo Group began cleaning metals from the debris it ships out, complaints about flats have gone down appreciably.

“Our biggest accomplishment, really, is segregating the metal to recycle,” says Adamo. “We were among the first to use the magnets for sweeping and cleaning the piles. We are now getting paid for material that otherwise would have been a cost for tipping fees at the dump.”

PDP moving towards procurement after doubling in size

Quality in, quality out – Recycling Today