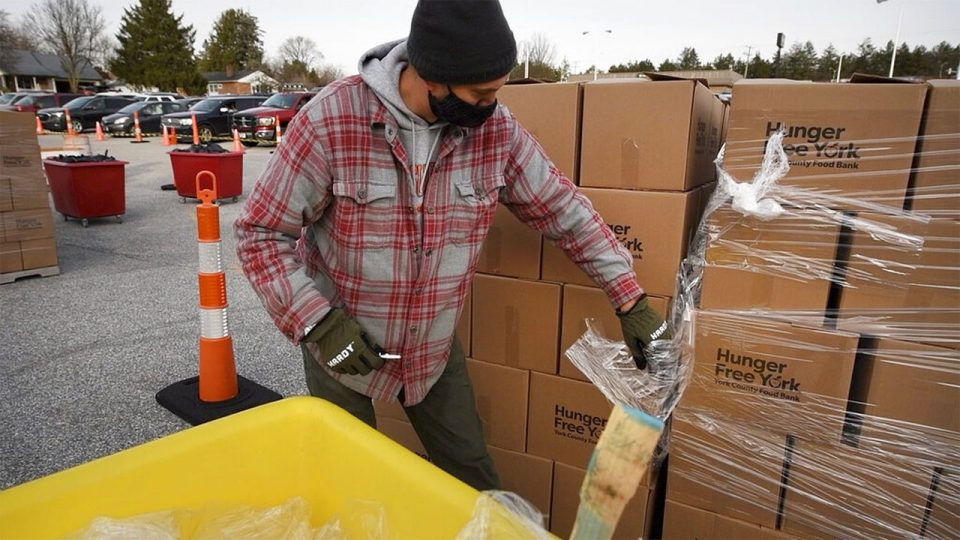 The cars, pickup trucks and SUVs trickled in, lining up in rows set apart by traffic cones in the parking lot of the suburban shopping center.

Single people, couples and families occupied themselves while they waited, some glued to their phones, others doing word-find or crossword puzzles, and yet others napping, reclined in the driver’s seats of their cars.

By the end of the day, as many as 1,100 cars would stream through the parking lot, their trunk lids and tailgates open, ready to accept the food that would sustain the occupants and their families.

For those waiting this freezing December afternoon, it was a lifeline, it was what kept them and their families from going hungry and having to make the difficult choice between keeping a roof over their head, paying to keep the heat on or putting dinner on the table.

Many of those lining up have never been there before, have never had to ask for help. The York County Food Bank’s weekly food distribution has expanded as exponentially as the pandemic and the economic pain it has inflicted.

Brenda Gruver, a 63-year-old laid-off truck driver from Dover, was near the front of the line, having arrived at about 2:30 p.m. She whiled away the time behind the wheel of her Dodge Ram pickup truck, the window rolled down despite the cold.

Brenda Gruver, 64, of Dover was a truck driver who was laid off when the pandemic hit saying,’I don’t like it, I never had to my whole life,’ when asked about receiving assistance at the The York County Food Bank Emergency Food Hub.

She mused, and said, “This has been a terrible year.”

In a way, the shopping center just off the intersection of Haines Road and Mount Rose Avenue in suburban York is kind of symbolic of what’s happening. Once, it was a center of commerce, housing a Kmart and a Weis supermarket. Now, the supermarket is home to the Salvation Army’s Thrift Shop and the former Kmart serves as a distribution hub for the local food bank.

Inside, the cavernous former retail space is lined with pallets of food, everything from canned spaghetti sauce to green beans and Campbell’s cream of chicken soup. A line of commercial refrigerators and freezers runs from the front of the former store to the rear wall.

The food bank moved its distribution from its headquarters on West Princess Street in the city to the suburbs in March, as demand for food exploded as the pandemic seized the community and led to widespread layoffs.

It has become a symbol of hope during what may seem to a lot of people a hopeless time, a time when jobs disappeared and have been slow to reappear. For largely blue-collar York County, that means a lot of families that were living paycheck-to-paycheck have fallen into what’s called food insecurity. Yet, hunger knows no bounds. Some people who had previously volunteered with or donated to the food bank, middle-class people, never envisioned that, one day, they would have to wait in line for food.

Alissa Mummer, volunteer coordinator at the The York County Food Bank Emergency Food Hub says that the center has experienced an ‘uptick’ in need over the holiday.

In other words, a lot of people are going hungry.

Food insecurity has exploded, with as many as 50 million Americans needing help to put food on the table, a 60 percent increase from pre-COVID times, according to the hunger relief organization Feeding America. In York County, for instance, 13.3 percent of the county’s households are suffering from food insecurity, the organization estimates. Before the pandemic, that figure was 9.1 percent.

“The COVID-19 crisis has dealt a swift blow to the economic health of individuals and communities across the country, and the effects have the potential to be long-term,” Feeding America concluded in a report released in October. “It took ten years for food insecurity rates to return to pre-Great Recession levels. For now, with no immediate end to the crisis in sight, demand for charitable food assistance is expected to remain at elevated levels for the foreseeable future.”

Finding a way to help

About an hour and a half before the distribution was to begin, Ryan White worked preparing the harvest for the food bank’s clients, slicing the plastic wrap off pallets of pre-packaged dry goods and perishables.

White has been volunteering since March, when he and his 17-year-old stepdaughter, Maddison Perring, showed up at the distribution center to help. White is recently retired, at 43, from a career in finance, commuting for 20 years from York to New York.

“I didn’t envision I’d be doing this in retirement,” White said. “My wife said I needed something to do and had to get out of the house.”

Ryan White, who retired early from a finance job in New York City, has been volunteering at the The York County Food Bank Emergency Food Hub in Springettsbury Township since the pandemic hit last March.

Seeing the need, he said, “I felt we should try and do something to help.”

His first day was March 24, just as the weekly distribution was beginning to ramp up. In those early weeks, it wasn’t as organized, and often the line of cars would wind through the adjacent neighborhood for a mile or so to East Market Street. The township police weren’t thrilled and met with the food bank staff to come up with a way to handle the traffic without disrupting the surrounding neighborhood. Now, almost nine months into the mass distribution, the system works. Volunteers control traffic and once the distribution begins, it works smoothly and efficiently — surprising considering the number of cars in the queue.

As the cars stream through the two serving lines, White assists the other volunteers, including Maddison and a group of her classmates from York Suburban High School, loading groceries into cars. His workday can stretch to five hours.

“When you go home, you’ll be pretty tired,” he said. “But you’ll feel really good about what you’re doing.”

Gruver has held a job steadily since she was 15. “I never had trouble finding work,” she said, “until now.”

She did warehouse work and drove box trucks for years until, in 2008, she earned her commercial driver’s license. “I thought it was time to go to the big stuff,” she said.

She drove over-the-road for years. She figures she has driven to every state and big city in the continental United States. She enjoyed it. “It was like being on a paid vacation,” she said.

A few years back, she decided she wanted to stay closer to home and signed on with a local trucking company, making local deliveries, anything, she said, “where I could get back home the same day.”

The pandemic hit in March, and in early April she was laid off. With so many businesses closed, she said, there simply wasn’t enough work.

She collected unemployment, including the federal $600-a-week benefit that was part of the initial pandemic relief package, and looked for work. There was none to be found. She did OK until the federal supplement to unemployment expired at the end of July.

Now, she’s on extended unemployment insurance, which doesn’t cut it.

It was hard for her to go to the food bank for help, she said. She’d always been self-reliant, and it was difficult to admit to herself that she needed some help.

The horizon is a long way off

“A lot of the people here never thought they’d be in this position,” said Aylssa Mummert, the food bank’s volunteer coordinator. “That’s the reason we’re here.”

It’s getting worse as the pandemic enters what’s predicted to be a dark winter.

“The past couple of weeks,” she said, “there’s been an uptick in the number of people we’re serving.”

And even though vaccines seem on the horizon, that horizon seems a long way off.

The operation works because of its volunteers, Mummert said. About 150 volunteers descend on the distribution center every week to help hand out food to those in need. “Our volunteers have been very loyal,” Mummert said.

Among them is Rodney Markle, a 66-year-old retiree from Armstrong Industries in Lancaster County. He’d been volunteering with the food bank since the beginning of the pandemic, when the organization began operating a drive-through distribution on Princess Street. “It got to be overwhelming there,” he said, with cars lining up through the city.

He’s heard so many stories. “One woman was in tears,” he said. “She said she had no food and didn’t know where to go. Another said she couldn’t take any cold food because she was living under a bridge.”

He said, “People just feel so helpless. The best thing about it is people really appreciate this.”

Donald Strickler, 72, of Glen Rock is a Marine waiting in line who was in the thick of combat in the Vietnam War. He said that he has worked since he was 13 years old and the pandemic was the first time he ever “had to do anything,” referring to receiving assistance at the The York County Food Bank Emergency Food Hub.

Waiting his turn in line in his Ford F-150, Donald Strickler killed time doing a find-the-word puzzle. He’s 72 years old, a Marine Corps veteran who served in Vietnam from 1967 to 1968 and now lives with his wife in Glen Rock in southern York County.

He had worked since he was 13 years old, at one point holding down two full-time jobs “just to keep my home.” Now, he said, he and his wife get by on Social Security and a very small pension.

Over the years, he said, “We’ve had some tough times, but nothing like this.”

It shouldn’t be this hard. “I was a hard-working person,” he said. “You work all your life, and you can’t make it.”

It was difficult for him to come to the food bank for help.

“It kind of irritated me at first, like I had to get a hand-out,” he said. “I’m not like that. I always helped others, and I could use a little bit of help now. That’s why I’m here.”