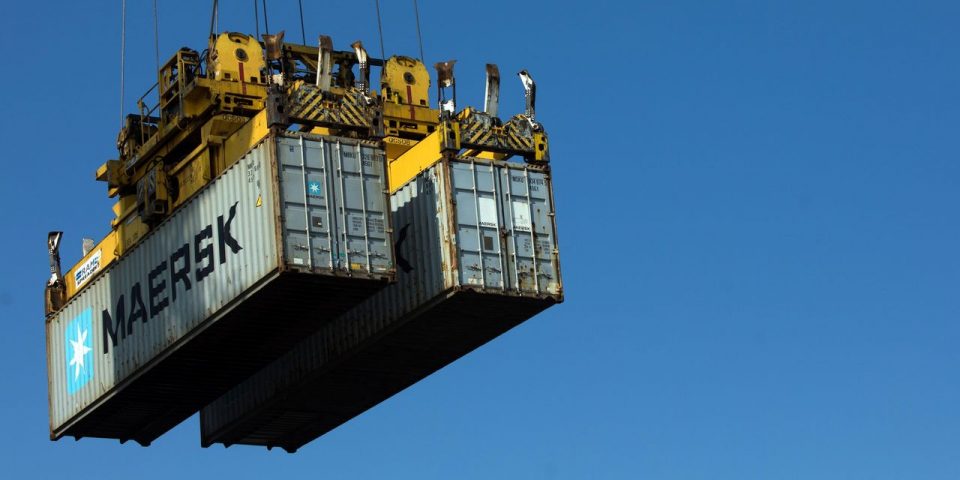 A.P. Moeller-Maersk A/S lifted its full-year guidance Tuesday after noting a faster-than-expected rebound in shipping volumes and freight rates, but cautioned that it will take a $100 million restructuring charge in the third quarter to cover the costs of cutting 2,000 jobs.

Maersk said full-year earnings before interest, tax, depreciation and amortization is now expected to be between $7.5 billion and $8 billion before restructuring and integration costs, from previous guidance of $6 billion to $7 billion.

The Danish shipping company prereleased third-quarter revenue of $9.9 billion and Ebitda before restructuring and integration costs of $2.4 billion. Analysts polled by FactSet had expected revenue of $9.87 billion.

Volumes in the company’s main ocean unit declined by around 3% in the third quarter compared with the previous year, which is slightly better than the mid-single-digit contraction seen by the company.

“Volumes have rebounded faster than expected, our cost have remained well under control, freight rates have increased due to strong demand and we are growing earnings rapidly in Logistics & Services,” said Chief Executive Soren Skou.

“The outlook for [the fourth quarter] is solid for the same reasons, and we are therefore able to upgrade our expectations for the full year.”

The company said shipping volumes fell 3% in the third quarter, less than the “mid single-digit contraction” it had earlier forecast. Maersk said it expects third-quarter revenue of $9.9 billion in line with analyst expectations of $9.87 billion.

Maersk’s shares jumped on the news, trading up 1.8% at 10,865 Danish kroner on the Copenhagen Stock Exchange.

The company is the world’s biggest ocean container line, with about 17% of the world’s capacity, according to maritime research group Alphaliner. The company has been under pressure from shareholders to complete a reorganization that began in 2016, when it split its shipping and logistics operations from its energy business.

Maersk didn’t give details about the job cuts Tuesday. It said last month that up to 27,000 staff, nearly a third of its global workforce of 80,000, could be affected by the restructuring. The Wall Street Journal reported, citing people familiar with the matter, that the job reductions could involve employees at Damco and Safmarine, operating units the company said last month would be integrated into the wider group.

Damco, which specializes in freight forwarding and logistics, employs around 2,000 people and Safmarine, a container operator that mostly serves Africa, employs about 1,000. The Journal reported that there may also be redundancies at Hamburg Süd, the German container line that Maersk bought in 2017 for $4 billion and that employs 4,500 people.

Maersk Line and other container ship operators sharply curtailed capacity at the onset of the coronavirus pandemic as widespread lockdowns aimed at slowing the spread of the virus weighed on trade.

Volumes began recovering in late May as lockdowns in many countries began easing and freight rates started surging as shipping demand began to outpace capacity. London-based Drewry Shipping Consultants Ltd. said its index of world-wide container freight rates for the week ending Oct. 8 was double the level of a year ago, and spot-market prices from Shanghai to Los Angeles had more than tripled from the same period last year.

Maersk said in August it tripled its second-quarter net profit to $427 million from $141 million a year earlier, strongly exceeding expectations.

Mr. Skou warned that prospects for next year are uncertain because of a potential resurgence in Covid-19 cases during the winter.

“The positive impact from stimulus packages may be less strong in 2021, potential new lockdowns will impact demand and the timing and the effectiveness of a potential vaccine will impact 2021,” he said.

Norway-based Fearnley Securities said in a report that Maersk’s outlook is favorable over the next two years, with current freight rates almost double what they were a year ago.

Write to Costas Paris at costas.paris@wsj.com and Dominic Chopping at dominic.chopping@wsj.com

Decision due on 152 factory-built Worthing flats

Why the future of flying is up in the air

Report shows how College Park has changed since 2011