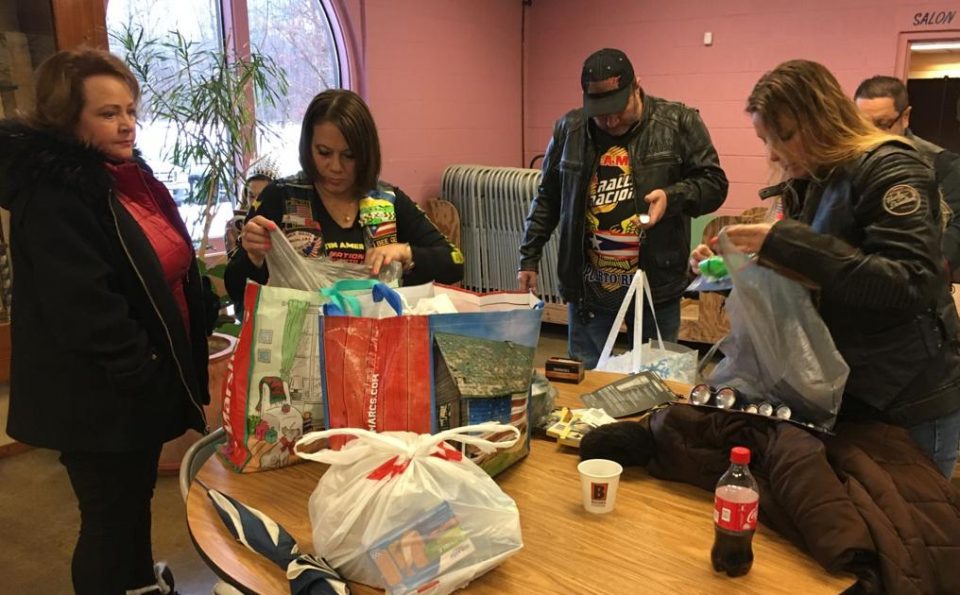 Lorain residents say they are ready to mobilize with prayers and deeds to help residents of Puerto Rico.

Two years after Hurricane Maria battered the island, Puerto Rico’s southern rural residents now are dealing with effects of earthquakes on Dec. 28 and Jan. 7, along with more than aftershocks recorded by mid-day Jan. 15.

With houses destroyed and aftershocks creating hazards inside buildings, island residents are sleeping outdoors in tents, with scarce food and water and spotty electricity and medical aid.

Lorain can help by preparing supplies to send to the island and by welcoming Puerto Rican families who come to the city, said Rey Carrion, Ward 6 councilman who represents part of South Lorain.

On Jan. 18, Carrion joined with Mayor Jack Bradley, the Lorain chapter of the Latin American Motorcycle Association and supporters to explain how Lorainites of all heritages can help those in need in Puerto Rico.

About 40 people came out to Sacred Heart Chapel in South Lorain to hear about conditions on the island. They also heard how Lorain might get an influx of families seeking a new start or temporary respite with family and friends.

Carrion this month announced a collection drive for supplies those left without shelter due to the earthquakes.

Those efforts will continue as Lorainites have made connections to get the supplies to Puerto Rico and to specific areas of need on the island.

Once the supplies are assembled into care packages, Yacylyn Velazqez confirmed Madera Trucking LLC of Lorain can move the items so they can be flown to the island.

Susan Santos, a Lorain native and Army veteran, now works for Delta Airlines based in Atlanta.

Santos said she and her colleagues can deliver relief materials to Puerto Rico. She added their philanthropic efforts are independent but not officially sponsored by the airline.

LAMA Lorain members have reached out to affiliates in Puerto Rico to deliver items to those who need them, said BeeGee Toro, president of the local club.

“Our mission is to send these packages to the LAMA chapters in Puerto Rico,” she said. “They are going to receive the packages and they are going to go through the island and pass out these items to the people in need.”

Carrion credited the efforts of Victoria and Michael Rosado, Lorainites who this month delayed their winter trip to the island so they could each pack another suitcase full of relief supplies.

“We would take more if we could,” said Victoria Rosado, who this month will make her ninth trip to Puerto Rico.

Lorain already is the city in Ohio for people of Puerto Rican heritage and the city could gain population due to residents leaving Puerto Rico to stay with family, said Victor Leandry, executive director of El Centro de Servicios Sociales Inc. The Spanish-language social service agency is at 2800 Pearl Ave., South Lorain.

Staff at El Centro and Lorain City Schools ramped up assistance two years ago when residents left Puerto Rico for Lorain due to the effects of Hurricane Maria, said Leandry and Marie I. Contreras-Deshuk, principal at Lorain’s Stevan Dohanos Elementary.

Housing is a challenge with the Lorain Metropolitan Housing Authority filled to capacity, Leandry said. People may stay with family, but that adds to the living expenses of a household and newcomers may not have have enough for a deposit for a new residence, he said.

In January, winter clothes are needed and El Centro will coordinate a voucher program with the Mercy Health Thrift Store, 1724 Henderson Drive, Lorain, for people to get needed items.

Two years ago, Contreras-Deshuk was principal at Washington Elementary.

The schools were ready to help children, Contreras-Deshuk said, but the journey took an emotional toll on parents. Although they were educated and had jobs and businesses in Puerto Rico, it was difficult to find work, she said.

Ohio doctors could not honor prescriptions from Puerto Rico, so families were in jeopardy of going weeks or months without medicine. Contreras-Deshuk praised Mercy Health for the Mercy Clinic at Washington Elementary, where families could get medical help easily.

The parish is asking for donations to support the rebuilding of Immaculate Conception Parish, a church badly damaged by an earthquake in Guayanilla, Puerto Rico, said Deacon Juan “Rocky” Ortiz.

City Hall staff will assist residents with any questions they may have if they relocate to the city.

Can the US end China’s control of the global supply chain?