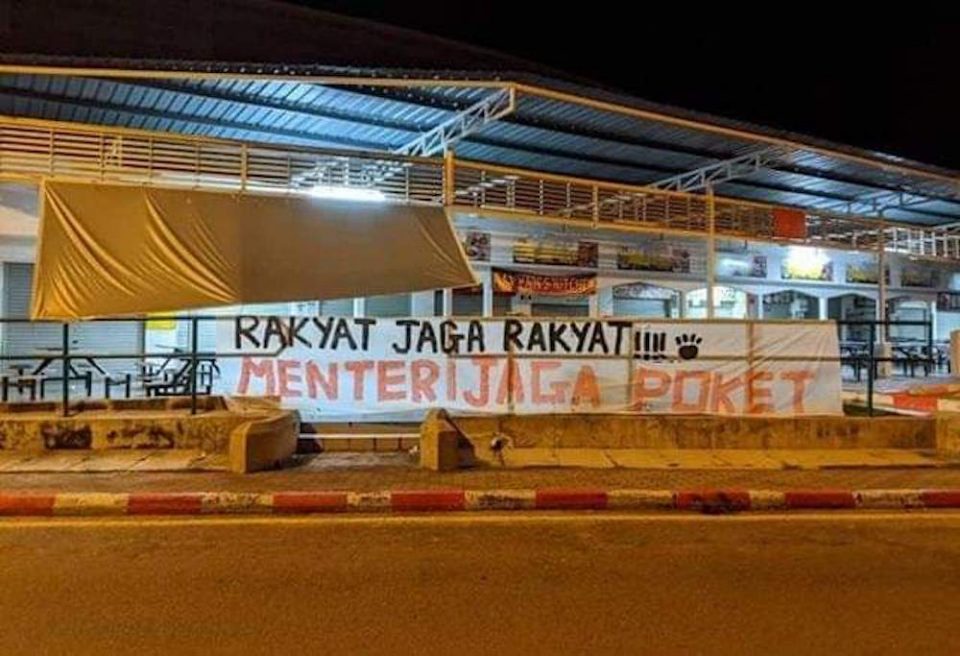 Unlike the early Covid-19 waves in Malaysia, when Malaysians generally placed their trust in the fresh Perikatan Nasional administration and obeyed strict movement restrictions, the current surge of Covid-19 cases has seen an unprecedented wave of public anger against not just the government, but the entire political class.

Many Malaysians blame the new Covid-19 wave – which appeared soon after health authorities started spotting cases with Sabah travel history turning up in other parts of the country since September 20 – on politicians across government and Opposition parties who had all joined the fractious Sabah state election campaign. The #KlusterMenteri joke turned into reality when 10 politicians, including a federal minister, contracted Covid-19.

The visible public anger – “rage” would not be an inaccurate term either – is understandable, especially since ordinary citizens are arrested daily for violating physical distancing rules, not wearing face masks, and visiting bars and nightclubs, among other offences, while politicians and lawmakers across the divide post daily photographs of themselves blatantly flouting Covid-19 standard operating procedures (SOPs) without consequence.

Shortly after the Sabah election, Malaysia took just three days to double the number of coronavirus cases from 317 infections reported on October 3 to 691 cases on October 6. Even at the height of the early outbreak, Malaysia only recorded 235 new Covid-19 cases on March 26. Having said that, I’m not sure if the current surge can be entirely attributed to the Sabah election.

I believe the virus has been lingering in the community in the peninsula even before the Sabah polls, but it simply wasn’t detected because we weren’t expanding testing to more people.

Malaysia is facing a crisis. But this crisis, unlike the time when Covid-19 first hit us, is now a public health problem exacerbated by deep public distrust against the political class, including policymakers and government officials who are responsible for making wide-ranging policies that affect the lives of every resident in Malaysia.

Before I highlight some shortcomings by the authorities in managing the pandemic, I will list my own lapses in following SOPs to the letter. Although I take care to wear a face mask whenever I leave my home, I previously used to go bare-faced whenever I was in the office, even though my other colleagues wore face coverings throughout the entire time they were at work.

When I visited Kota Kinabalu on September 19 for an event, I wore a face mask whenever I left my room, but I was without a mask during the outdoor dinner event that was probably attended by over 200 people. My dinner companions and I took care to sit in a corner, far away from everyone else. I also put my mask back on whenever I went to the buffet line. But for most of the time, as we chatted over wine and mingled with other guests, I was without a mask.

I also visited a campaign rally held outside a mamak restaurant in Kota Kinabalu. Although I sat inside the restaurant, away from the crowd, and wore a face mask throughout the event, I did take it off while I was drinking teh tarik. Throughout my visits, I wore a face mask whenever I sat in my friends’ cars, though not all the time.

I also didn’t don a face covering whenever I took pictures with people, mostly because I dream of a return to normalcy past this terrible nightmare of a year, when I can look back at these photographs and recall fond memories of friendship.

During my trip to Kota Kinabalu from September 19 to 21, the Sabah state capital only recorded fewer than five local Covid-19 cases at that time. On my return flight to KL, I didn’t take my face mask off even once during the 2.5-hour flight, even as a passenger two seats away from me doffed his while he was taking a nap.

I was dithering then if I should home quarantine for 14 days upon my September 21 return, since Kota Kinabalu only had a handful of coronavirus cases at that time. But I experienced a fever as soon as I got home and so, I isolated myself in my room away from my family, until I managed to get tested at Sungai Buloh Klinik Kesihatan on September 23 (not without some difficulty, as health officers were initially reluctant to test me because I wasn’t a close contact of a confirmed case).

I continued my home quarantine, eating meals in my room and avoiding my family, and was just released yesterday after testing negative twice for Covid-19. It turned out I was a close contact of a positive case after all, from my September 21 return flight, with health officers only informing me about it on September 25. If I hadn’t gotten a fever soon after I touched down, I’m not sure if I would have voluntarily quarantined myself at home for two weeks.

So I do understand if some people, especially those without symptoms, did not self-quarantine after returning from Sabah, especially those who came back before September 27 when testing was mandated at airports for Sabah arrivals.

Yesterday, Prime Minister Muhyiddin Yassin urged people not to point the finger at any party and to focus on handling the pandemic together instead. I understand his sentiments. Now, more than ever, Malaysians across race, class, and political allegiances need to join hands and manage the outbreak as a united people.

However, before this can happen, the government must own up to the mistakes it made. I’m emphasising the government because it’s the government that makes all the Covid-19 policies, not the Opposition. If Pakatan Harapan (PH) were still in Putrajaya and if they had made the same serious errors in judgment, I would say the same thing.

I believe the government made the wrong decision to implement mandatory testing for Sabah arrivals only from September 27, a day after the Sabah election, when thousands of people were moving throughout Sabah, as well as to-and-fro Sabah and the home states of campaigners and voters, during the two-week campaign.

The decision to only mandate home quarantine pending the results of Sabah arrivals’ first test, instead of an automatic 14-day quarantine, was also incomprehensible, as the incubation period for Covid-19 is a fortnight. Two lawmakers who returned from Sabah tested positive for Covid-19 on their second test taken five to eight days after their first test with a negative result.

The Sabah situation is completely different from previous red zones in other parts of the country, when inter-district travel in the latter only involved outstation workers or out-of-town residents.

Crucially, politicians were the key high-risk group in the Sabah election, “high-risk” meaning their day-to-day job involves meeting hundreds, or even thousands of people daily at various events.

Unlike previous by-elections in various constituencies, Sabah was a state election, the most contested one in decades at that, which meant politicians from all major parties travelled in droves from the peninsula and Sarawak to the Sabah campaign.

I understand the temptation to engage in schadenfreude when ministers and lawmakers – who freely ignore the rules they enforce on ordinary Malaysians – get infected with coronavirus. But we should refrain from taking savage pleasure in other people’s misery, even politicians, because Covid-19 is a horrible disease.

The #kitajagakita hashtag, once favoured in the early months of the outbreak, is now associated in distaste with the government. Malaysians have turned to #rakyatjagarakyat instead, fiercely defending the hashtag as one of the people and castigating any politician (even those from PH) who uses it. We have split further with #siswajagasiswa.

These divisions will only hurt us, now and in the long run. Public health measures in a disease outbreak cannot work with the stick alone, or in this case, the rotan. Voluntary compliance, high awareness of one’s personal health, and public education are the key to long-term behavioural change.

An apology from government officials for their slip-ups would go a long way in regaining public trust, instead of being defensive and portraying any public criticism as an attack on medical frontliners, who themselves suffer the brunt of bad public health policies.

Nobody expects the government to be perfect. We all make mistakes. Of course, these apologies must be accompanied by concrete action for the sake of accountability, like prosecuting and sacking ministers and other members of the federal or state administration for violating quarantine and other SOPs.

Once this is done, Opposition politicians should cease politicking (I use the word “politicking” to differentiate from constructive criticism). The government and Opposition should set aside their differences, just this time during the acute phase of the pandemic, and genuinely work together at solutions, especially since Opposition MPs represent almost half of constituencies.

Share power at both the federal and state level, across party and coalition. While Putrajaya should respect state and local jurisdiction, states and Sarawak — in particular — must stop behaving like separate countries who care only about their own people. Any public policy should be made from a bottom-up approach, through engagement with stakeholders and ordinary citizens, because people who participate in the process will be more invested in the success of these measures.

We must come together as a Malaysian society to face the greatest public health crisis of our time with compassion, cooperation, and civility. Resist the temptation to find an enemy – even the political elite – in the pandemic and remove the plank from our own eye, before looking at the speck in another person’s eye.

Boo Su-Lyn is CodeBlue editor-in-chief. She is a libertarian, or classical liberal, who believes in minimal state intervention in the economy and socio-political issues.

An Overview of the Texas Disaster Act, the Source of the State’s Coronavirus Response