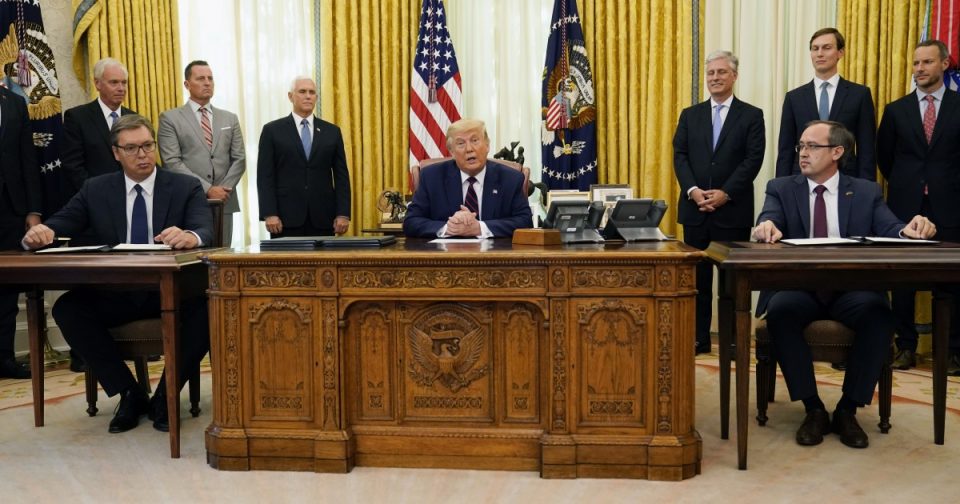 Leaders of Serbia and Kosovo visited the White House on Friday to sign a limited economic agreement that U.S. officials hope will begin a process of establishing full diplomatic relations between the once-warring neighbors.

But while President Trump called the deal “historic,” the modest two-page agreement, a copy of which was made available to The Times, mostly restated several still unfulfilled pledges to open rail, highway and limited air traffic between the two countries.

Serbian President Aleksandar Vucic and Kosovo Prime minister Avdullah Hoti sat briefly with Trump in the Oval Office. The U.S. is also a party to the pact.

“This is full economic normalization for all that the two parties can bring together,” Richard Grenell, U.S. special envoy to region, told reporters in a later briefing.

But one of the biggest issues — Serbia’s refusal to recognize Kosovo — was not dealt with except to establish a yearlong “freeze” on the matter.

Serbia’s president on Friday was keen to reject any notion that his Oval Office meeting meant he was recognizing his neighbor to the south.

“We have made a bilateral agreement with the United States, not with Kosovo,” Vucic told the Serbian press later Friday.

Kosovo, a largely Muslim, ethnic-Albanian former part of Yugoslavia, broke away from Serbia and declared its independence in 2008. That came nearly a decade after NATO bombed Serbian positions to end its war with Kosovo, which killed 13,000 people.

Kosovo had considerable international backing by nations that regarded Serbia as the aggressor, and its independence was quickly recognized by the United States and much of Europe. Serbia, however, and its backer, Russia, did not. To this day, Russia has blocked Kosovo’s entry into the United Nations.

U.S. policy has continued to support Kosovo, arguably the most pro-U.S. country in Europe, in part as a bulwark against Russia.

But the Trump administration, with Grenell as the president’s special envoy, has urged Kosovo and Serbia to put aside their political differences and agree on commerce and trade issues.

Experts, including many former U.S. officials who spent years working in the Balkans, say avoiding the politics is unrealistic because even basic bilateral trade cannot be easily conducted if one country does not recognize the other.

The strategy echoes Trump policy regarding the Israeli-Palestinian conflict. Trump’s “peace vision” for that region called on Palestinians to delay their political aspirations to statehood in exchange for financial rewards — something the Palestinians roundly rejected.

“Trump has not shown an iota of interest in the Balkans,” said Daniel Serwer, a scholar at the think tank Middle East Institute who served in the 1990s as a senior U.S. diplomat and envoy to parts of the former Yugoslavia as it fragmented into countries including Serbia, Kosovo and Bosnia. “But he is delighted to take credit for something where he can say no one has ever thought of it before.”

As a foreign policy triumph, Serwer added, “this will be a pretty hard one to sell.”

Trump congratulated himself in the Oval Office meeting for what he called forging peace between Serbia and Kosovo.

“After a violent and tragic history and years of failed negotiations, my administration proposed a new way of bridging the divide,” Trump said. “By focusing on job creation and economic growth, the two countries were able to reach a major breakthrough.”

President Clinton was an instrumental broker for peace in the Balkan region. He urged NATO intervention, both to stop the war in Bosnia in 1995 and the one in Kosovo that followed, in both cases acting against Serbia.

Grenell was the Trump administration’s ambassador to Germany, where he alienated the government of Chancellor Angela Merkel with a brash style and was criticized for appearing to support right-wing nationalist political organizations there and elsewhere in Europe.

Grenell briefly served as Trump’s acting director of national intelligence, and now continues only as special envoy to Serbia and Kosovo.

The main beneficiary of Friday’s deal appeared to be Israel. Trump’s son-in-law Jared Kushner announced that Kosovo agreed to recognize Israel, and Serbia agreed to move its embassy from Tel Aviv to Jerusalem.

Kushner portrayed Kosovo’s decision as a victory in getting Muslim-majority countries to recognize Israel. Last month, Trump announced a possible deal between Israel and the United Arab Emirates, which could become only the third Arab nation to recognized Israel.

If You’re Excited for Rune Factory 5, Play My Time at Portia