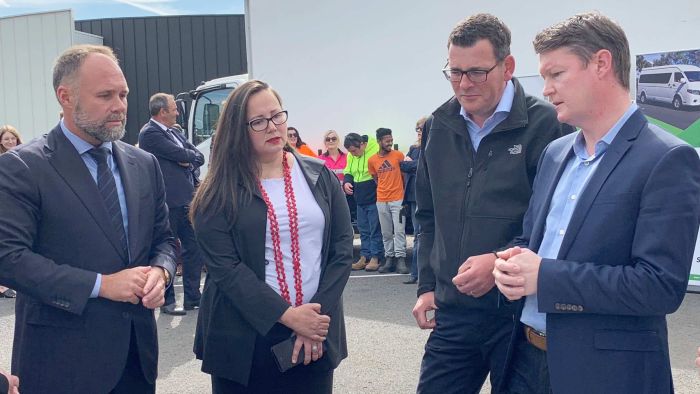 A Victorian Government minister has refused to confirm whether an electric vehicle factory promised during the 2018 state election will still go ahead in the Latrobe Valley, east of Melbourne.

On the opening day of the campaign, Premier Daniel Andrews announced a deal with the company SEA Electric to create 500 jobs by building the factory in the marginal seat of Morwell.

The first vehicles were expected to roll off the production line 12 months later, but two years on the company is yet to secure a site for the plant.

Today, Jobs Minister Martin Pakula told Question Time he was “not in a position to provide that sort of categorical answer” about whether the project would go ahead after receiving questions from Morwell MP Russell Northe.

“The fact of the matter is, Speaker, there has been some disagreement between the Government and the company in regards to whether or not milestones have been reached by the company,” Mr Pakula said.

“The department’s view is certainly that some milestones in the grant agreement haven’t been reached, and, therefore, the milestone payments that would correspond with those milestones have not been paid.”

He said Regional Development Minister Jaclyn Symes and her office were handling discussions with the company and discussions were ongoing.

“So at some point, understandably, those conversations will reach a conclusion, at which point the answer to your question, I suppose, will become clearer,” Mr Pakula said.

“But at this stage, those discussions continue to occur in good faith and I think the parties remain hopeful of a resolution.”

The ABC has approached SEA Electric for a response.

Mr Northe said Mr Pakula’s answer to his questions left him “enormously concerned” about the future of the project.

“This was a significant announcement prior to the 2018 election, supported right across the community, supported across the political spectrum, supposedly delivering 500 local jobs in a unique and growing industry,” Mr Northe said.

“Now it seems that it is truly in jeopardy two years down the track and it’s just a gross disappointment.”

He accused the Government of a lack of communication about the project after it was announced and said he hoped the project would go ahead.

“I can only hope that some resolution can be found and that the Government honours a commitment that they announced two years ago,” Mr Northe said.

Mr Andrews announced the deal with SEA Electric to set up an electric vehicle factory in the Latrobe Valley on the opening day of the 2018 state election campaign.

The deal was announced less than two years after the closure of the nearby Hazelwood power station at a time when the Victorian Government was spending $266 million to stimulate job growth in the Latrobe Valley.

It was the centrepiece of Labor’s campaign to recover the marginal seat of Morwell, which it held for 36 years until Mr Northe won it for the Nationals in 2006.

In 2018, Mr Northe contested the seat as an independent after moving to the crossbench months earlier and successfully held off Labor’s challenge with 51.84 per cent of the two-candidate preferred vote.

The agreement was meant to create 500 jobs in the Latrobe Valley, but documents released to the ABC under Freedom of Information laws showed it could create less jobs than expected.

The documents showed the Government’s deal with SEA Electric was for 300 jobs in the first phase and “up to” 200 additional positions in stage two, conditional on the second stage going ahead.

The documents also included a ministerial briefing which showed the Government expected the company to have “secured and built” a factory site in the Latrobe Valley by December 2019.

After the election, SEA Electric hired a number of Latrobe Valley residents to work in its Dandenong factory as part of its deal with the Victorian Government.

It also signed a memorandum of understanding with local education provider TAFE Gippsland to offer courses related to the manufacturing of electric vehicles.

In September last year, the company approached Latrobe City Council to lease a site at the council’s Gippsland Logistics Precinct for the factory.

The matter was deemed confidential, but updates in council meeting agendas reveal a report into the proposal was prepared for council in April before work on preparing a draft lease began in June.

The documents included an update on July 7 that “discussions [are] continuing with State Government in relation to milestones for the lease agreement”.

In May, Mr Pakula told Parliament’s Public Accounts and Estimates Committee 59 jobs had been created as a result of the Government’s deal with SEA Electric.

US big-ticket factory orders up 1.2% in February