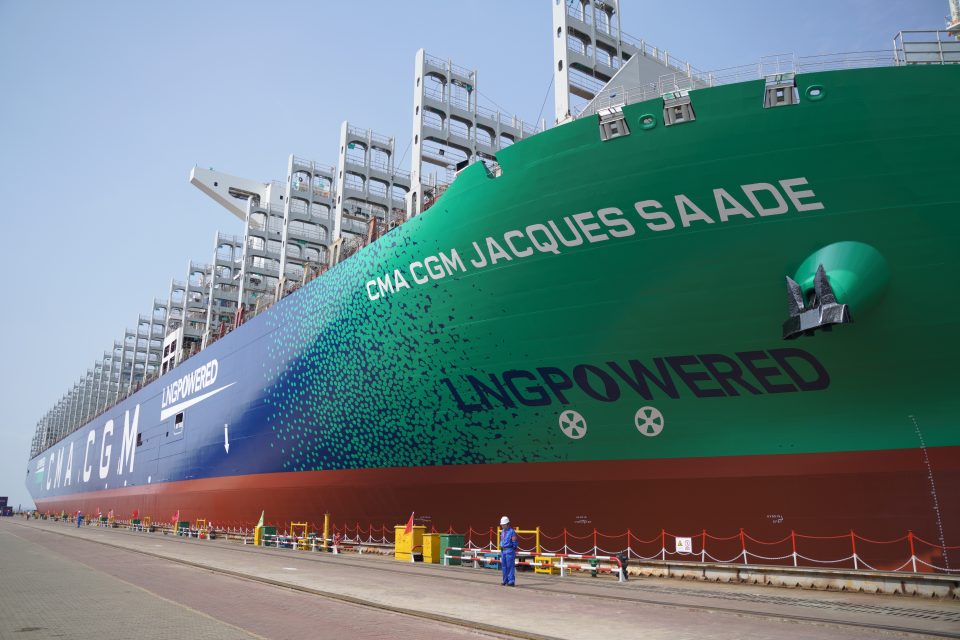 The CMA CGM Jacques Saadé is the first of the French shipping line’s nine planned 23,000-twenty-foot-equivalent-unit (TEU) container ships powered by LNG. The vessel is named in honor of the CMA CGM Group’s founder, the late Jacques Saadé.

While the Jacques Saadé will not call the United States, CMA CGM made waves in North America earlier this month with the 15,072-TEU Brazil, the largest vessel to call the East Coast, visiting the ports of Halifax, Nova Scotia; New York and New Jersey; Virginia; Savannah, Georgia; and Charleston, South Carolina.

CMA CGM said the first-of-its-kind virtual naming ceremony for the Jacques Saadé this week involved shipyard representatives in Shanghai and the group’s management in Marseille and marked “an emotional landmark moment” in the company’s history.

Saadé launched the Compagnie Maritime d’Affrètement (CMA) in 1978 with four employees, one ship and one maritime service between France and Lebanon. He acquired Compagnie Générale Maritime (CGM) when it was privatized in 1996, then merged the two companies, which led to the birth of the CMA CGM Group in 1999. He died in June 2018.

His son, Rodolphe Saadé, now leads the CGA CGM Group as chairman and chief executive officer. He announced in November 2017 that the new series of container ships would be equipped with LNG-powered engines — a first in the history of shipping for ultra large container vessels, the company said.

CMA CGM said in the naming announcement this week that “LNG is the most advanced solution when it comes to preserving air quality. It enables a 99% reduction in sulfur dioxide and fine particle emissions and an 85% reduction in nitrogen dioxide emissions, going well beyond existing regulation. LNG emits up to 20% less CO2 compared to fuel motorization.

“This technology is one of the first steps toward achieving CMA CGM Group’s ambitious 2050 objective of carbon neutrality,” it said.

CMA CGM said the nine new ships are “packed with innovations” and the result of seven years of research and development. For example, the cockpit is outfitted with the latest digital technologies to assist the commander and crew, particularly with port maneuvers.

The company hailed “an extraordinary construction project that mobilized the know-how and expertise of CMA CGM Group’s experts and their industrial partners.” CMA CGM said those partners included:

• CSSC, the shipyard in Shanghai that constructed the Jacques Saadé.

• Cryostar, a French expert in cryogenic equipment that provided the LNG pumps.

• Bureau Veritas, a French classification company in charge of guaranteeing the certification of the Jacques Saadé and its sister ships.

• BLM, a French company that provided winches and windlasses.

• GTT, a French technology and engineering expert in membrane containment systems selected for the design of LNG tanks and related technical services.

• Total and the Port of Rotterdam, which provided LNG refueling services.

The Jacques Saadé is 1,062 feet long — about equal to the height of the Eiffel Tower. The eight sister 23,000-TEU, LNG-powered CMA CGM vessels will be named for other Parisian landmarks: Champs Elysées, Palais Royal, Louvre, Rivoli, Montmartre, Concorde, Trocadéro and Sorbonne.

“The CMA CGM Jacques Saadé embodies our commitment to the planet,” said Rodolphe Saadé. “While guaranteeing the safety of our crew, it preserves air quality and will be part of our fight against global warming. It significantly improves the environmental footprint of carried goods. We have taken a big step forward. We need to go further to build transport that is even more respectful of the environment.”

Nothing stands in Chloe’s way