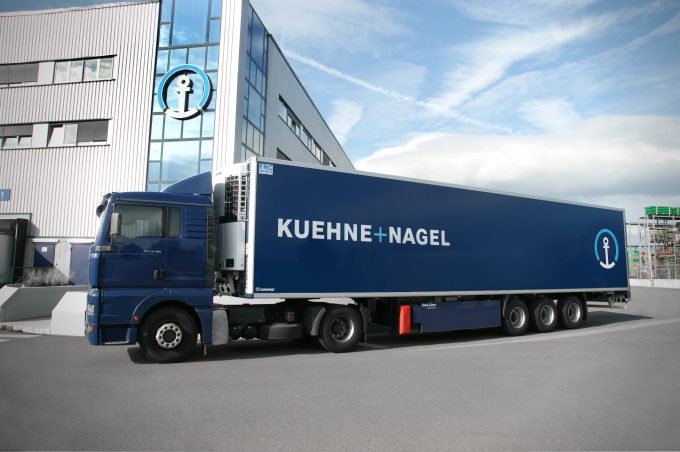 Kuehne + Nagel (K+N) is one of the first major forwarders to report Covid-impacted results, so is likely to act as something of a marker for others in what will undoubtedly be a tough quarter.

“In this situation, Kuehne + Nagel maintained its operational performance, closely managed a number of specialty businesses and won new customers. In the case of basic commodities and pharmaceuticals, transport volumes were maintained at a respectable level.”.

In sea freight, the company said, it was affected “at an early stage”. However, exported perishables from Latin America and reefer shipments, which included pharma, “developed well”. But volumes in teu were down 6.2% year on year.

In air freight, the large number of cancelled passenger flights affected results as capacity dropped about 60% in just a few weeks. However, there was also a drop in demand – although, inevitably, short -term charters for pharma and time-critical saw bigger demand. As a result, volumes fell 9%, while net turnover dropped 6.8% to Sfr1.1bn, while gross profit fell 5.8% to Sfr307m and ebit dropped 11.3% to Sfr71m.

Road Logistics saw volumes in Europe drop from March onwards, while North America experienced a fall in intermodal volumes. Only e-commerce and pharma were unaffected. Net turnover fell 4.2% to Sfr863m, gross profit fell 1.4% to Sfr281m and ebit fell 29.2% to Sfr17m.

But the greatest fall in ebit was in contract logistics, which dropped 34.6%, as automotive and retail saw demand fall. Net turnover fell 6.1% to Sfr1.2bn, gross profit was down 4%.

All K+N business units were affected by negative currency impacts. But the forwarder said it had not experienced any “major disruptions to its operations”.

It said: “While demand in certain industries such as pharma, healthcare, hi-tech and e-commerce has increased, volumes of some other industries, especially automotive and perishables reduced significantly.

“In China, the major part of production has resumed, but the overall progression of the Covid-19 pandemic remains volatile and difficult to predict.”

It noted that “the impact on business growth and profitability cannot be quantified at this stage as it depends on the duration and severity of the pandemic”.

However, K+N said that outside the coronavirus, it had made some progress: it acquired Rotra and Joebstl, which had been “integrated as planned”, and its performance in Asia was “encouraging”, with more demand for its digital platform, eTrucknow.

Other digital platforms, including AirLOG, also saw progress, and its CO2-neutral sea initiatives, which see all emissions from less-than-containerload (LCL) shipments offset, remained in demand with customers.

Dr Trefzger said: “Our company will face major challenges in the coming months, but is well-positioned in view of its customer proximity, agility and digital offerings. A high level of liquidity characterises the company’s solid financial strength.”

K+N described its results as “resilient”, but Loadstar Premium chief Alessandro Pasetti noted: “If it was this bad for K+N, what about all the other 3PLs?

“And core free cash flow isn’t as good as promoted at the top of the analyst presentation. I thought Q1 might have been mildly stronger, but it was broadly in line – we all know Q2 is when it’s going to be really painful.”

You can find out more on Loadstar Premium here.

You can see K+N’s full results here, and its analyst conference presentation here.

Stepping Up Your Global Supply Chain in 2020

Aire Networks, a major telecommunications wholesaler, reinforces its offer for companies with the purchase of Lcrcom

The Strategic Rebirth of Procurement