HOPE — Randy Bradley was 14 when he first heard music through Klipsch speakers.

“Have you ever listened to Klipsch speakers,” he asks. “It’s like a religious experience.”

His father was stationed with the U.S. Air Force in Wiesbaden, Germany, and Bradley was babysitting for neighbors who owned a stereo that was hooked to a pair of Klipsch Heresies.

“It was some sort of classical music,” he says. “I don’t remember what, particularly, but it sounded so good to me. I told myself that someday I’m going to have a pair of speakers like that.” 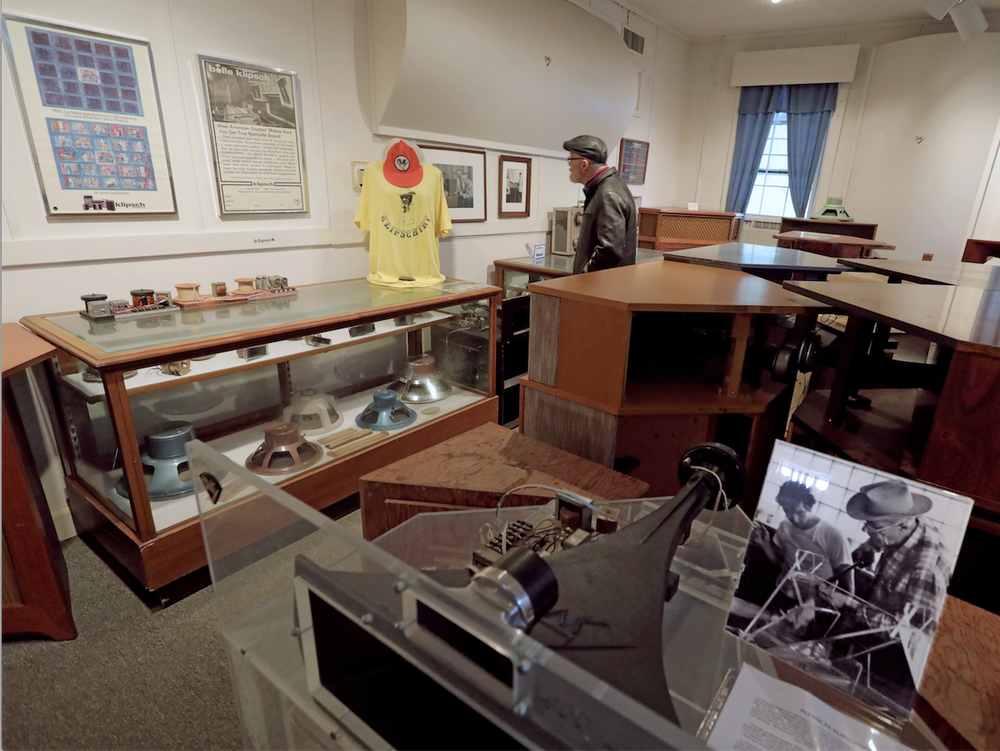 Randy Bradley of Tulsa looks at items during a visit to the Klipsch Museum of Audio History in Hope. Bradley is a devoted fan of the high quality stereo equipment made by the late Paul W. Klipsch. (Arkansas Democrat-Gazette/JOHN SYKES, JR.)

Bradley is 68 now and lives in Tulsa, where he listens to music on his 1985 Quartet model Klipsch speakers.

Such is his devotion to the speakers made in Hope that Bradley traveled with his wife, Dawn, to visit the Klipsch Museum of Audio History here on a rainy Wednesday morning last month.

The war brought an engineer and U.S. Army second lieutenant named Paul Wilbur Klipsch to Hope. When the fighting was over he stayed, building his high-end audio business on the strength of the Klipschorn, a speaker designed to be placed in a corner for maximum listening experience.

Klipsch headquarters are now in Indianapolis, but Klipschorns, along with select other models of speakers, are still made in Hope.

Klipsch was born March 9, 1904, in Elkhart, Ind. A polymath and inveterate tinkerer with an eccentric streak, he made his first radio speaker out of a pair of headphones and a cardboard mailing tube when he was 15.

He graduated from New Mexico State University with a degree in electrical engineering and had been through several careers before arriving in Hope. He designed radios for General Electric, worked on electric locomotives at a nitrate mining company in Chile when he was 24, spent time as an oil prospector, was an accomplished pilot, a gun enthusiast, photographer, amateur filmmaker and earned a postgraduate engineering degree from Stanford University in 1934.

Klipsch was the kind of fella who made his own slide rules and was awarded more than 20 patents related to oil discovery, firearms and, of course, audio systems. 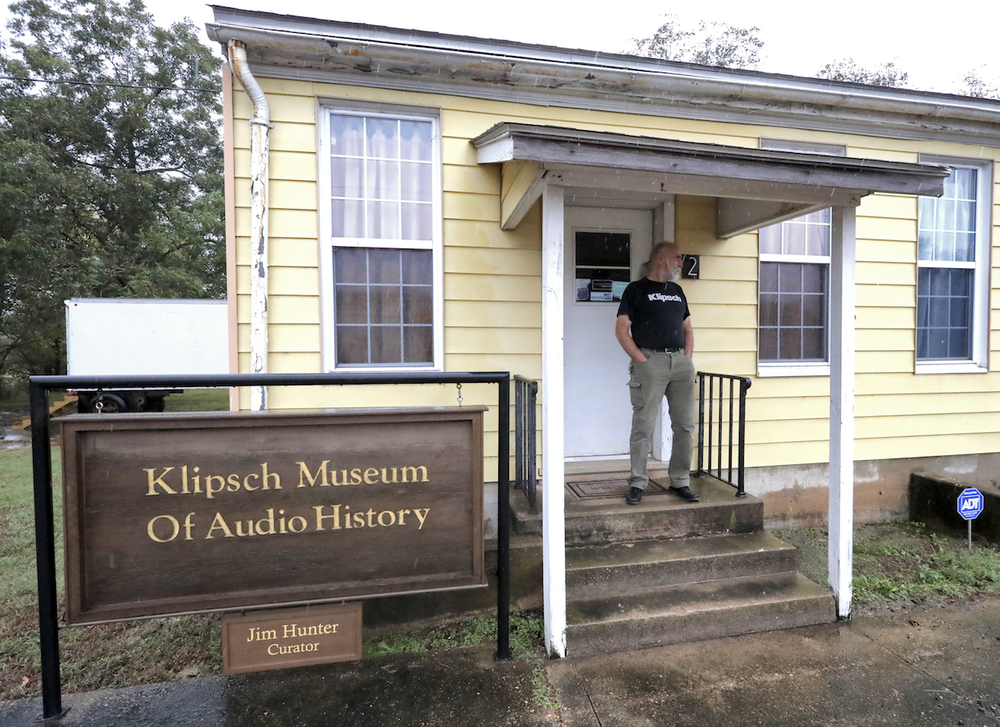 Jim Hunter, on the porch of the Klipsch Museum of Audio History, came to work at Klipsch as an engineer in 1978 and is now the museum’s curator. (Arkansas Democrat-Gazette/JOHN SYKES, JR.)

If one is curious about Paul Klipsch, Jim Hunter is the man to see. He’s not hard to find, as he leads tours of the nonprofit museum devoted to the legacy of his former boss, who died May 5, 2002.

Hunter came to Hope to work as an engineer for Klipsch in 1978. He’s retired now and has been combing through Klipsch’s archives for the museum, a task made easier because “the man saved everything,” he says.

In the first room of the museum, for example, are the headphones from 1919 Klipsch used to make his first speaker. The Paul W. Klipsch Education Center at the Hope Municipal Airport contains thousands of technical journals Klipsch had collected since the 1920s.

Hunter, a history enthusiast who collects antique tools and glass, says that among the items Klipsch left were 4,000 photographs and 10,000 slides and stacks of letters he exchanged with customers.

“He was obviously very smart,” the 67-year-old Hunter says when describing Klipsch. “He had a great, dry sense of humor, and he would not suffer fools.”

Klipsch, who was married twice, was frugal and lived in a “dump” after the war, Hunter says. “He finally bought a bigger house in 1975,” but it wasn’t extravagant or flashy. “He did have a pool out back, and he had a model train around the privacy fence that he would use to deliver a can of beer [to guests].”

“He studied it for 23 years, and he made all of the parts — the pistons, the cylinders, the rods. He made molds in three different sizes to cast the wheels. And it worked.”

He took to wearing a button that said “Bull****” inside his jacket lapel. When he thought someone was feeding him a line, he would turn the lapel around to reveal the button. 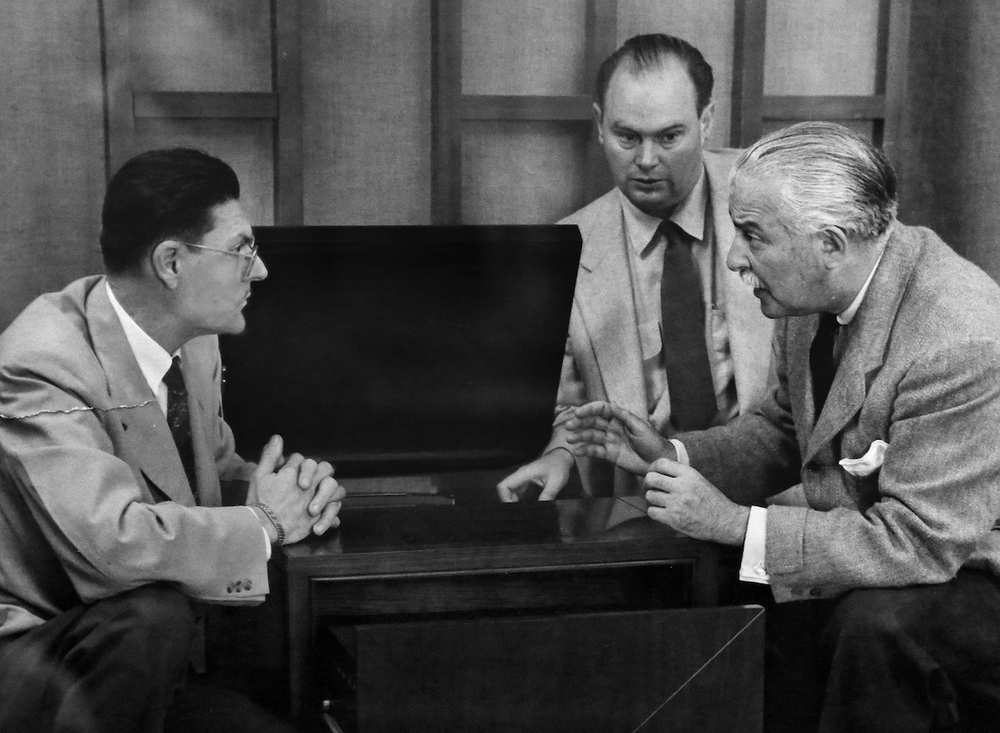 Klipsch had gotten into audio gear as a hobby in the 1930s. At the time, movie theaters were about the only place a person could enjoy high fidelity sound reproduction. He wanted to make that kind of sound quality available for the home.

“Paul designed the Klipschorn in his spare time during WWII,” Hunter says. It wasn’t the first speaker to use the shape of a corner to help produce better sound, but it improved on the “corner horn” concept.

The body of the cabinet that houses the speaker forms a shape like a baseball diamond, with the pointy rear open and the front covered with a wood panel.

Standing about four feet tall and about three feet wide, it was actually designed as a compact speaker and, when situated in the corner of a room, excelled at putting out big volume with minimum effort.

“For the same amount of electrical power in, you get a lot more sound out,” Hunter says.

(This is a good place to note that Hunter is wearing a black T-shirt with the name Klipsch on the front and a statement on the back that reads “Pissing off the neighbors since 1946.”)

“One Klipschorn has the acoustic horsepower of a 100-piece symphony orchestra,” Hunter says.

Arthur Fiedler, conductor of the Boston Pops Orchestra, endorsed Klipsch speakers and the museum now has the Klipschorn from Fiedler’s home.

“In the 1950s, there were dozens of companies that had some sort of corner horn in their lineups,” Hunter says. “The Klipschorn is the only survivor.”

Among the other speakers developed by Klipsch are the Heresy, Rebel, Shorthorn, Cornwall, La Scala and Belle Klipsch.

If you’re in the market, two new Klipschorns retail for about the same as a small car. 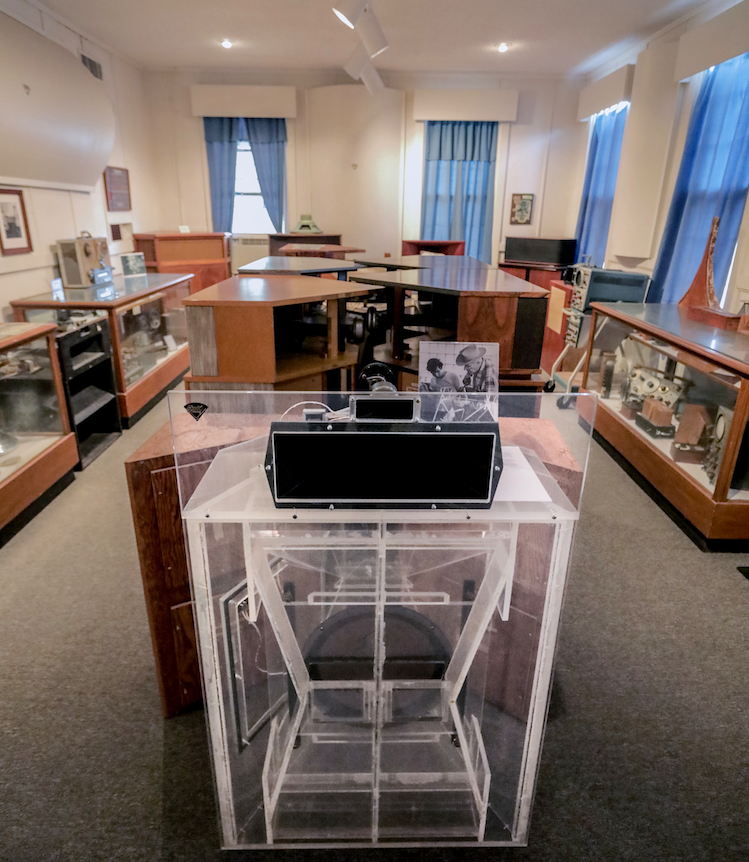 A version of the Klipschorn speaker made with Plexiglass. The Klipschorn was the flagship model of Klipsch & Associates, the stereo speaker maker in Hope. (Arkansas Democrat-Gazette/JOHN SYKES, JR.)

When he was a 13-year-old budding music fan in Ashdown, he went shopping with his father at Sound Towne in Texarkana for an upgrade to the family’s stereo system. That’s when he heard the Talking Heads’ concert film Stop Making Sense through Klipsch speakers.

“They had a room set up with Cornwalls in the front and Heresies in the back. That was the first time I saw a surround-sound setup … They played Stop Making Sense, and it was like, ‘Oh, my God, what is this?'”

There was also a demonstration using a battle scene from movie The Empire Strikes Back, but it was the quality of the music coming through the speakers that really struck Hill.

Alas, Hill’s father didn’t buy the expensive gear — he picked up a Pioneer system on clearance from Walmart instead — but the Sound Towne demonstration left an impression on his 13-year-old son.

In a story that echoes Randy Bradley’s experience in Germany, Hill promised himself that when he grew up he would make enough money to own Klipsch speakers.

“I’m a huge fan of live music, and I’ve never heard another set of speakers that reproduce live sound [better],” Hill says. “You can sit and listen with your eyes closed and pick out spatially where each member of the band is … it sounds like I’m sitting there in the studio with John Coltrane or Stevie Ray Vaughan.” 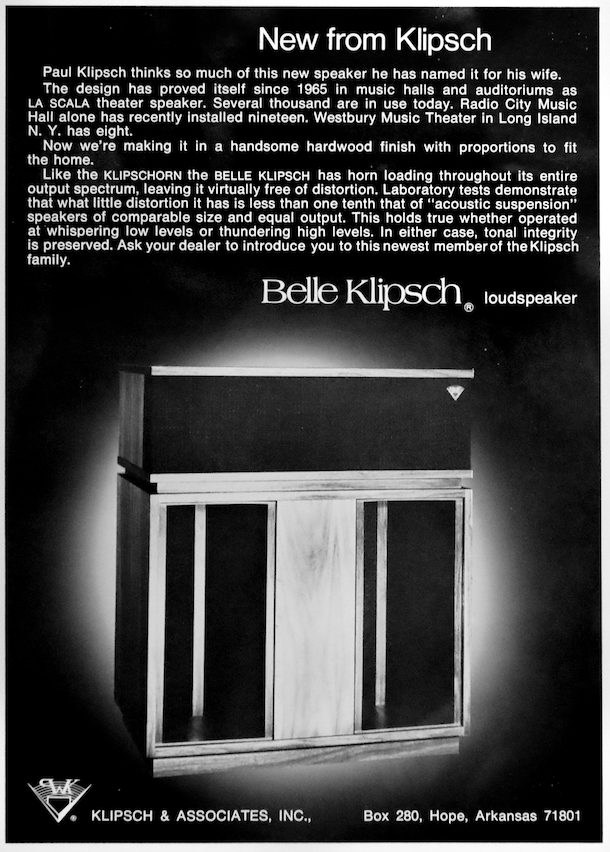 This is a magazine ad for the Belle Klipsch speaker at the Klipsch Museum of Audio History.

The Klipsch Museum of Audio History is open Wednesday-Friday from 10 a.m.-2 p.m. and also by appointment. For information, visit klipschmuseum.org or call (833) 794-5287.

Hill remembers going to Hope several years ago and seeing the museum in its early stages, when guests got a key from the factory next door and showed themselves around. It’s a much different process now, with Hunter guiding visitors through the collection he has curated and sharing his knowledge of all things Klipsch.

“I remember thinking that someone needs to take this on and preserve this stuff, and I’m very excited to see that has happened,” Hill says.

The nonprofit museum was formed in 2016 and opened in 2017. There is a nine-member board from five states.

A tour of the neatly arranged artifacts takes about 45 minutes, and visitors learn not only about Klipsch but also about Hope, the Southwest Proving Ground and the early days of audio technology.

Hunter says one of the museum group’s aims is to use Klipsch’s life and work to create interest in Science, Technology, Engineering and Mathematics education. The museum hosted a talk by Hill at the education center last month on the production of vinyl records.

Hunter is showing visitors around the center, pointing out rows of shelves containing Klipsch’s collection of technical journals, the bandsaw he used and original molds for speakers.

“Long term, our mission and vision is all about STEM education,” he says. “We finally have a place to do it now.”

Switzerland- The stolen childhood of the factory children