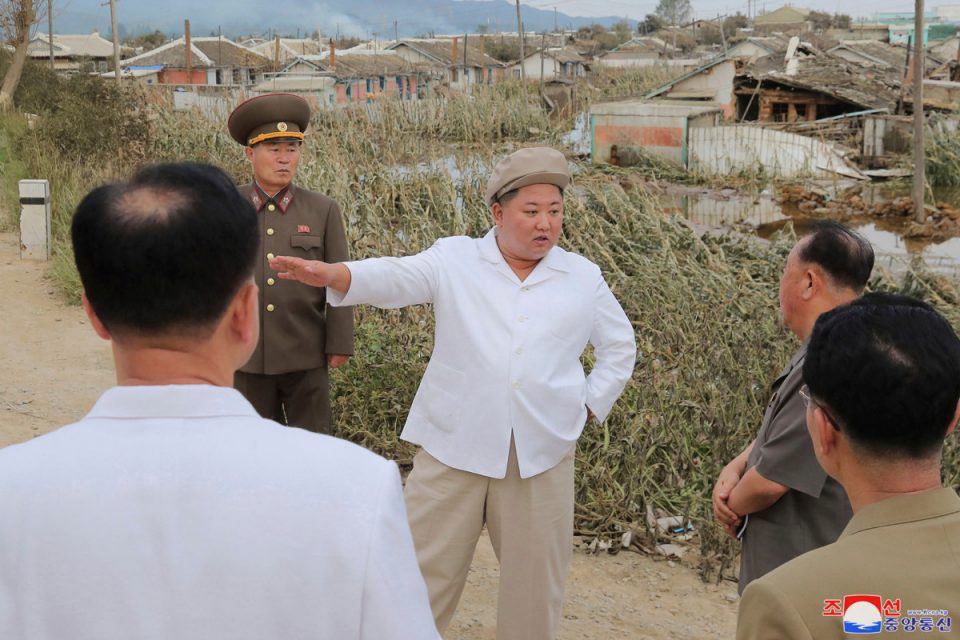 North Korean state media on Sunday released photos of leader Kim Jong Un paying a visit to coastal areas hit by a typhoon — where he fired a top official over his response to the natural disaster.

Images from the Korean Central News Agency showed the 36-year-old dictator in a white shirt, beige slacks and matching military-style puffed cap surveying the damage in the stricken South Hamgyong province with his deputies on Saturday.

The state-run news agency said Kim was briefed that Typhoon Maysak destroyed more than 1,000 houses and inundated public buildings and farmland when it struck the South and North Hamgyong provinces last week.

The Hermit Kingdom’s main Rodong Sinmun newspaper said Saturday that “dozens of casualties” were reported in Kangwon province, south of the Hamgyong provinces.

North Korea’s ruling party has called for local officials to be “gravely punished” for failing to follow orders during typhoons, such as evacuating residents to safety, the newspaper said.

Kim dismissed Kim Jong-il, the chairman of the South Hamgyong Provincial Committee of the Workers’ Party and appointed a successor, according to KCNA.

He also promised to send 12,000 members of the ruling Workers’ Party from Pyongyang to aid in recovery efforts.

The isolated nation has been grappling with heavy rains, floods and typhoons in one of the wettest rainy seasons on record. It was bracing for its 10th typhoon of the season, which was swirling in the East China Sea over the weekend.

The despot toured a western coastal area hit by another typhoon late last month and visited other places struck by torrential rains and floods earlier in August.

“Kim Jong Un’s more frequent visits to the provinces are intended to show a ‘leader of the people’ response to natural disasters,” Leif-Eric Easley, a professor at Ewha University in Seoul told the Associated Press.

“But this is also blunt recognition that the elite in Pyongyang are not self-reliant. Kim’s increased attention to farmers reflects a worrying food supply situation in the country. ”

The appearance also followed allegations that Kim had been in a coma.

How to Successfully Digitize Your Supply Chain