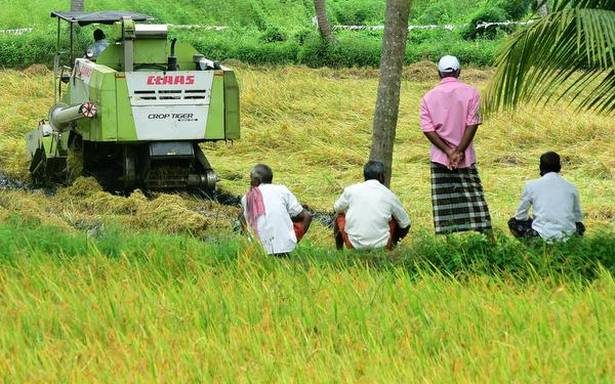 A comprehensive welfare fund for farmers, a long-felt need in Kerala’s agriculture sector, is finally becoming a reality. The weekly Cabinet meeting held on October 7 has decided to set up a Farmers’ Welfare Fund Board as per a law passed by the State Assembly in December 2019. An official press statement said, “it is the first time in the country that such a Board has been set up for the welfare and uplift of farmers.”

The Kerala Farmers’ Welfare Fund Act was passed by the Assembly on December 20 last year with the objectives of “providing for the welfare of farmers engaged in agriculture in the State”, “paying pension and other allowances to them” and “attracting the younger generation into agriculture.”

A “farmer” for the purpose of provision of benefits under the Act is defined as one who is over 60 years of age and who has been primarily engaged in agriculture for not less than three years, and “who holds, whether as owner or licensee or mortgagee… land not less than five cents and exceeding 15 acres and has an annual income less than Rs 5 lakh.”

Farmers above the age of 18 engaged in growing of crops and intercrops, horticulture, medicinal plants, fruit trees, vegetables, grass, fodder grass trees or any kind of cultivation in soil, conducting nursery, and all allied activities such as dairy and poultry and breeding fish, ornamental fish, mussel, oyster, bees, silk worm, poultry and so on as mentioned in the Act can become members of the Fund.

The welfare fund will have a contribution of a minimum of Rs.100 from each member farmer (who has the option of remitting the monthly contribution at a higher rate at his/her own discretion), an equivalent amount (or more up to a maximum of Rs.250) by the State government, the contribution already being paid by the government for payment of Rs.300 as pension under an existing Kisan Abhiman Scheme and income generated from sale of Welfare Fund Stamps (that are to be affixed on applications for agriculture needs).

In addition, the law provides for collecting from traders selling value-added agricultural products one per cent of their annual profit as ‘agriculture incentive’ as a matter of right of profit-sharing contribution to the Fund. The incentive is however to be collected only from traders whose annual profit is more than Rs.1 lakh.

The fund is not limited to payment of pension to member-farmers on the basis of contribution remitted and the number of years of remittance. It also provides for family pension and death benefits, and financial assistance for members suffering from permanent physical and mental disability, for treatment, maternity needs, marriage of women members or daughters of members and education of children. It will also provide compensation to members or their families for accident and death or disability caused by natural calamities, poisoning of various kinds and attack of wild animals, as per a scheme prepared under the terms of the Act.

Member-farmers are also required to join an insurance scheme as decided by the newly constituted Kerala Farmers’ Welfare Fund Board.

The Left Democratic Front government describes the fund as one among the many alternatives it is proposing for State farmers vis-à-vis the policies of the Central Government, in addition to promoting farming and marketing by cooperatives, as part of its slogan Cooperatives against Corporates. As reported earlier, the State government is also promoting farmers’ groups to engage in group farming and in the marketing of agriculture and value-added products without middlemen.

In a significant initiative, 105 primary agriculture cooperative societies in the State have been entrusted from the current season onwards to procure paddy from farmers at a minimum price of Rs 27.48 in the major production centres in Palakkad, Thrissur, Alappuzha and Kottayam districts. The paddy procured from Palakkad district, which accounts for nearly 45 per cent of the total production in the State, is to be milled and absorbed into the public distribution system in the State itself. The procurement from other districts is to be made into rice by the Kerala Civil Supplies Corporation (‘Supplyco’) and transferred to the Food Corporation of India.

The absence of effective procurement by the State had often led to paddy farmers being exploited by private traders and mill owners. Procurement by cooperatives provides an assured market for the farmers and immediate payment for their produce. The cooperative societies will arrange for procurement from farmers by Supplyco officials who will issue Paddy Receipt Sheets to the farmers, which they can then encash the same day from the local branch of the Kerala Bank (until recently Kerala State Cooperative Bank). Minister for Cooperation Kadakamkampally Surendran said while announcing the new arrangement that “it will help avoid exploitation of paddy farmers by the private traders almost completely.”

Questions Emerging About Investigation of Alleged Contamination at 6/10 Project