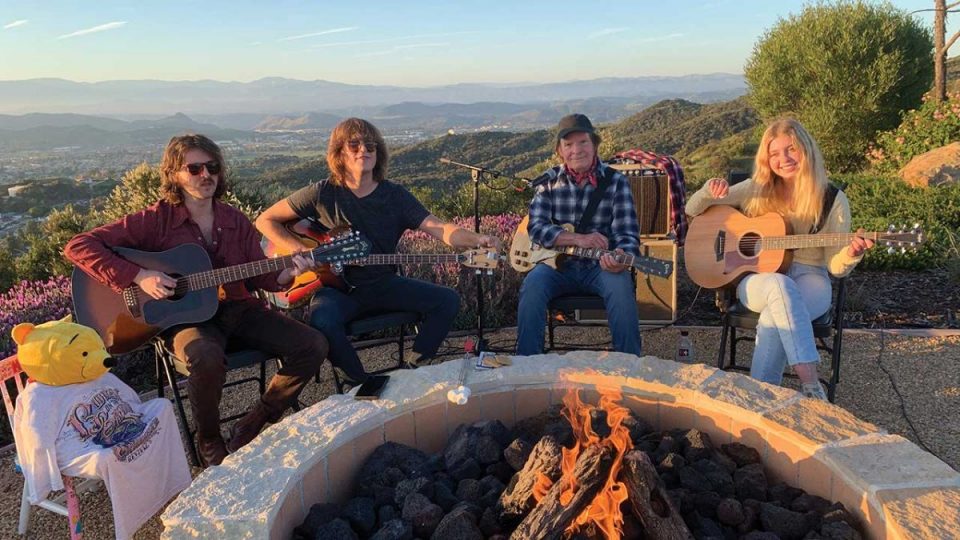 When future musicologists look back at 2020, it’ll be apparent that some musicians faced down the the year’s challenges better than others. One such musician is Creedence Clearwater Revival frontman John Fogerty.

Throughout lockdown, Fogerty and his children – Shane, Tyler and Kelsey – have filmed a series of Creedence and Fogerty songs that did exactly what was required: make the viewer forget their troubles for a few short minutes.

The first clips were filmed in Fogerty’s backyard in Ventura County, California and uploaded to YouTube, but as they gained in popularity they found other homes: NPR’s Tiny Desk Concerts series, and on The Late Show With Stephen Colbert.

On John’s 75th birthday the family upped the ante further, gathering at an empty Dodger Stadium in Los Angeles to film a cover of Centerfield, the title track from Fogerty’s 1985 solo album.

The audio from all the various sessions was compiled for an EP release, but the family has continued recording, and now Fogerty’s Factory will be released as a full-length album with a revised tracklist.

“When the world stopped in March due to the pandemic, the news was bleak and scary,” says Fogerty. “We were all unsure of everything we once knew or took for granted. However, it also brought many of us together, we soon found we had time we never had before.

“Our family wanted to do something that might bring a smile or help others, so Julie suggested we bring music to ease some of the pain we were all feeling. In our family, music has brought us so much joy and we thought we could somehow share that joy in a pure, unscripted form.

“So, we gathered in our home studio and created music. There were many instruments the kids picked up for the first time, especially Kelsy who had just started playing guitar and even played drums for the first time. She was a senior then and wasn’t able, like so many, to enjoy her last year of high school. This was a wonderful way of connecting with our family and fans through music.”

The family also recreated the cover photo from the classic Cosmo’s Factory release, using similar props to create the cover of Fogerty’s Factory (see below).

“Julie had said let’s call this Fogerty’s Factory!,” says John. “There we were, the whole family coming together and producing music with no real purpose other than to share our love of music and family in a very difficult time. We even re-created the iconic Cosmo’s Factory cover using things we had around the house.  Remember no stores or fancy productions were used since nothing was open. It came out perfectly.”

Amazingly, despite being released 50 years apart, both covers were shot by the same photographer, brother Bob Fogerty.

Fogerty’s Factory will be released on CD/Digitally on November 20, while a vinyl edition will come out on January 15 next year.

What Pharma Dispensers Need to Do to Comply with U.S. Drug Supply Chain Security Act